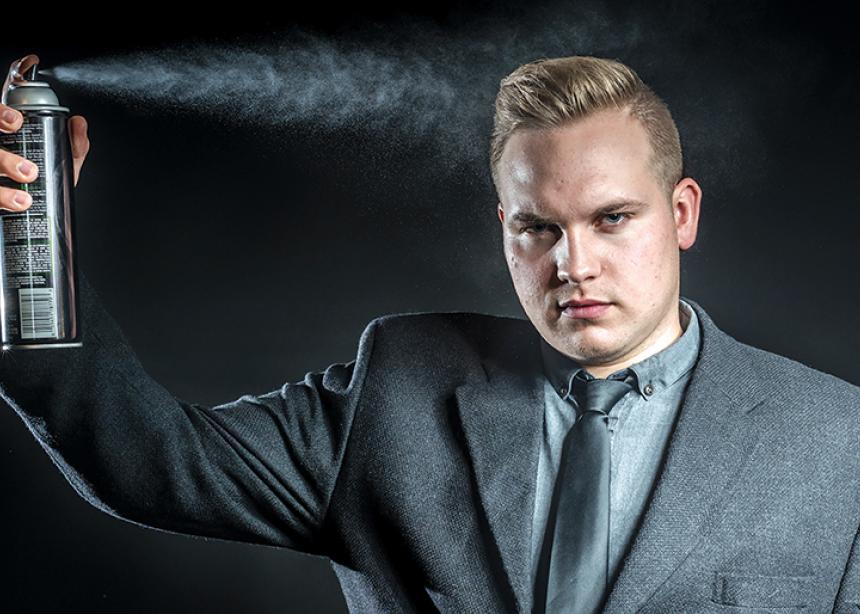 For most comedians, delivering unfiltered material means cursing a blue streak. For Matt Falk, it means something else entirely.

Being that explicit about his faith during the performance, Falk says, “was deliberate and, in a sense, it was not deliberate.” The bit evolved over the months he spent preparing the material in the lead-up to filming the performance that’s on the DVD. At first, it included hedged language that made no mention of God. But as he continued to work on the material, he got it to a point where he could say what was really on his heart.

“I had to make the decision not to filter myself,” the 28-year old says during a phone interview from his home in Niverville, Man. “For a lot of comedians, being uncensored means saying things a little dirtier, but for me, being unfiltered [and] being uncensored is sharing what’s deep in my spirit.”

Filmed in May 2015 at the Garrick Centre in Winnipeg, Generational Gaps captures 70 minutes of material that Falk developed after the release of his first album, 2012’s Apple Pie & Scars. It’s the visual companion to the Generational Gaps album that came out this past June. Crown Entertainment will release the DVD across Canada and the United States on Feb. 14.

“It feels amazing,” he says of the DVD’s imminent release. A fan recently told him that he listens to the Generational Gaps album every day, and he has been eagerly anticipating the release of the DVD because it will allow him to see the things that people are laughing at when there’s a pause on the album, presumably because Falk is making a funny face or miming an amusing action.

“That, as a comedy nerd, blows me away, because I distinctly remember growing up listening to Robin Williams’s CDs, hearing laughs where there’s no dialogue and thinking, ‘What’s he doing there?’ ” Falk says. “The fact that people are doing that with my work is really cool.”

The release of Generational Gaps on DVD is just the latest in a long list of things Falk has accomplished since he began performing stand-up in his late teens. In 2010, he placed second out of 285 contestants in the World Series of Comedy in Las Vegas. Since then, he’s performed across North America with the likes of Gilbert Gottfried, Dave Coulier and Andy Dick—all while maintaining an act that is 100 percent clean, meaning it is free of vulgar material.

In 2017, he continued to perform across North America, including appearances at the Winnipeg and Halifax comedy festival. Those sets were filmed and CBC will broadcast them later this year.

In his personal life, Falk and his wife Sabrina saw a years-long dream come true when they adopted a child from South Africa who officially joined their family just before Christmas.

“It’s been remarkable. He’s by far the best thing that’s happened to us,” Falk says, adding without missing a beat, “apart from our salvation, and you always have to say that. . . because if you don’t say that, God overhears and he gets upset.”

The nature of the comedy business is such that comedians typically have a lot of things in the works, but the majority of them don’t come to fruition. As such, Falk is reticent to name his future plans.

One sure thing, aside from the DVD release, is that he has performances coming up in B.C. and Manitoba this month. The act features new material that he has developed since filming Generational Gaps, and people who go to see him perform can expect to hear more of his unfiltered views on faith.

“Right now I have a bit in my act that talks about my baptism,” he says. “Some people get uncomfortable when I talk about it, some don’t. But this is a part of my life, this is something that’s happened to me, that I’ve found humour in and I want to share it.”

“I’m not perfect by any stretch of the imagination,” he adds, “but I’m becoming less filtered as the years go on.” 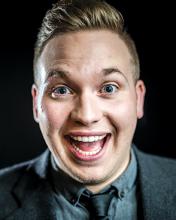 ‘It feels amazing,’ Matt Falk says of the upcoming release of Generational Gaps on DVD. (Photo courtesy of Matt Falk)