UNDRIP: Good news for everyone 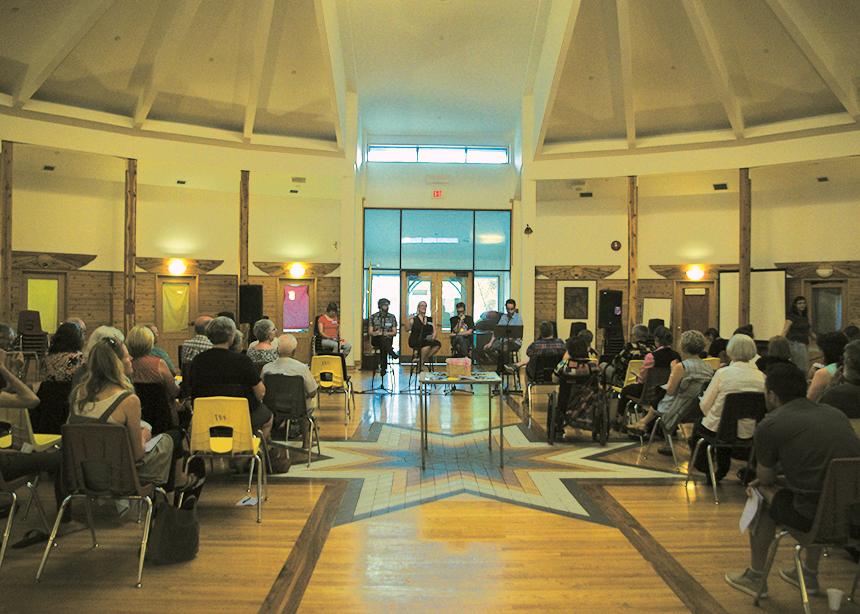 Canada has violated the rights of its Indigenous peoples ever since the country was born, from forcing thousands of children into residential schools to disrespecting treaties and stealing land. In 2007, the UN General Assembly adopted the United Nations Declaration on the Rights of Indigenous Peoples (UNDRIP), and Canada announced its support for the declaration in 2010. However, there are still many decisions being made in Canada that don’t line up with the declaration, such as plans for pipelines in spite of objections by thousands of Indigenous and non-Indigenous Canadians.

Around 70 people gathered on June 22, 2018, at the Circle of Life Thunderbird House in Winnipeg to learn why UNDRIP is good news for everyone. The Building Bridges event with the title, “Good for us all: UNDRIP and the church,” was hosted by Mennonite Church Manitoba (MCM) and Mennonite Church Canada. It preceded a weekend full of activities celebrating Canada’s National Indigenous Peoples Day (June 21), including “147: Pathways to treaty relations,” another event in which MCM was involved.

A panel of speakers shared their thoughts on engaging with specific articles of the declaration. It consisted of Brenda Gunn (professor of law at the University of Manitoba and expert on UNDRIP), David Driedger (pastor at First Mennonite), Marcus Rempel (author of Life at the End of Us vs. Them: Cross Culture Stories) and Lynell Bergen (pastor of Hope Mennonite), and was moderated by Jamie Howison, an Anglican priest and founding pastor of St. Benedict’s Table. Geraldine “Gramma” Shingoose, a prominent Indigenous elder and activist in Winnipeg, opened the evening with some words and performed a drum song with her granddaughter Tianna Shingoose.

MCM and MC Canada have run several events on UNDRIP before, focussing on why the declaration was created and the history of the process. “Now it’s time to look at our missiology and scripture and start to imagine and engage UNDRIP with those things as well,” says Dorothy Fontaine, director of mission at MCM.

The speakers covered a variety of topics, from Indigenous peoples’ right to self-determination, covered by Gunn, to stories about food and land from Rempel, to Driedger’s reflections on respecting the privacy of Indigenous peoples’ spiritual and religious traditions.

Bergen identified why acknowledging treaty land in church is so important. “It can remind us to be grateful for this place, and the people who host us ... to care for the land we are given,” she says. “It is an invitation to repentance for our theft of this land from its original inhabitants.”

Bill C-262, a private member’s bill introduced by MP Romeo Saganash that would ensure that all Canadian laws are in harmony with UNDRIP, passed in the House of Commons on May 30. It now moves to the Senate for approval.

“I think we still need to be vigilant until it’s done but it’s very encouraging,” says Fontaine.

MC Canada and Christian Peacemaker Teams organized a 600-kilometre walk from Kitchener to Ottawa in May 2017 to show the government that this bill must be implemented. MP Robert-Falcon Ouelette thanked the organizers in his speech in the House of Commons this spring.

Although Mennonites have walked and discussed, held posters and sent hundreds of postcards to their MPs, there’s still a long way to go on the journey of reconciliation. So what are the next steps?

“I think we’re all being called to do our own thinking around reconciliation, particularly now in the communities and neighbourhoods that we live in,” says Fontaine. It will look different from one community to another. We must familiarize ourselves with UNDRIP and take guidance from Indigenous leaders, elders and grassroots organizations that are already doing incredible work.

“If we enter into things in true partnership, good things can happen. But true partnership requires listening on our part,” she says. She suggests participating in every opportunity you can get to learn directly from Indigenous people and build relationships and community together. She says it’s essential to understand Canada’s history because there are still many myths and misconceptions out there.

At the end of the evening, Gramma Shingoose thanked everyone for the beautiful evening and wished that everyone would share their learning with others. Just before the event, more unmarked children’s graves were found at the residential school in Saskatchewan she attended, and she was shaken up. Yet she still came to an event run by the church, which had played a major role in residential schools, and she expressed her love for people instead of hostility.

Fontaine says we need to draw our inspiration from people like Shingoose. “In the eyes of the world, she really is a woman of very little power or political influence, but her declaration of love is like a greater power, and it’s the foundation on which Christ stood. And we can do no less,” she says. “We need to embrace reconciliation in whatever form or shape it takes with the same kind of love.” 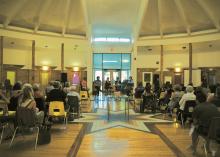 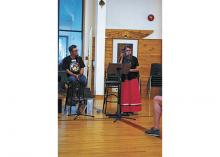 Geraldine ‘Gramma’ Shingoose speaks to those gathered at the Circle of Life Thunderbird House in Winnipeg. Marcus Rempel (left) was part of a panel. (Photo by Nicolien Klassen-Wiebe)

The opening comment has some truth and masks a harsh reality in the history of Canada. Irish and Scots immigrants were treated with disdain and cruelty when they came to Canada. After them, Jewish persons were not well liked and discriminated against. After them, Chinese, East Indian and Japanese immigrants. The Orange Order marched against Mennonites in Regina. Does anyone remember legislation against Hutterites, Doukobours and Mennonites? Not to mention the incarceration of Ruthenian immigrants as enemy aliens. And through this all, slowly and painfully Canada has evolved toward a more just society. UNDRIP makes the suffering of Indigenous persons in Canada more 'worthy' than all the other sufferings by all the other folks, and is in principle a miscarriage of the Charter of Rights and Freedoms. Remembered suffering that leads to entitlement is a precipitous and stony path. That may not be a path we as followers of Christ wish to walk.

While it is true that suffering by anyone in any group should be of concern to Canadians generally, and to Christians in particular, the time to focus on our Indigenous sisters and brothers is long overdue. We need not ignore the suffering of Irish, Scottish, Jewish, Asian, Mennonite or other immigrants, but when we fail to recognize the huge historic injustice which our country has perpetrated against its original inhabitants, or when we minimize the impact which that injustice has had on them, then we run the risk of being responsible for the continuation of that injustice. Christians are called to be agents of reconciliation, and that is what UNDRIP attempts to do - even though it is not an uniquely Christian initiative. But as an effort to move towards reconciliation, we need to affirm this attempt, not decry it.

Thank you, Mr. Warkentin, for your thoughtful response. Your response misses the mark at several important junctures. As a lawyer, you understand that the law must be impartial for that law to serve the citizens of a particular country. UNDRIP will inevitably favor one ethnicity under the law, and therefore by definition be less than impartial in its consequence application. This will lead to unintended consequences that are detrimental to all concerned.

Secondly, I too wish to see a reconciled and flourishing aboriginal community in Canada. I do not believe the Truth and Reconciliation Commission's directives will necessarily accomplish that. Government policy is at best a coarse and blunt instrument. Just as the residential schools were once 'enlightened government policy' and today are decried by the enlightened activists of our day as a travesty.

If these commissions in other jurisdictions are instructive in any way, it is that activists upheld their promise, but in the light of clear-sighted analysis did not deliver. As MC Canada uses its meager resources, why does it do so on a strategy that has shown itself of limited utility in other places? Are we so exceptional that Mennonites will have success?

I do not decry reconciliation; I do decry strategems that have a low probability of success, and a high probability of failure. MC Canada's aboriginal work in the last 40-50 years has little to show for its efforts. This, I fear, is a continuum of that failure.