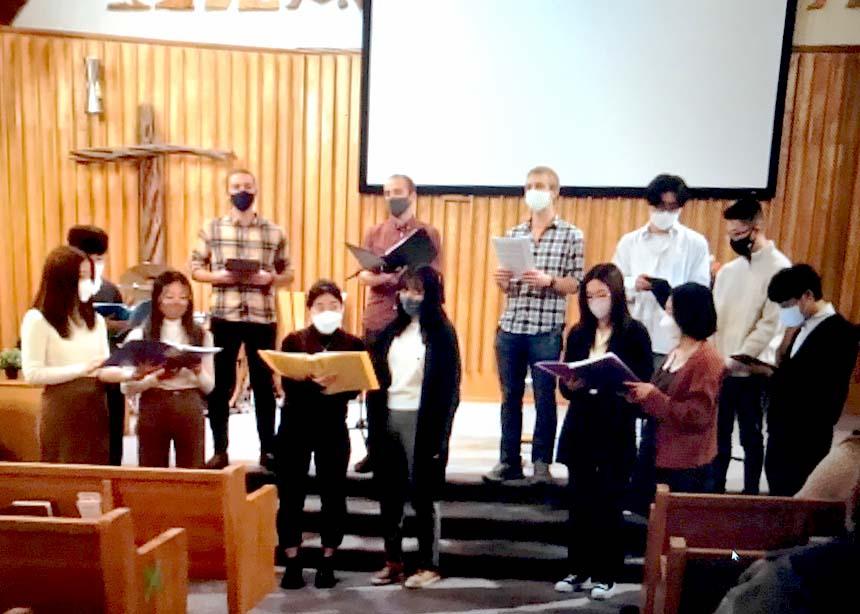 A joint youth/young-adult choir performs at the baptismal service on Oct. 24 for Point Grey Inter-Mennonite Fellowship, which took place at Sherbrooke Mennonite Church in Vancouver. (Screenshot by Amy Rinner Waddell)

A church choir is a rarity these days when worship teams predominate; even more rare is one made up entirely of members under age 30 from two different congregations. But singing in a choir is exactly what young people ranging in age from 14 to their mid-20s, from Vancouver’s Chinatown Peace Church and Point Grey Inter-Mennonite Fellowship, are doing.

Youth groups from both churches have already been taking part in various activities together funded through Mennonite Church B.C.’s Revitalization Fund.

Chan Yang, a member of Point Grey and one of two interns at Chinatown Peace sponsored by the fund, is responsible for coordinating activities such as camping trips in the youth/young-adult age group.

With the encouragement of Tim Kuepfer, who pastors at Chinatown Peace and was thinking of other activities the joint youth groups could do, Yang started a choir last year shortly before the pandemic hit. Plans were put on hold then, but now regular Friday rehearsals have resumed.

“It was a hit,” Yang reports of the musical get-togethers and says some are bringing their friends to rehearsals too.

Although Yang does not claim to be a professional musician, he says, “I like to sing. I grew up in a musical family and play drums and sax. Many of the members do have musical backgrounds.” The group is small enough to sing as an ensemble rather than as a choir with a director.

The singers don’t have access to a music library for their selections, so they take a collaborative approach to choosing their repertoire. Everyone contributes ideas for what they want to sing, listen to the music together, then Yang finds sheet music for those pieces.

“We’ve tried to be inclusive of everything,” he says. “We’ve done ‘Top of the World,’ ‘Because He Lives,’ and ‘Baba Yetu’ [a Swahili version of the Lord’s Prayer], as well as barbershop and jazz.”

The group plans to sing in both congregations as the year progresses, with possibly other locations to come. They felt privileged to sing at a baptismal service for Point Grey on Oct. 24, at which Yang’s sister was baptized. Singing at a joint Christmas Eve service is also planned.

Kuepfer says he hopes this fledgling choir can participate in Chinatown’s thriving arts community and perhaps even host events for a growing number of arts groups in the neighbourhood. As Chinatown Peace plans to create a “living room for Chinatown” with the property it has purchased on Main Street, opportunities for the choir to perform may increase.

“It’s been a real pleasure to meet with the group and talk about what it means to be a church in Vancouver and love our neighbours,” Yang says. “Creating something new altogether [when we sing]—that’s very Anabaptist.”

This article appears in the Nov. 8, 2021 print issue, with the headline “Young people’s choir is ‘a hit.’” Do you have a story idea about Mennonites in B.C.? Send it to Amy Rinner Waddell at bc@canadianmennonite.org. 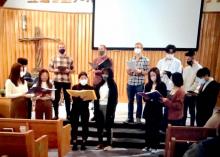 A joint youth/young-adult choir performs at the baptismal service on Oct. 24 for Point Grey Inter-Mennonite Fellowship, which took place at Sherbrooke Mennonite Church in Vancouver. (Screenshot by Amy Rinner Waddell)