The twilight of Mennonite radio

Will new audio formats rise to the task? 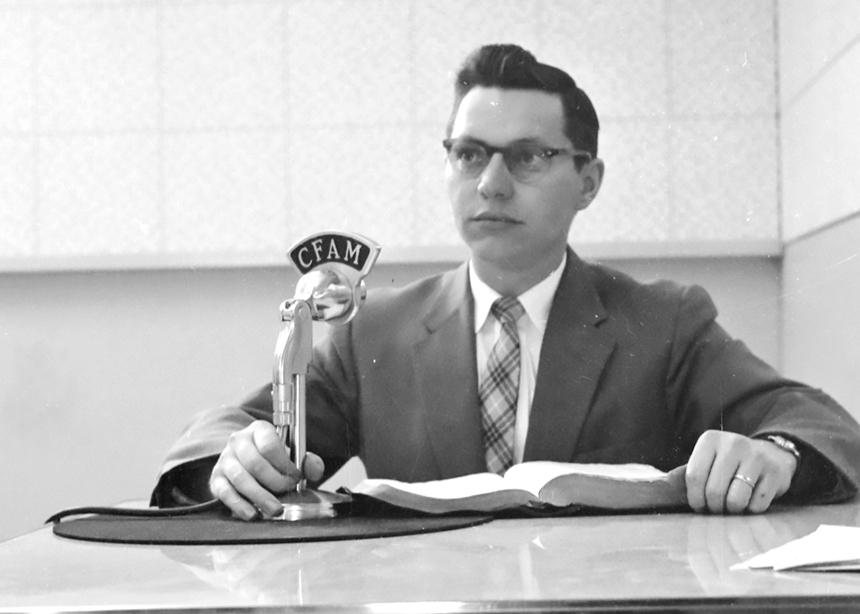 Manitoba’s airwaves are full of Mennonite radio. I began to notice this last year when I started hosting a radio program for Canadian Mennonite University (CMU), where I also work.

Except for Manitoba, none of the regional churches within Mennonite Church Canada currently produce radio programming, according to their executive ministers. In fact, as best they could remember, none of them ever have.

Why is this prairie province different from the rest?

Mennonites in Manitoba first dove into radio in 1956. It should be noted that the Mennonite Brethren church entered radio broadcasting 10 years prior and made significant contributions to the field, but this article will focus on the endeavours of MC Manitoba, then known as the Conference of Mennonites in Manitoba.

In 1955, the Conference formed the Mennonite Radio Mission committee—later renamed Faith and Life Communications—with the desire to evangelize and connect with the community. It began airing two Sunday programs from Winnipeg and Fargo, N.D., in 1956. The shows quickly transferred to the CFAM radio station in Altona, when the Southern Manitoba Broadcasting Company, founded in 1957 with board representatives from 28 separate Mennonite groups, opened the next year.

Frank H. Epp was made radio director for the Conference in 1957, and within the first year he developed three radio programs: Frohe Botschaft (Good News), Abundant Life, and Wort des Lebens (Word of Life). By 1961, Abundant Life was airing from Manitoba to British Columbia, and three years later Frohe Botschaft began broadcasting to Europe and the Americas through a station in Quito, Ecuador.

This radio ministry was so successful because of a few key figures who opened the doors for it.

“I think we had some really wonderful visionary leaders in the past, who helped develop this instrument and this voice, this method of communication,” says Ken Warkentin, MC Manitoba’s executive minister. “They have had tremendous impact on our ministry and in the life of our congregations.”

One of these people is Elmer Hildebrand. The CEO of Golden West Broadcasting (formerly Southern Mennonite Broadcasting) started with the company as an ad writer the year it opened and he became its president in the 1980s. Golden West quickly expanded from its one CFAM station to more than 40 stations across Canada. His push to combine radio and faith is a big reason why Mennonite radio continued to boom in Manitoba throughout the years.

Hundreds of thousands of dollars were invested in a recording studio at 600 Shaftesbury Boulevard in Winnipeg, where the radio operations moved in 1990 and are still located today. In 1994, Abundant Life was estimated to have between 30,000 and 50,000 listeners.

But airtime for these Mennonite programs was not free, like some might think. By the time Darryl Neustaedter Barg became director of Faith and Life Communications in 2003, a $250,000 fund had dried up. He says the Conference also lacked any communication methods other than radio, and it needed to put energy into keeping up with the changing world, which included developing a website. Two programs ran for more than 40 years, but MC Manitoba had to end Wort des Lebens in 2003 and Abundant Life in 2004.

Now, the only remaining original program, Frohe Botschaft, signs off the air this month.

Warkentin says that, while MC Manitoba values the dedicated listeners who continue to love the program, the reality is that listenership and funding for radio ministry have been steadily declining. “If you read the obituaries, you can actually see the people who have traditionally supported Frohe Botschaft,” he says. “We’re now at a place where the donations simply aren’t enough to carry the program anymore.”

Hildebrand says the decades-long passion for radio is waning. “As the only Mennonite radio organization in Canada, it’s ironic that the Mennonite programs are being replaced by others, be they Lutheran, Baptist or other independents,” he says. “We continue to make time available for Mennonite organizations to broadcast, but there seem to be fewer and fewer that want to do that. You ask why, and I don’t know.”

Dorothea Kampen, who has produced Frohe Botschaft since 2001, says she thought a lack of speakers would bring about its end. She has been surprised, and thankful, by the continued willingness of both old and young pastors to prepare German sermons for the program.

But to produce a radio broadcast still takes money, and churches are emptier, with younger generations often choosing to support different causes than their parents or grandparents, Hildebrand says. As the media landscape has changed, and information is instantly available at the click of a button, people have also come to rely less on radio.

Moses Falco, pastor of Sterling Mennonite Fellowship in Winnipeg, says the decrease in Mennonite radio mirrors the way the church as an institution is changing. “Things aren’t happening from the top down anymore,” he says. “It’s on the local congregations now to connect us across this denomination. . . . Once we are passionate from the local level and we start to build from the bottom up, that’s where we see things emerge. . . . We have to find new ways to do these kinds of things, to be a witness and use technology to further the mission of the church.”

But many will lament this shift and the loss of long-standing projects that come with it.

“Listeners have told me or written to me about how important this broadcast is to them,” Kampen says of Frohe Botschaft. “For many listeners, German was their ‘religious language,’ the language in which they first read the Bible and participated in worship services. . . . Since most Mennonite congregations have discontinued their German worship services, Frohe Botschaft has provided an opportunity for listeners to worship God in the language they were first introduced to church.”

Falco recognizes the sadness, but also celebrates the past and gets excited about the new possibilities that can emerge when something ends. He is starting a podcast with two pastors from across Canada, which is currently moving from the dreaming phase into the first stages of production.

Podcasts are popular right now, and Falco says they are proof that audio is still very much alive. In many ways, podcasts are similar to radio, but he says they provide something new to the world. They allow for different types of conversations, ranging widely on topics and quality of production, and are accessible at any time, making them more convenient.

He says the podcasting world is relatively untapped in Anabaptist circles, and the medium will “provide a different space for the Mennonite voice. . . . I want to explore it, see where it might go. How can this medium benefit the future of the church?”

Falco’s emerging podcast will not be associated with any institution but is rather taking a grassroots approach. “We want to create a place where we can have honest, constructive, sometimes critical conversations within our own church,” he says. “This could be a way for us to enrich the church as well, by providing a space for voices that otherwise wouldn’t be heard.” He hopes it can connect the Mennonite church across Canada, but also open the conversation more broadly to anyone who is interested in the Anabaptist faith.

Although the original traditional radio programming by Manitoba’s Mennonites may be taking its last breaths, the desire to keep creating meaningful audio content and have collective experiences is by no means dead.

Warkentin says that MC Manitoba wants to maintain a presence in this new era of broadcasting and has considered whether it should move forward as a podcast, but the regional church hasn’t been able to explore the idea yet due to the novel coronavirus pandemic.

Whatever the future will look like, Warkentin knows how important the regional church’s radio history is. “We have an archive full of sermons representing Anabaptist Mennonite theology that comes from our midst that goes back decades now,” he says, which staff will preserve and hope to make more accessible. “They do represent a tremendous voice of theology in our midst. This is the story that shapes us. It’s had a significant impact, and we don’t want to see that story lost.”

Much of the research for this article draws on Anna Ens’ book In Search of Unity and David Balzer’s essay “Exploring the timbre of Mennonite radio in Manitoba: A case study of the Gospel Light Hour and the Abundant Life.”

1. Where and when do you listen to the radio? Do you have favourite programs? Do you have memories of your family using the radio for worship or for faith guidance? Do you think radio is sustainable in the long term or will it eventually be replaced by other technologies?

3. Nicolien Klassen-Wiebe quotes Moses Falco, who says that we need to find new ways to further the mission of the church but he is confident that audio is still viable. Do you agree? Are podcasts a good way for the church to spread its message or should it concentrate on other methods? How might today’s podcasts be different from yesterday’s radio programs?

4. Where and when do you listen to podcasts? What type of podcast do you find appealing? What are some of the strengths of audio broadcasting? If you were producing a podcast, what topics and themes would you include? 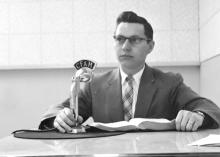 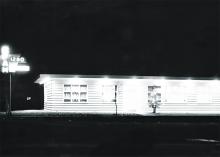 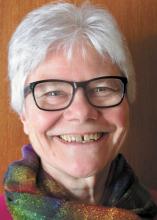 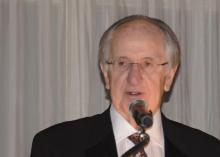 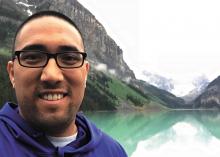 Moses Falco, pastor of Sterling Mennonite Fellowship in Winnipeg, is starting a new podcast with two pastors from across Canada. (Photo courtesy of Moses Falco)

In 1951 Alberta Mennonite Youth Organization started a 15 minute radio broadcast on Sunday mornings called Minutes for the Master on CKXL Calgary. Started with recording programs at the Bible school and later Rosemary Mennonite church.
Since you can access the Mennonite archives in Winnipeg check the conference year books for the early 50's for verification, it didn't last long due to lack of funding support.