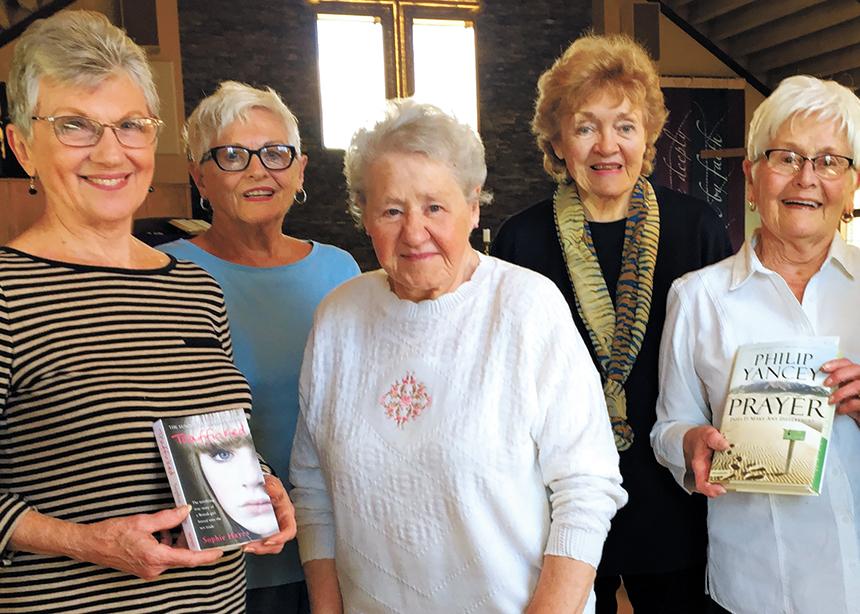 Like at many Mennonite churches, the back of any given pew at Faith Mennonite in Leamington includes a blue hymnal, an offering envelope, and, for the lucky few, a small, colourful, hand-made encouragement card. These one-of-a-kind cards are something new and they point to a wily group of seniors who are helping to bring new energy into the life of the congregation.

What started as a Bequest Fund donation has become a vibrant community ministry, including both young and old, church regulars and newcomers.

For about the past seven months two groups have gathered at Faith on Tuesday afternoons.

Upstairs in the sanctuary is where the seniors meet. Linda Thiessen-Belch, a retired registered nurse, who previously worked in parish nursing and the community health team, and who has women’s ministries training, leads the group.

“I’ve pretty much been given a blank slate,” she says. “It’s a bit of an experiment.”

As such, each Tuesday at Faith provides a different opportunity for the participants to connect with one another and connect with their faith in a new way. Once a month, they participate in a book club, during which they share reflections on the books they are reading with the group. Other weeks include travelogues, social time and guest speakers,  like the Ontario Provincial Police who visited to discuss ways to protect seniors against fraud. Of course, snacks and coffee are always on hand.

When asked what they enjoyed about Tuesday at Faith, members unanimous approve of the activities. Nancy Hogendyk says, “On Tuesdays I get to know each of you better beyond Sunday mornings. There’s a life beyond Sunday morning church.” Another responds that the event is “open to men, but we’re not sure where they’re hiding.”

Along with the in-person aspect of the ministry, Thiessen-Belch is working on providing online offerings such as devotionals, reading material and other resources to provide something beyond the face-to-face interactions of the group.

In the basement, sounds of a wholly different kind of experiment waft up to meet the ears of the women upstairs. There, in the multi-sensory, laughter-filled party-kitchen, is where Sara Garnett, the church youth worker, has her hands full with 17 neighbourhood children learning to cook nutritious food. Like in any professional kitchen, there is chopping and sizzling going on, colourful vegetables being portioned out, aromatic spices being added to interesting dishes, and bodies moving in all directions washing something, passing something, throwing something.

Garnett is Thiessen-Belch’s counterpart. She works with the children each week as the programmer of community connections and faith formation. Along with a group of volunteers, Garnett helps the children hone their cooking skills through “You’re the Chef,” a health-conscious cooking manual for young people put out by the local health unit.

“We’re learning how to cook and it’s really fun,” says McKayla, a smiling fifth grader in the program. “We make things without meat, so it’s easier to make.” Food preparation isn’t the only aspect of cooking being taught, though. “We learned that you should check the labels for information about your food,” says McKayla.

Tuesdays aren’t the only nights for children to connect at Faith.

On Wednesdays, the church runs a general after-school program for students in grades 2 to 6. They play outside, building forts before coming in for snacks, small-groups activities and art time.

Garnett also started a tween book club that has youth bringing their friends to the church to enjoy books.

Thursdays are drama days. The children recently learned parts in a play written by Barry Bergen, husband of Faith’s pastor, Ruth Boehm, that he based on the Book of Esther. The drama was performed publicly at a theatre in Kingsville.

Faith Mennonite’s ability to hire capable staff to engage both young and old was made possible by a Bequest Fund donation from Agatha Neufeld.

“Her desire was that the community and church would be blessed by her bequest,” says Boehm. “The biggest thing was the ability to improvise and experiment.” 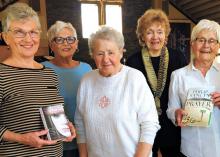 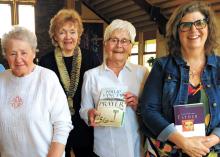 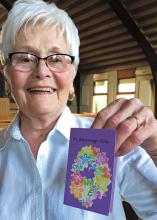 Rita Unrau shows off one of the many ‘encouragement cards’ that have been distributed in Faith Mennonite Church’s pews. 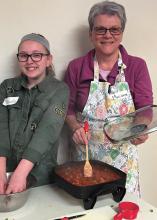 McKayla and her grandma, Marianne Dyck, pose for a shot while making vegetarian chili in Faith Mennonite Church’s kitchen.