Nathan Swartz hitches his wagon to the Hogwarts Express 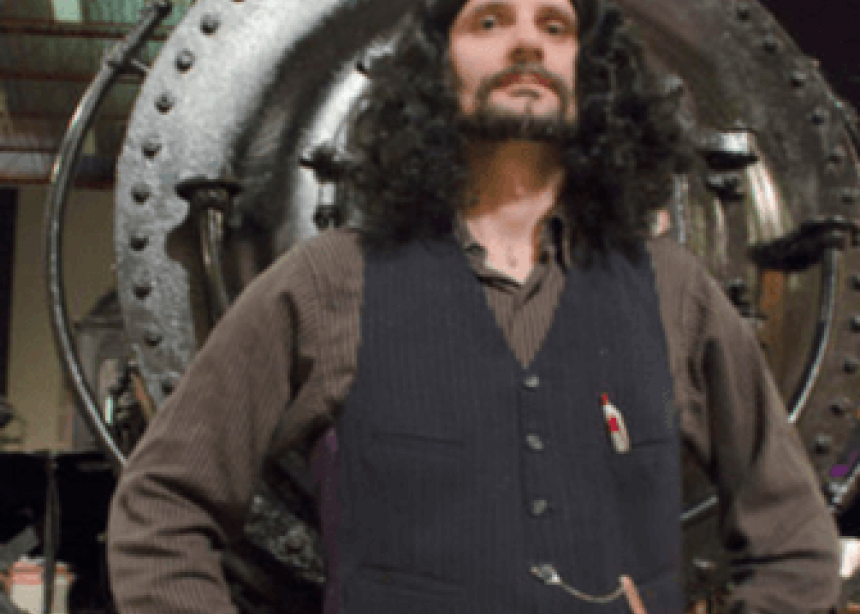 Some might wonder about a Mennonite elder running public events about Hogwarts, a school for witches and wizards. But Nathan Swartz of Kingsfield-Clinton Mennonite Church in southwestern Ontario has thought about this deeply.

People need to “see the distinction between imagination and practice in regard to witchcraft,” he says. J.K. Rowling, the author of the Harry Potter series of books and films, “has created a totally fictional universe—parallel with [C.S.] Lewis’s allegory where love conquers all—just as in our world too for Christians. Self-sacrifice is the most important action for a Christian,” according to Swartz, and this “parallels the real world to Rowling’s world. People having problems with witchcraft are focussing on the Old Testament cultural realities. But Rowling’s witchcraft is totally imaginary.”

Swartz, who held a wildly successful “Harry Potter and the Transfigured Town Festival” in nearby Goderich last fall and has already sold out this fall’s follow-up event, says he believes that “Rowling imagined Hogwarts as a multi-faith school with Christians and Hindus, but with no Wiccans. Harry was baptized and his parents married at the Anglican church in Godric’s Hollow.”

Swartz, who describes himself as a lover of “role-playing board games,” invites discussion on this topic, since he was attracted by the original Anabaptist call for believers to recheck their faith with the Bible. “Anabaptists are constantly checking,” he says. “Second guessing ourselves is absolutely vital, parallel with Jesus and Pharisees, not about following rules blindly, but becoming part of God’s salvation story.”

For Swartz, meta-themes attract people or turn them off. Horror author Stephen King’s worldview turns him off, but Rowling’s work, like much fantasy, has a clear sense of good and evil, with good conquering.

Swartz incorporated his Transfigured Town organization as a “for purpose” company, with its profits from this fall’s festival going to benefit the local Huron Food Action Network and other causes. This is being done, he says, by “harnessing the power of Geek culture to make big impacts in small communities.”

Swartz’s faith journey goes back nearly 20 years. He was resting on a futon that smelled of human sweat, marijuana and cats when he was convinced that there was a God who loved him. He was living at the time with several friends in Toronto “smoking pot and doing other drugs” when two of his housemates claimed conversion experiences. But Swartz couldn’t see any changes in their lives that would support their testimonies.

Deciding that he would get ammunition to argue with them, he took his “little red” Gideon’s New Testament and began to read in Matthew, he says, “looking for every stupid thing” to argue about. Half-way through the gospel he came to the conclusion that he was having the same problems with the church that Jesus was having with the Pharisees. And by the middle of Luke, too tired to continue, he says he knew that he “had zero problems with Jesus.”

So he laid back down and prayed, taking some time and verbiage before he could get to actually challenging God. “If you are real, prove it to me,” he said, adding, “I didn’t see anything, but it was like a beam of light touched my chest.” At that point, he knew that there was a God who loved him. “From that point on, God was real,” he says.

Swartz moved back home to southwestern Ontario, where he married Amanda Henry, sister of one of his convert friends, Daryle, who was also straightening out his life. Together, he and Amanda applied to schools and mission agencies, wanting to share their very new faith. When they weren’t accepted, the leaders at the Salvation Army church they were attending encouraged them to be “missionaries in our own backyard,” he says.

In 2006, they were officers-in-training in Winnipeg, where they met Mennonites and worked with them in a church purposely planted in one of the roughest neighbourhoods. Moves took them to New Liskeard in Northern Ontario as well as to Goderich, and Victoria. B.C. When the Victoria church was re-imagined by the denomination, the Swartzes returned to Clinton and began attending the Kingsfield-Clinton congregation.

A job with the Huron Food Action Network in 2016 meant fundraising, which led to the first Harry Potter event. When his contract with the network ran out, he, Amanda and Daryle decided to try to go it on their own, incorporating as Transfigured Town. Calling himself a “total geek” and a lover of fantasy, this is both a job and fun, he says.