A town that welcomes refugees 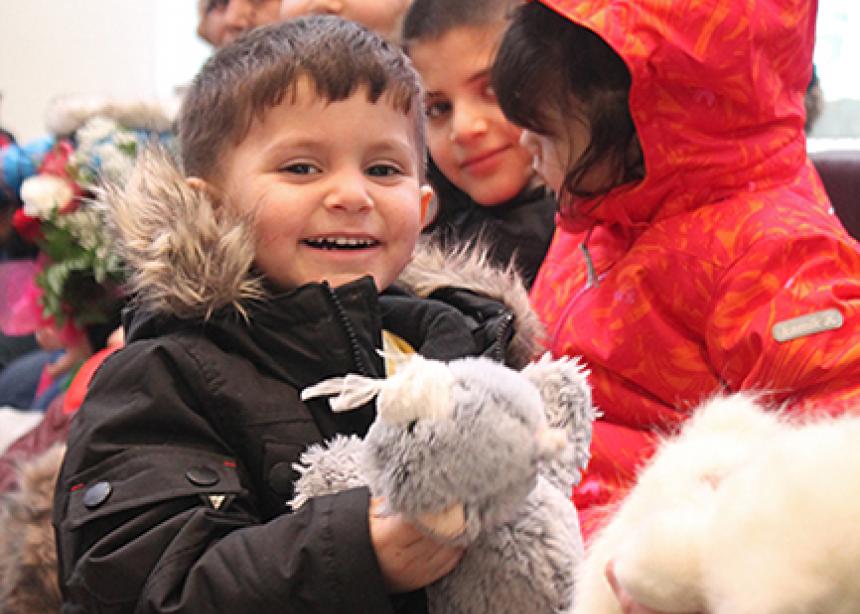 The Manitoba Prairies have a reputation for icy winters, but they should also be known for their warm hearts. This winter, the town of Altona, Man., embraced 45 new refugees from Syria, increasing its population by 1 percent.

It has been a community effort. An Altona-based charity called Build a Village spearheaded the project by sponsoring five families. Four of them have already arrived and a fifth family is expected any day.

Jay Siemens, an Altona photographer raised $20,000 for the refugees by selling a calendar of his photos. And Friesens Corporation offered to print the calendar for free. Recently, CBC Radio featured Altona’s mini refugee boom on its Saturday afternoon show, DNTO.

Volunteers from five Altona churches have taken on the responsibilities of helping the newcomers figure out life in strange, snowy Manitoba: chauffeuring family members around, helping with childcare, getting children enrolled in school and shopping for groceries that meet the Muslim families’ Halal needs.

“I didn’t know what to expect, but I sure didn’t expect to feel such warmth and love and openness and trusting from them,” says Angela Loeppky, who attends Altona Bergthaler Mennonite Church. “I mean, they get into our van and we take them places and they don’t even know where. They allow us to play with their children.”

The family Loeppky’s church adopted arrived on New Year’s Eve. Since they don’t speak English yet, she communicates with them using a combination of hand gestures and a translation app on her iPhone. “You can do two-word sentences at a time before it gets all muddled up,” she says, “We have a great time. It’s unbelievable how we can communicate.”

Ray Loewen, the founder of Build a Village, says people in Altona have responded with open hearts. “I think it’s a combination of a heightened awareness for the plight of refugees, and I totally believe it’s a ‘God thing.’ He’s tapping people on the heart and saying, ‘I think it would be good for you to be involved.’ . . . Jesus calls us to love our neighbour and walk with the stranger. Our faith is a strong reason for us, as Mennonites, to be involved. I think it’s our history as well. Many of us are either the children or grandchildren of refugees.”

Loewen started Build a Village in 2001 after his daughter returned from a trip to Guatemala with Canadian Mennonite University’s School of Discipleship. A local family had hosted her for three weeks with immense generosity. “I thought, if there is a family with almost nothing in Guatemala who is willing to share what they have with our daughter, I should be willing to share a little more of what I have as well,” he says.

Since then, Build a Village has sponsored 25 refugee families to come to Altona from places like Colombia, Iraq, Sudan and Tanzania.

Loeppky says that when her church heard that five Syrian families were coming to Altona, it didn’t take much discussion for it to agree to help. That was just before Christmas, and Loeppky was feeling frustrated by the racism and fear she was seeing in the news and on social media directed towards refugees and newcomers to Canada. The response from her church and her town heartened her. “Gone were racial slurs, hateful phrases and talks of banning a certain faith community to a certain country,” she posted on her blog. “Gone and replaced with God’s grace, love and a can-do attitude.”

Ray Hamm is part of the volunteer committee at Altona Mennonite Church, another congregation helping to host a Syrian family. He says he hears the occasional negative comment in a coffee shop, but mostly people are greeting the newcomers in grocery stores with hearty handshakes. “It feels pretty decent,” he says. “It’s great to be part of that.”

The families are adjusting to the new culture and climate, and are grateful to be here, according to Loewen, who says, “The other day I was standing outside with one of the guys and it was snowing quite heavily and a little on the cold side . . . and he said, ‘I understand we get cold here and we get snow here, but at least we have no guns and we have no bombs.’”

A few days ago Loewen was driving one of the newcomer families to Altona after picking them up at the airport in Winnipeg. One of the children, a four-year-old boy, looked out of the window and said something to his father. “I could hear in his voice there was some anxiety,” says Loewen. “His comment was, “Daddy, look, there’s an airplane. They’re going to drop bombs now.”

Loewen assured the boy he didn’t have to worry about bombs in Canada.

“When we hear about our air force continuing to be involved in bombing in Syria and then you talk to someone who’s lost everything because of a bomb, suddenly it becomes a little more real,” says Loewen, “a little more personal.”