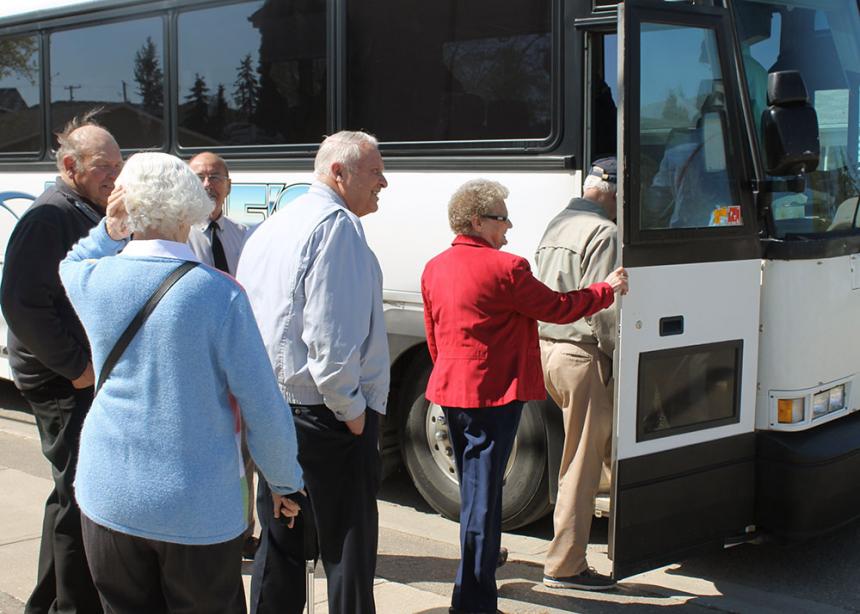 Louise Sawatsky has boarded the bus for Mennonite Church Saskatchewan’s Touring Mission Fest every year the event has been offered. For the 92-year-old from Saskatoon’s First Mennonite Church, the annual tours are worthwhile and enjoyable.

Begun in 2005 under the auspices of MC Saskatchewan’s Ministries Commission, Touring Mission Fest was initially seen as a way for urban congregations to connect with their more-remote rural counterparts.

Eric Olfert was part of the original planning team. He says the tours grew out of the Vibrant Rural Churches Project as “a means by which members of our urban churches could become more personally aware of, and more knowledgeable about, these small and distant churches.” But, he adds, “over time the focus broadened to helping all of us within MC Saskatchewan get to know each other better.”

Prior to 2005, the area church hosted a series of mission fests focussed on overseas missions.

“With the new focus on being missional, on looking at where we are sent in mission, rather than just sending, it seemed important to look at our congregations through a ‘local missions’ lens,” says Olfert. Congregations are asked “to tell the touring visitors how they are church in their community, what is their mission where they are placed,” he explains.

Along with congregations, church ministries have been included in the touring schedule. This year’s Touring Mission Fest, held on May 9, visited Warman and Rosthern Mennonite churches, as well as the Youth Farm Bible Camp, the Mennonite Nursing Home Complex and the Home for the Aged, all three of which are in Rosthern.

In the 10 years since the tours began, participants have visited every MC Saskatchewan congregation and ministry in spite of tours being cancelled in ’07 and ’11.

In the early years, participation was strong and organizers had little difficulty filling two tour buses. In 2005 and ’06, participants chose between two tours because organizers felt that “asking small rural churches to host and feed more than about 50 people would be an unfair burden,” says Olfert. At the outset, participants represented “a mix of ages, including a few families with children,” he says, although from the beginning most participants have been seniors.

Over the years, some experiences have stood out in the minds of participants more than others. Olfert identifies the ’06 tour of the Old Colony Mennonite villages south of Swift Current as “a personal highlight.”

Elmer Regier, leader of this year’s tour, recalled the ’13 visit to Wildwood Mennonite Church in Saskatoon, where participants were treated to a musical performance of a familiar hymn by a group of cellists who regularly rehearse at the church.

In his mind, Olfert says the tours have been “a very worthwhile endeavour, particularly for the smaller and more distant churches. Some small church leaders have expressed deep appreciation for the tour visits, feeling appreciated by the larger church in a very meaningful way.” Those warm feelings are mutual.  “Tour members have also deeply appreciated the perspective change they were offered by the visited churches,” says Olfert.

What does the future hold for the Touring Mission Fest? The Ministries Commission is considering several possibilities. Regier suggests that a return visit to some of the southern churches might be in the works. Olfert says that “visiting our first nations neighbours” might be a possibility, but concedes that “a new model” might be needed in order to “engage a broader age spectrum.” 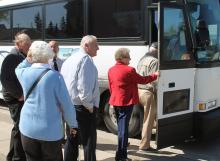