Together in lament, prayer and hope 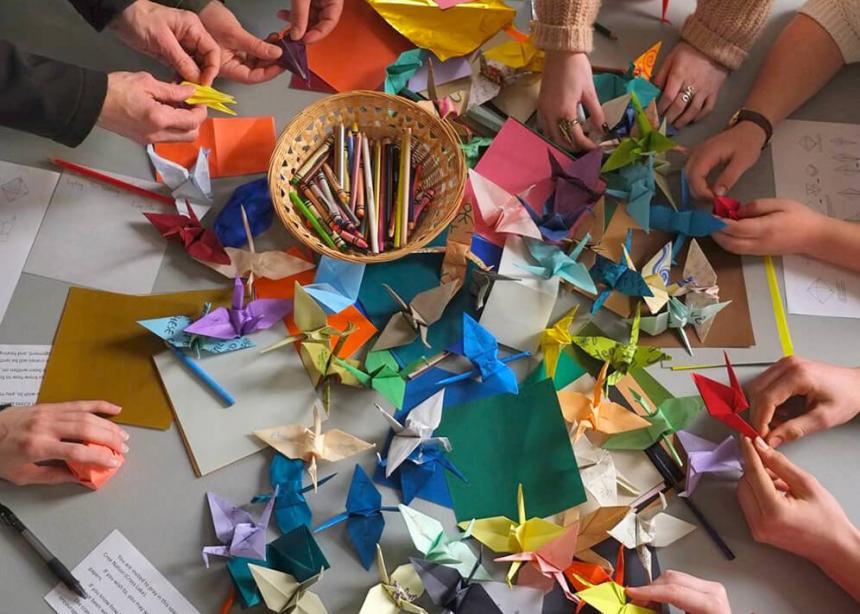 Colourful paper cranes folded neatly over words of prayer. Bowls of floating candles melting together as one. A smudging ceremony rich with prayer that took five times as long as organizers thought it would because so many people took part.

These elements brought symbolic meaning to a March 20, 2016, service of lament and prayer at Home Street Mennonite Church in Winnipeg. The service was held to show solidarity with Pimicikamak Cree Nation, Cross Lake, Man., and mourn the suicide deaths of six members of that first nation community since Dec. 12, 2015.

“There is a long and complex history behind these tragedies,” Fontaine wrote in an invitation to attend the service, “but for now we hope to gather in solidarity and prayer for our sisters and brothers whose sorrows are profound and whose God-beloved lives are inextricably woven with our own.”

Falco, who has had a relationship with the Cross Lake community for a number of years, says he knew many people who wanted to show support for Pimicikamak but weren’t able to visit the community, which is located several hours away from Winnipeg. “When the church in Cross Lake told me that they needed prayer, the service seemed an appropriate response,” he said.

To be faithful to the indigenous community, Falco said it was important to include smudging and drumming, practices that don’t always fit well in churches. Yet people readily participated. Elder Grandma (Gerry) Shingoose explained how to smudge by sweeping sweetgrass smoke over one’s face, describing it as a cleansing act. Falco said her explanation reminded him of Psalm 19:14: “Let the words of my mouth and the meditation of my heart be acceptable to you,” and “Psalm 51:10: “Create in me a clean heart, O God.”

Fast Dueck brought floating candles and two large bowls of water to the service. She said that people lit candles as they entered the sanctuary, and that by the end of the service “they melted together as one in floating bowls of fire.” She found comfort in Shingoose’s perspective of suicide: “Aboriginal teaching tells us that those who commit suicide are taken care of by their ancestors, who meet them when they die.”

Just before the service, Samantha Klassen, a CMU student, showed up with origami paper and pencil crayons to create paper crane prayers in an unexpected and spontaneous gesture of compassion. Klassen, who was engaged in an ongoing project exploring origami as a form of prayer, viewed this as a natural extension of her project. “It was wonderful to see how people from all walks of life participated,” she wrote.

The paper cranes will be delivered to Pimicikamak as a reminder of the prayers surrounding them. 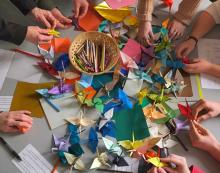