A time to reminisce 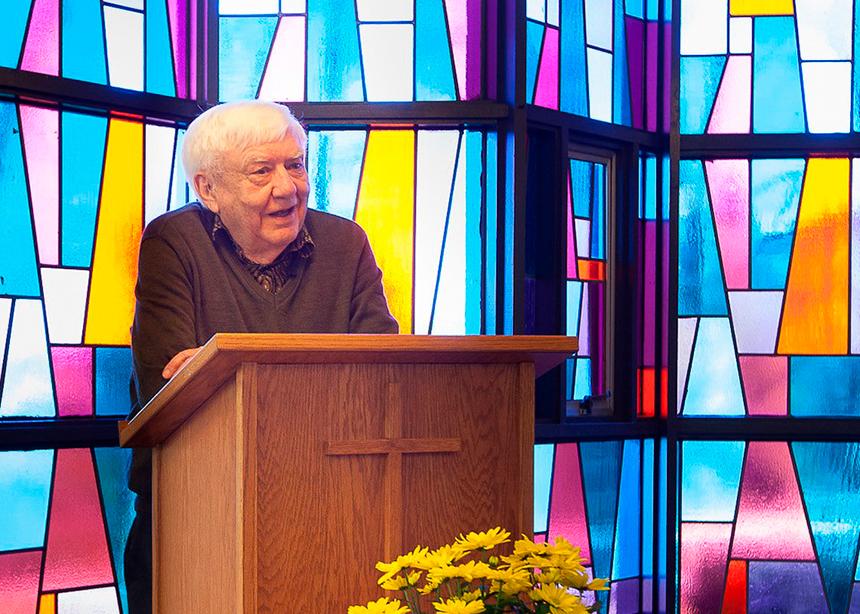 John Friesen, one of the original founders of the Menno Simons Centre, speaks at the farewell celebration for the facility, held on March 14. (Photo by Evan Kreider)

The Pacific Centre for Discipleship, which owns the Menno Simons Centre in Vancouver, has decided to sell the student building and prepare to build a larger student residence on the edge of the University of B.C. campus.

At a “Farewell to Menno” on March 14 for alumni and supporters, Kevin Hiebert, the Centre’s board chair, described the afternoon’s agenda as bittersweet, “a time to reminisce and look forward” after 34 years at Menno.

The Menno Simons Centre served as a student residence since 1986 and, like all property, it aged and required updating. With accommodation for 24 students, the building was not large enough to sustain a major renovation. The Centre has purchased the Pentecostal and Lutheran properties, and is in the process of getting zoning and architectural approval for a facility that it is hoped will accommodate up to 70 residents.

It’s a major project, described by one board member as “casting ourselves into the wilderness.”

The current Centre has provided a pathway, seeking to help students integrate their academic studies, faith and discipleship through Christian community.

Evan and Janice Krieder, among the original founders, paid tribute and gave prayers of thanks for the 12 couples who served as residence coordinators over the 34 years. “They made the place work,” said Evan.

Bethany Parsons, the present residence coordinator, said the Centre thrived on food, diversity and support. A student survey indicated the value of weekly community meals. “Eating together is most important,” she said, “including the collaboration in meal preparation.”

A current resident commented on “moments of joy, laughter, sadness and deep reflection.” The diversity came from students from various countries, as well as denominations. “I came in lonely and found a place to share experiences. . . . I love the late-night debates.” Support is almost built in; the rooms are tiny, being previously occupied by nuns, so more time is spent in the common space. “It’s okay to be interrupted.”

Making community happen is up to each one, and student retreats helped facilitate togetherness. Students who are new to Vancouver have said the Menno Simons Centre provides support and a sense of home.

John Friesen, another of the original founders, described the challenge in 1986 when realtor Oscar Klassen advised them that the Sisters of Charity of Halifax were dwindling in numbers and that the Catholic diocese wanted to sell the convent associated with the Our Lady of Perpetual Help school nearby. The price of $600,000 was problematic and the Mennonite group had no funds. Borrowing at 13.5 percent interest was scary.

The small group approached the B.C. Mennonite Brethren and the then General Conference Mennonites for financial assistance. Both conferences refused. People from the founding group put up their own property as collateral to facilitate the financing, and the convent was purchased.

The nuns were pleased that it went to an education-oriented group. Knowing that the Centre would continue to serve educational needs helped swing the decision in its favour. Significant support also came from Point Grey Inter-Mennonite Fellowship, which has met in the Centre’s chapel since its inception.

Prayers of thanks were offered for forward-looking and risk-taking founders who sacrificed for the establishment of the Centre.

A new facility is planned in a new setting with the same spirit of wanting to offer students an opportunity to experience being in community with other Christians. 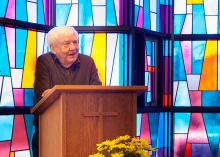 John Friesen, one of the original founders of the Menno Simons Centre, speaks at the farewell celebration for the facility, held on March 14. (Photo by Evan Kreider) 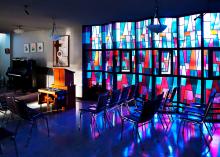 The chapel at the Menno Simons Centre in Vancouver has served as a meeting place for Point Grey Inter-Mennonite Fellowship since 1986. (Photo by Evan Kreider)