Three youths reflect on their experience at Amplify! 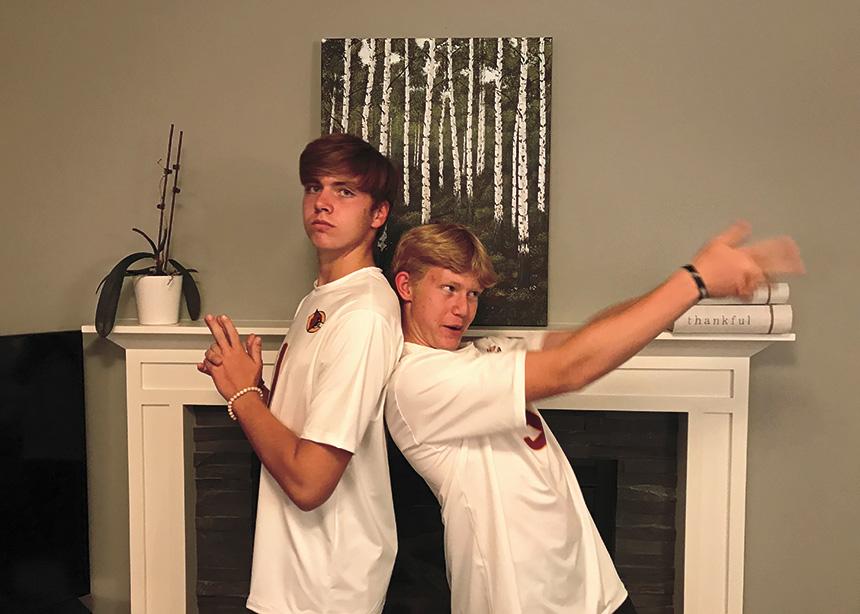 A few weeks ago, I had the opportunity to attend Amplify! at Camp Valaqua. This was an amazing experience for me, and it left me wanting more.

The first thing that made this week so enjoyable was the participants. Meeting all different kinds of people from different provinces was a refreshing experience! It was amazing finding out all the quirky little differences that the kids from each province had. This was especially evident, as well as fun, during worship and campfire times, as people from each province, and therefore each different camp, had slightly different versions of each song. It was also interesting finding out how each of the camps across the provinces ran their individual camps, and how they were different from ours.

I spent a lot of time playing ultimate frisbee, basketball, and meeting new people. Ultimate Frisbee was a brand-new game that I learned during Amplify! and it was a blast! Our new friends from Ontario taught us how to play on the first day. It became a regular activity and my personal favourite, despite my ineptitude.

We also had a great time playing basketball with our new friends one province over. They helped us have a huge amount of fun, and we had a great time learning about our very flat neighbouring province.

My favourite part of Amplify! was meeting lots of new people, both campers and group leaders. We had phenomenal youth leaders attend the camp and it made it a whole lot of fun: from bribing groups in Monopoly, to the way the whole camp would start chants for various leaders throughout the week, specifically Jeff and Randy.

Becoming friends with people from all across the country was an amazing experience, and I can only hope that I can stay in touch with them for a long time.

If I had to sum up my time at Amplify!, I would say it was amazing. It was good to meet so many new people and learn about all the other camps and congregations around Canada.

One of my favourite parts were the worship sessions. It was really cool to learn all the songs from the other camps. It was also really impactful to listen to Christy Anderson speak about her life experiences and about the Mennonite and Christian faith from a First Nations’ perspective. She shared stories about how the residential schools have had a negative impact on her family and how those experiences will have an impact for many generations to come.

Another thing that I liked were the people, whether it be the Ontarians destroying us in Ultimate Frisbee or the Saskatchewanians being amazed by how many trees were around us.

Another neat thing was how we could see how other camps were different from ours but still had the same core values. We got to learn a bunch of songs that were from camps across the country. Some of the songs were familiar to me, but some of them I learned for the first time.

On the last night, we were told that there was a late-night surprise for us before we played Mission Impossible. The surprise was fireworks and, boy, did they not disappoint! They were amazing. It was a once-in-a-lifetime opportunity to see them light up the sky in a dazzling display.

Another activity that we did was go on a hike. While we were on the bus ride to the hike in the Kananaskis, it was amazing to see a bunch of people who had never seen mountains (or at least the Rockies) see the sheer size of the Rockies. This really made me realize how fortunate I am to live right beside the most beautiful mountains in the world.

Overall, Amplify! has to be my favourite week at camp ever, and one of the best weeks of my life, I am so grateful to be able to be a part of it.

My experience at Amplify! at Camp Valaqua was nothing like I’d even felt before. This was my first time at any type of summer camp, and I don’t think anything could have been better. At the beginning, I was scared, but it felt so safe, and I’d never felt more connected to the church in my life.

I made a friend almost immediately. We both had never been to an overnight camp before, so we decided early on to stick together, and we quickly became friends. We are still in contact, even with the distance.

Being there opened my eyes to the future of our church. I had absolutely no idea how many youth there were in Mennonite Church Canada; it felt like I was actually a part of something bigger. I’d never felt that before, never. I got to talk to people and have good, fun conversations with many people. It was like a home away from home.

Seeing everyone at first was intimidating, but it took maybe an hour to get comfortable around them. The experience of just being at camp felt so perfect:  the singing, the games, the people. I couldn’t have asked for more.

I felt that I could be myself with everyone, even though I was one of the younger campers. I could talk to anyone. At first, I only talked to my friend from before, but we got split up when they went on the hike, and then at Calaway Park. So I had to talk to other people, and it went much better than my anxious mind had thought. I found a group to stick with, and we joked around and had a lot of fun. I even fell asleep on the bus.

Every night I would journal about the message presented to us. It meant so much to me—the way Christy Anderson spoke held such meaning, and I wanted to document the things that spoke to me. It even got me back into doing daily devotions at home. Her words really got to me. I want to learn more about the balance between the peacemaker and warrior spirit. It made me think. I wanted to listen, which doesn’t happen very often.

The worship was astonishing. Getting to sing camp songs with everyone was such a magical experience because everyone joined in, and doing the actions was even expected. People were jumping around and having fun. In some other places, people think they’re “too cool” to do all that, but the energy at Amplify! was so comfortable that everyone did it anyway.

I wouldn’t change anything if I were to do it over. Camp was the best experience I’d ever had with the church, and I say this wholeheartedly. I felt accepted and loved. It felt like God was showing me all this, showing me the youth of our community and the possibilities of the church.

Related story:
‘Under the tall, tall trees of Camp Valaqua’ 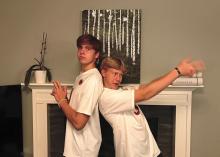 Dinner in the dining hall. (Photo by Joani Neufeldt) 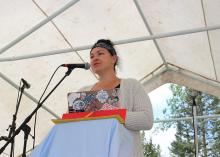 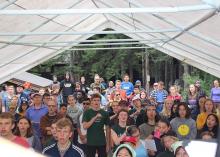