Thoughts on Peru and the TRC

Evangelization—what made us think we had the right? 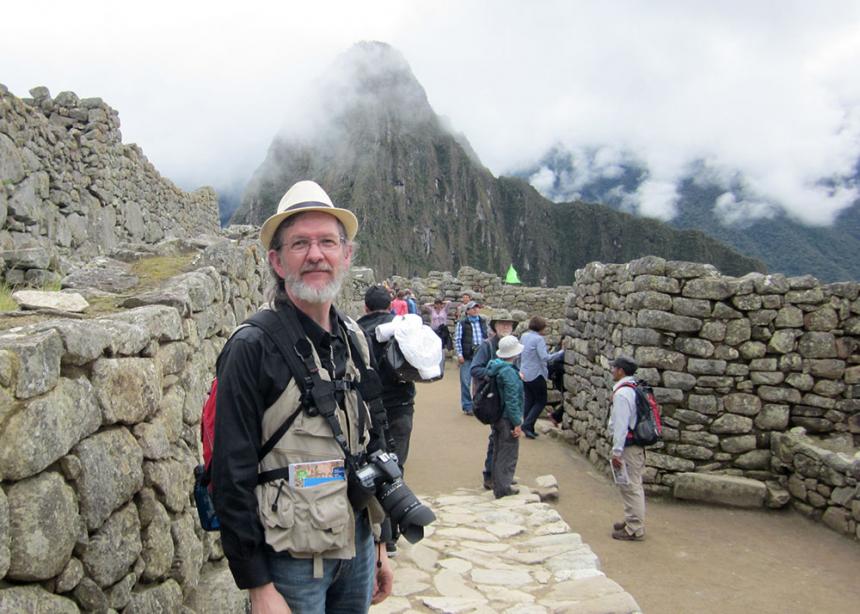 <p>Dave Rogalsky explores the ruins of Machu Picchu, the mountaintop retreat and administrative centre of the ancient Incan empire. (Photo by Annemarie Rogalsky)</p>

It was a huge painting. At least 3 x 3 metres. It was part of a show in the Dominican church of San Domingo, built over and incorporating Qurikancha, a central Inca complex in Cuzco, Peru. My congregation, Wilmot Mennonite Church near Baden Ont., had given me the privilege of travelling to Peru for two weeks in early May this year. Taking time to study history, culture, archaeology and missions, as well as visiting family working in a mission hospital high in the Andes at Curahuasi, made this sabbatical rather than purely holiday.

Qurikancha was the centre of sun god worship in the Inca capital and was located in the bowl of mountains where the city of Cuzco is. The altar to the rising sun was in the far western corner of the complex, the first place the rising sun’s rays would strike the complex as the sun rose over the mountains. Pure gold idols and altar ware, as well as a solid gold cap on the wall that surrounded the complex gave back bright light to show the joy of the people at the sun’s daily return. Here in the mountains it only rains in the summer, and then mostly at night. Daytime highs of 19 C and night time lows of 4 C are the year-round climate. Last year’s summer had had rain; the coming winter was dry already. The leaves were falling when we were there.

We had come to Qurikancha to see the ruins in, around and under the church. The Inca temple had been partially destroyed and incorporated into the Dominican church back in the 1500s.  After an earthquake in the 1950s stones had been retrieved from all over Cuzco and had been re-incorporated into the Inca buildings, now inside the church. We had gone to see the ruins but had lucked into three separate art shows, two modern Peruvian shows and this one, made up of 17th and 18th century paintings by members of the Cuzco school of painters. They learned from visiting European artists, painted anonymously, and were mostly of mixed blood, Spanish and native.

The painting in question was entitled, “The Evangelization of the Inca.” (Unfortunately this show did not allow for photographs of any kind.) In the centre of the painting, carried on the shoulders of his servants, was the Inca Atahualpa. (Inca is the title of the emperor as well as of the empire.)

The Incas had assembled a significant empire from southern Panama deep into Chile, and east into the Amazon jungle. Along the western shore of mezzo and South America was the sixth cradle of civilization, along with the Greco-Roman, Egyptian, Mesopotamian, Indian, and Chinese/Japanese.

In this painting the painter, probably a descendant of the Incas, had placed the Inca emperor Atahualpa in the key place as if to stress the importance of his empire and their civilization. To the left of the Inca, holding a crucifix at him, were seven Dominican friars who had come to Christianize the Incas. To the right were Spanish conquistador Francisco Pizarro and his troops, on horseback with swords and lances.

Atahualpa had not come in force to attack but rather to meet with the Europeans. Pizarro had in his possession orders from the Spanish crown to conquer the land and assume its rule as viceroy. When Atahualpa did not immediately convert to Christianity, Pizarro had him arrested. Atahualpa, a man of honour, offered to have himself ransomed with a huge amount of gold and silver. When the ransom was gathered, Pizarro had him publicly strangled, in direct negation of his own given word.

It was 1532. It took nearly five hundred years before another “Inca” would assume the role of leader of the Peruvian people. Even though the current population is 79 percent Native American, 20 percent European, and 1 percent sub-Saharan African (the descendants of slaves), it was not until 2011 that a Quechua politician, Ollanta Humala, was elected as president of the country.

The Quechua are the descendants of the Inca. No wonder there have been many uprisings all over the country that continue to the present. The area around Abancay and Curahuasi, where we stayed for nearly a week, is the heartland of the Shining Path Maoist guerrillas, who fought a war against the Peruvian government for over ten years, from 1980 to 1992.

Upon my return to Canada, I told this story to my congregation and a member asked, “What did we think gave us the right to do those kinds of things to these people?”

As we listen to the final report of the Truth and Reconciliation Commission in early June 2015 and hear the words cultural genocide, we can keep on asking those questions. Of course, as Mennonites we would like to exclude ourselves from those issues. As Pizarro was carrying out his genocide in Peru, our Anabaptist ancestors were facing their own persecutions in Europe. But we too have thought that, because we have the true faith, we can negate or attempt to eradicate others’ faiths and cultures.

What was lost when we failed to listen to the words and stories of those with whom we came in contact—people from other cultures who practiced other faiths? What do we still miss when we don’t listen and instead form answers while the other person is still speaking? 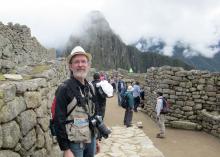 Dave Rogalsky explores the ruins of Machu Picchu, the mountaintop retreat and administrative centre of the ancient Incan empire. (Photo by Annemarie Rogalsky)

The ruins of Machu Picchu, the mountaintop retreat and administrative centre of the Incan Empire. (Photo by Dave Rogalsky)

Atahualpa Inca with the condor, puma, and snake—the guardians of the sky, earth and underworld in the cosmology and religion of the Incas. By the time the European explorers reached Latin America, the Incan civilization had assembled a significant empire from southern Panama deep into Chile. (Photo by Dave Rogalsky)

The city of Cuzco in its valley in the Peruvian Andes. (Photo by Dave Rogalsky)