‘There is something beautiful’ about those people 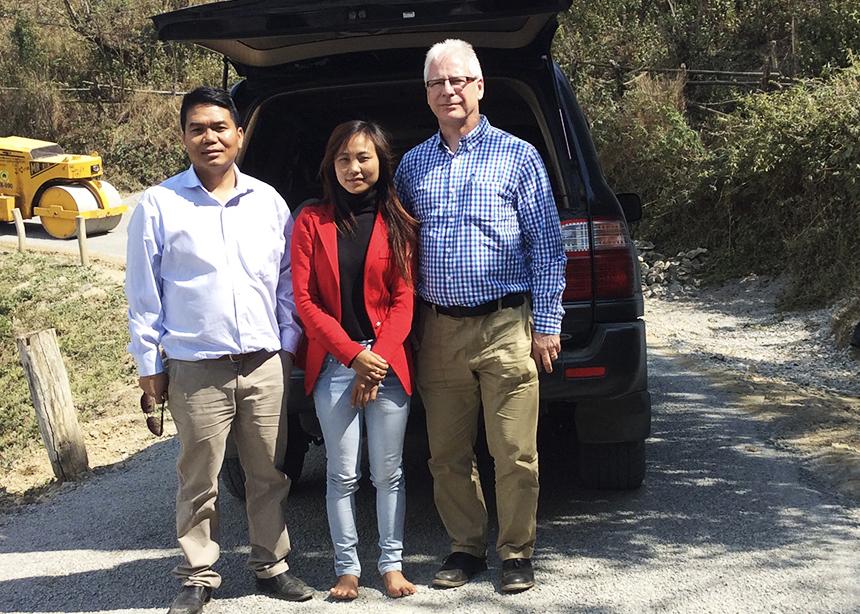 Jehu Lian Ching of Myanmar Missions International, left, and David Martin, right, are pictured with a musician from the convention they attended in Myanmar in 2015. (Photo courtesy of MC Eastern Canada)

“The people,” he said. “There is something beautiful . . . about all those people . . . being the presence of Christ in their communities.”

This was David Martin’s first response when he was asked about highlights from his 15 years as executive minister of Mennonite Church Eastern Canada, a job he will retire from at the end of July. Prior to that, he pastored for 25 years at three Ontario congregations: Waterloo-Kitchener United Mennonite in Waterloo as youth pastor, then Hagerman Mennonite in Markham and Stirling Avenue in Kitchener.

Especially significant for him was the “intercultural development” of the regional church. He noted that the “cultural diversity has increased” to the point that there are now 17 languages of worship. He sees this growth as an opportunity for “mutual gifting.”

A surprise for him was how international ministry, which “was always the national church’s work” became part of MC Eastern Canada’s focus. When congregations “want to be in mission back in their countries of origin . . . it becomes part of our mission,” he said.

Martin experienced this first-hand when he travelled to Myanmar twice with a delegation to explore what it means to share Anabaptist theology, faith and practices in that context. He said that collaborating in international mission “makes the Mennonite World Conference community of faith that much more real for us.”

From the beginning, Martin grounded his work at MC Eastern Canada in spiritual practices. He said it was important to “maintain strong, daily, spiritual and physical disciplines.” He met regularly with a small prayer-support group and invited others to pray for the work of the regional church. Just last year, a woman in her 90s approached him to say, “I am still praying for you every day.” He also called on a group of spiritual directors for prayer during annual church gatherings and difficult situations. He said, “That broad kind of spiritual support . . . has just been invaluable. . . . I have felt its impact.”

There is a shift toward connecting and building relationships in our neighbourhoods, he said. “We’ve got a light.” How do churches go about “sharing God’s peace with our world . . . in ways that have integrity?”

In reflecting on challenges, he named ministerial misconduct as an issue the “church simply needs to be honest about.” He acknowledged that “the church is a sinful, broken, community of faith seeking God’s healing and redemption.” And when leaders fail, he said, “the church needs to address that.” There are “systemic underlying attitudes that reach into our pews. . . . This is a society-wide issue,” he added.

Martin knows there is more work to be done, but he said he is encouraged that “we are finding and building resources to address it” in Mennonite circles and beyond. He named actions like commissioning Theatre of the Beat to develop and perform the drama #ChurchToo across the country, and developing sexual-harassment policies and preventative training sessions for leaders, as positive steps.

Another challenge he faced was concern over an increase in “theological diversity.” He said, “We’re not as homogenous as we used to be, and that’s a good thing.” However, a variety of factors have “sharpened” differences. He said he was sad to see some congregations leave the regional church as a result.

“My concern for the church going forward is that we handle that theological diversity well,” he said. “We need to be able to have frank, trusting conversations . . . because both ends of the spectrum have something to say.” He said he wished people could say, “I don’t agree with you, but I do have a relationship with you that is stronger and bigger because Christ draws us into relationship,” so that those looking at the church could say, “They don’t agree with each other but they still love each other.” That would be “an incredible and immense witness to our secular society that is fracturing and polarizing.”

When reflecting on his hopes and dreams for the church, Martin asked, “How do we build relationships interculturally that move beyond sharing food to actually sharing relationships? . . . How do we integrate everybody? All of those different cultural groups bring a sense of wisdom, power and experience that we all need to learn from.” Here, too, he said, “The church has an incredible potential to witness to society.”

On top of the list of things he would like to do in retirement is spend more time with his wife Doris and their family, admitting that at points they sacrificed during his time in church leadership. He also anticipates extra time for curling and going to the gym.

While looking forward to a slower pace, Martin said he is “exploring possibilities with Mennonite World Conference,” saying he still wants “to be engaged in the life of the church . . . in some way.”

Related story:
‘He kept looking ahead’ 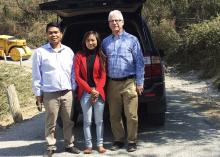 Jehu Lian Ching of Myanmar Missions International, left, and David Martin, right, are pictured with a musician from the convention they attended in Myanmar in 2015. (Photo courtesy of MC Eastern Canada)