Theatre of the Beat returns to Saskatchewan 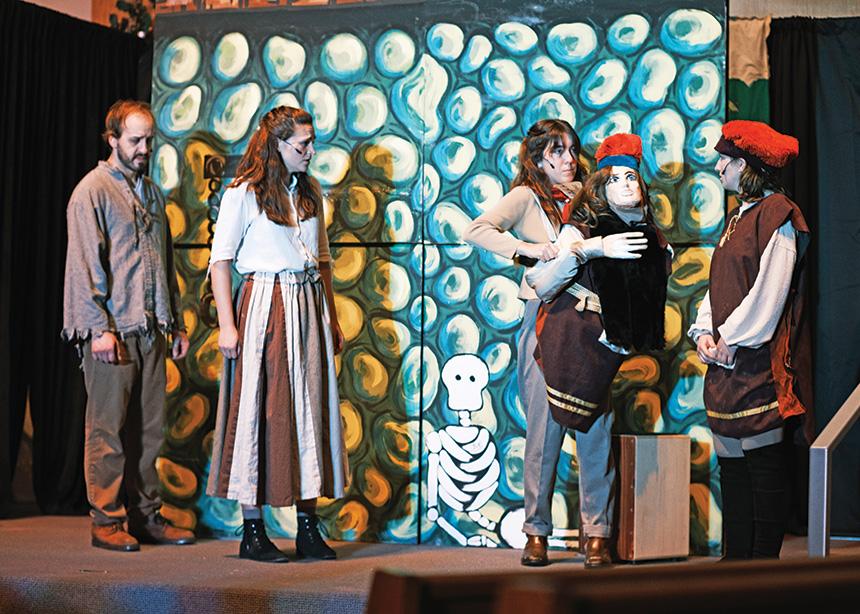 The warring rulers, Hocken Grabber and Loopen Snatchem, seek to make amends as Selah and her father look on. (Photo by Emily Summach)

After a “too long” hiatus due to the pandemic, Theatre of the Beat is once again on tour. The theatre company, based out of Toronto, delighted audiences in Saskatchewan with its production of Selah’s Song recently.

According to its website, “Theatre of the Beat is a Canadian touring theatre company working to catalyze conversations on social justice and its intersection with the beliefs of the communities in which we find ourselves.”

Selah’s Song tells the story of a young woman whose country is living in the midst of a decades-long war and all the pain and societal consequences that go along with that. What can one individual do in the face of such large-scale issues? This is the question that the young protagonist faces, and audiences are drawn along on the journey with her. The play was performed in both Osler and Rosthern, Sask., as part of a cross-Canada tour.

The production features an ensemble cast of four actors, an array of charming puppets and music written by Brian Moyer Suderman, a Mennonite singer-songwriter whose music can be found in the new Voices Together hymnal.

The play was impactful for theatregoers of all ages.

“Selah’s Song was great,” said Heather Peters of Saskatoon. “It took a complex subject, generational civil war, and made it accessible for all viewers. My seven-year-old, Rehema, was drawn into the story when they asked us to sing along with Selah and the people. I loved how the play demonstrated that small actions matter, that they can grow, and that anyone can bring about positive change in the face of injustice. It also prompted Rehema and I to have conversations about risk, bravery and civil disobedience. The next morning, she woke up singing, “Won’t you sing, sing, sing with me. Sing a song of peace,” from one of the songs in the play.

It is this kind of impact that drew actor Malia Rogers, who played the title role of Selah, to audition for the play.

“Being cast in this show is a dream,” she said. “I love being a part of theatre that inspires conversations between different perspectives. Theatre can really help to inspire change. I also love that going on tour, often visiting rural communities, welcomes people who maybe aren’t the first people who would choose to go to a theatre production. Making theatre happen outside of these ‘big city theatre bubbles’ is something that I’m really passionate about.”

“I had seen Theatre of the Beat perform a different play at Wildwood Mennonite Church [in Saskatoon] before,” she said. “The effectiveness of live drama is really something special. We enter into the story in a different way, versus watching something on a screen or listening to a sermon. People were excited to be able to go to a theatre performance again. That’s really a privilege we didn’t have during the pandemic. She said that 85 people attended the performance at Osler Mennonite Church.

Friesen and other members of the planning group also saw the event as an outreach opportunity.

“We put an ad in the local paper for the play,” she said. “I’m always interested in opportunities to draw people into church in non-Sunday morning worship-related ways. Theatre of the Beat did a great job of taking really adult themes like conflict and systemic injustice and using what we often think of as ‘children’s tools’ to tell the story—like music and puppets. So it’s effective for both kids and adults. Selah’s Song was certainly timely, considering global conflicts, like the war in Ukraine. As Anabaptists, it’s a good way and a good time to be reminded of our peace values and principles.”

This article appears in the Nov. 14, 2022 print issue, with the headline “Singing the song of peace.” Do you have a story idea about Mennonites in Saskatchewan? Sent it to Emily Summach at sk@canadianmennonite.org. 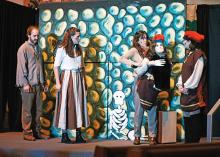 The warring rulers, Hocken Grabber and Loopen Snatchem, seek to make amends as Selah and her father look on. (Photo by Emily Summach) 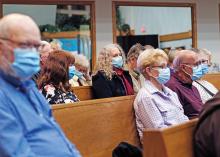 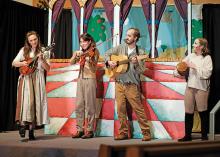 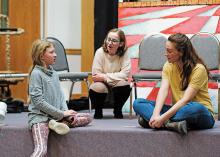 Actors Christina Leonard and Malia Rogers take time to converse with a young fan after the show. (Photo by Emily Summach)