Saskatchewan pastor invites others to join him for monthly outdoor worship 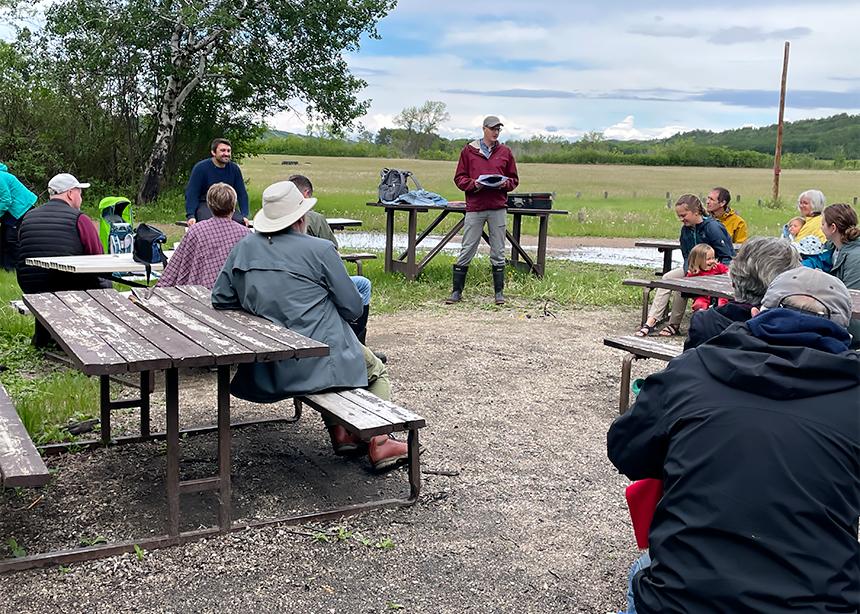 Curtis Wiens, standing centre, envisions a community gathering at Shekinah year round, to worship outdoors and delight in the beauty of God’s creation. (Photo by Donna Schulz)

Why does God rest after creating the world? According to Curtis Wiens, it isn’t because God is tired and needs a break.

Wiens, who is pastor of Aberdeen Mennonite Church, posed the question during an outdoor worship service at Shekinah Retreat Centre on June 6. About 30 adults and children representing at least seven Mennonite Church Saskatchewan congregations met that afternoon for what Wiens simply called “forest church.”

Citing the book, Making Peace with the Land: God’s Call to Reconcile with Creation, by Fred Bahnson and Norman Wirzba, Wiens suggested that God rests after creating the world in order to delight in creation. By resting, God sets an example for people to also take delight in creation.

“Delight in Sabbath marks the moment when we find whatever is in our presence so lovely and so good that there is no other place we want to be,” write Bahnson and Wirzba. “All we want to do is soak it up, be fully present to it, and cherish the goodness of the world God has made.”

Wiens shared his appreciation for this understanding of Sabbath rest as he proposed to the group his idea of gathering at Shekinah one Sunday each month, year round, to worship God outdoors and enjoy the beauty of God’s creation.

“I wanted to gather a community of all ages who wanted an opportunity to worship outside,” said Wiens. The Japanese practice of forest bathing has shown that being in nature has physical, spiritual and mental-health benefits, he said, noting, “It’s easier for some people to connect with God outside rather than in a conventional church building.”

Wiens said he hopes that a regular worship gathering held at Shekinah, but not hosted by Shekinah, would be a way of supporting the MC Saskatchewan camp and its staff.

Camp counsellors, who have only a day-and-a-half off each weekend, aren’t likely to want to spend two hours of that going to church, he said, adding, “Maybe this would be an opportunity for staff to have a truly worshipful experience that doesn’t have to be a burden on them.”

Wiens would also like to see the forest church be a way for the Shekinah camp community to connect throughout the year. This would include summer staff as well as campers, who may come for a week in the summer and then feel disappointed that they have to wait a whole year to connect with God in the same way again.

“This is an ideal worship setting,” he said of the Shekinah property. “I imagine this as a place where we could reach out to others who either have church connections and are looking for more of this type of thing, or some people who maybe don’t have formalized church connections and want a community setting to connect with God in.”

Wiens said that, although it is possible to have a worshipful experience by oneself in nature, one is less likely to feel motivated to get out there. Meeting with a community of worshippers can be both motivating and encouraging.

“Maybe you’ll even meet someone who shares the same desires as you to connect with God in a way that maybe church isn’t doing it for you, not completely,” he said, adding that, even though he is a pastor, he still feels this desire.

The church, said Wiens, is in a time of transition and change. He thinks that the forest church may be a more organic way of inviting people to be part of the church rather than expecting them to buy into a church structure that isn’t part of their background and history.

“There’s a lot of baggage that comes along with the church, even just knowing the language and how to behave,” said Wiens, “whereas [at forest church] you can run off and jump in a puddle or wander away—there’s no decorum.”

If the forest church continues to meet beyond the summer months, Wiens said he expects that it will grow and shrink with the seasons.

He said that, although the idea and initiative were his, he wants the group to set the vision for the community. Based on feedback from participants during and immediately after the time of worship, Wiens said he is hopeful that others will want to bring their own creativity to the group. 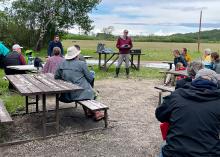 Curtis Wiens, standing centre, envisions a community gathering at Shekinah year round, to worship outdoors and delight in the beauty of God’s creation. (Photo by Donna Schulz)

Participants sing together at the beginning of their worship time during forest church, held at Shekinah Retreat Centre recently. (Photo by Donna Schulz)