Takin’ care of his musical business

Production scheduler by day, multi-instrumentalist/singer by night
(and on Sunday) 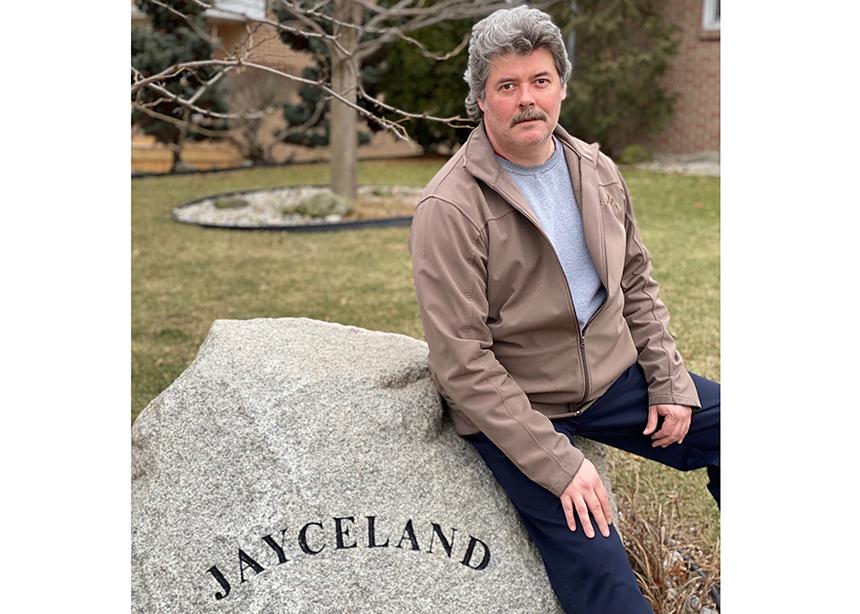 In the front yard of an average looking home lies a large rock with a landscaped garden bed around it. The rock reads “JAYCELAND’ and bears a lightning bolt with the capital letters T, C and B around it. This is the home of the Hildebrand family, where Jay and Monica and their son Mitchel are a typical family who go about their daily routines of work and leisure.

But for Jay, “Takin’ Care of Business” (the title of a 1973 Bachman-Turner Overdrive song) doesn’t just happen between 9 to 5.

When he isn’t working his day job as a production scheduler at Plasman, a global auto parts company, he’s plucking, picking, pounding and playing music. It’s his way of decompressing after a workday.

But Jay, who also goes by the stage name Jay Richards, thinks music is also a gift worth sharing, something he has been doing since 1991, when he formed Chapter 11 with two friends. The teenaged trio released a cassette and Jay can be seen wearing an original Dark Side of the Moon T-shirt in the black and white cover photo. He has been making music ever since.

Last October, nearly 30 years after his time with Chapter 11, he released Black Hole Vertigo, a CD of original songs. All of the music was written and arranged by Jay, a multi-instrumentalist. “It took four years to put together,” he says. “I do the bulk of the work myself and I’m a perfectionist,” he adds, hinting at why it took so long to complete the project. Monica and Mitchell were also involved, providing photos for the CD art.

Jay likes to try different things with his music and “let the chips fall where they may.” On his song “Justified”, he writes about a police officer shooting an unarmed man and the subsequent aftermath. It’s a song that people regularly want to talk to Jay about. Although he admits the story is fictional, he also insists it’s true. “Pick up any newspaper and it’s such a common story,” he says with some frustration in his voice.

Black Hole Vertigo is Jay’s seventh album. He has also released three Christmas albums made up of original and traditional Christmas songs, and a gospel album that includes originals and some well-known hymns.

In 2002, he released Brotherhood, a tribute to the emergency service workers who responded to the terrorist attacks of 9/11. Like most people, Jay remembers where he was and what he was doing when he heard the news of the planes hitting the World Trade Center in New York. A portion of the proceeds for that album went to the Dennis Leary Foundation to support first responders.

Jay’s love of music has been a rock in his life since as early as he can remember. His main source of musical influence as a child was what he found in piano books and during church services.

But he never shut himself out from rock and roll, having heard his dad listening to Elvis Presley, and the sound buried itself deep inside him.

“My musicianship is completely natural,” he says. “My grandma gave me lessons privately. She taught me what she knew. I would learn all the songs in the book, and I would move up to the next one, the next one, and the next one.”

It got to the point where Jay would add his own embellishment to the music, adding what he felt was missing. “Vocally, I learned at UMEI [formerly known as United Mennonite Educational Institute] from Grade 9 to 12. I was in the church choir and was singing all the way back in Sunday school.”

Jay continues to be active musically in church, bringing a creative flair to worship services at Leamington United Mennonite Church, playing  piano, bass and guitar, or through solo vocal performances. Christmas and Memorial Sunday are times that he prepares something particularly special.

In 2019 he introduced “A Christmas to Remember,” a new original song, as a reminder to see through the commercial trappings of Christmas to the Saviour in a manger.

And during Advent he performed his rendition of Simon and Garfunkel’s classic, “Silent Night,” juxtaposing current local and global news headlines. “I wasn’t sure how that would be received,” he muses.

To learn more about Jay’s music or to buy an album, email him at jayceland8@gmail.com or visit bit.ly/jay-richards. 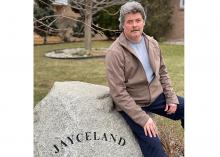