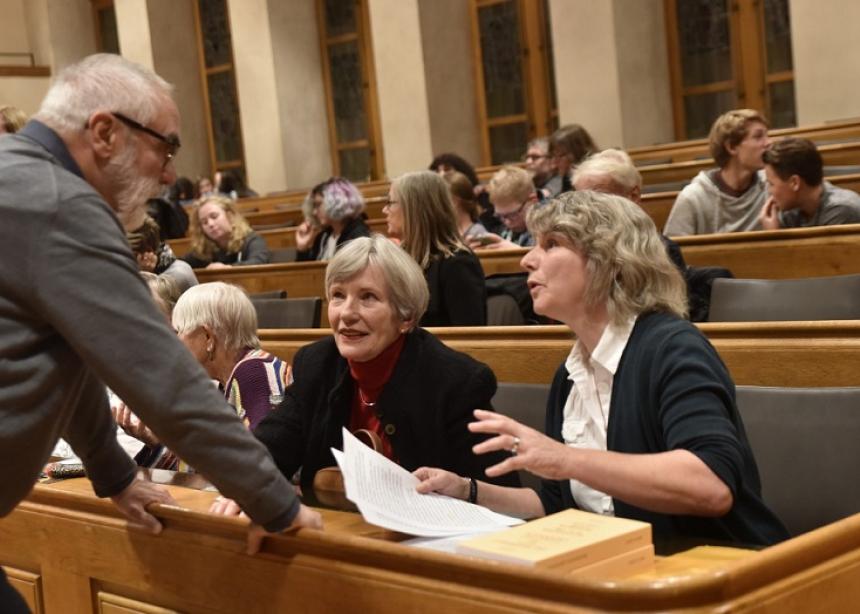 The request was issued Nov. 11 by Bernese government councillor and director of churches Christoph Neuhaus at an event in Bern’s city hall jointly organized by Bern Mennonite Church and the Reformed Church parish of Münster, one of the city’s most important parishes.

“I apologize tonight for all that has been done to the Anabaptists in our canton,” said Neuhaus, who represents the state side of the Reformed Church’s close relationship to the canton government. “No one can undo what was once done. But we can see what has been. Record it instead of casting it out.”

Many members of Bern Mennonite Church were in attendance. Konferenz der Mennoniten der Schweiz (Swiss Mennonite Conference, or KMS) has not officially responded to the request but may this spring.

Bern Mennonite Pastor Dorothea Loosli said the evening was originally intended for the unveiling of the “Stations Path—a series of informational displays about the Reformation and Anabaptist persecution that the congregation developed with the canton. When that project was delayed, the congregation and the parish decided it would be good to still do an event together, and the evening’s theme was shifted to “Time for Peace.”

“Councillor Neuhaus chose the title ‘State and Religion: Curse or Blessing?’ because the canton of Bern recently revised some church laws and there was intense debate about state recognition of [churches other than the Reformed Church], and he knew Mennos did not support that,” Loosli said. “. . . Neuhaus used the platform provided under the theme of ‘Time for Peace’ to make peace in concrete terms. It was unexpected and deeply moving.”

Historical context
Hanspeter Jecker, who has published research on persecution of Swiss Anabaptists in Mennonitica Helvetica, said church and political authorities in Bern cooperated closely on anti-Anabaptist mandates from the 16th century into the 18th century.

“People tried to teach them a lesson, but most of the time the Anabaptists remained stubborn.”

Jecker, who is also coordinator of Bienenberg Seminary’s department of theology and history of Anabaptism, said there are complexities when it comes to figuring who should ask for forgiveness after four or five centuries. Because Switzerland has long functioned as a federation of cantons, a nationwide request of forgiveness wouldn’t be appropriate for the actions of each.

“Bern was invited by Zurich to take part in a joint confessional action in 2004, which Bern refused,” he said. “They wanted and needed to do this themselves and could not just join Zurich.”
He said even though this request does not come from the government and church jointly, it is still significant.

“The Bernese government has formulated here and there one or two words of apology. So it’s not the first time,” Jecker said. “But this is the first time it has happened with such clarity.”

Emotional development
Loosli said she was moved deeply by the request for forgiveness, initially not even sure she heard the words.

“I wish so much that we can utilize the ease that comes from streamlining the past to face the future together, to be very attentive to and respectful of other beliefs,” she said that night in a response that thanked Neuhaus.

Loosli did not accept the apology on behalf of Swiss Mennonites. That role goes to the conference.

KMS general secretary Jürg Bräker said because the request of forgiveness came unannounced, conference leadership was in the early stages of processing it and would meet Nov. 30.
Bräker noted the Reformation’s 500th anniversary had been broadly celebrated in terms of freedom of religion and thought.

“But for a not-so-small group of inhabitants of the canton of Berne, it did not bring freedom but persecution—precisely because of the strong unity between state and church,” he said. “In this context, this speech, by the representative of the state [canton] in church affairs, reminds the state that the matter of freedom of faith is still a very important matter today—for all religions, not just the Mennonites/Christians—and about the large impact that state decisions may have in the area of faith.”