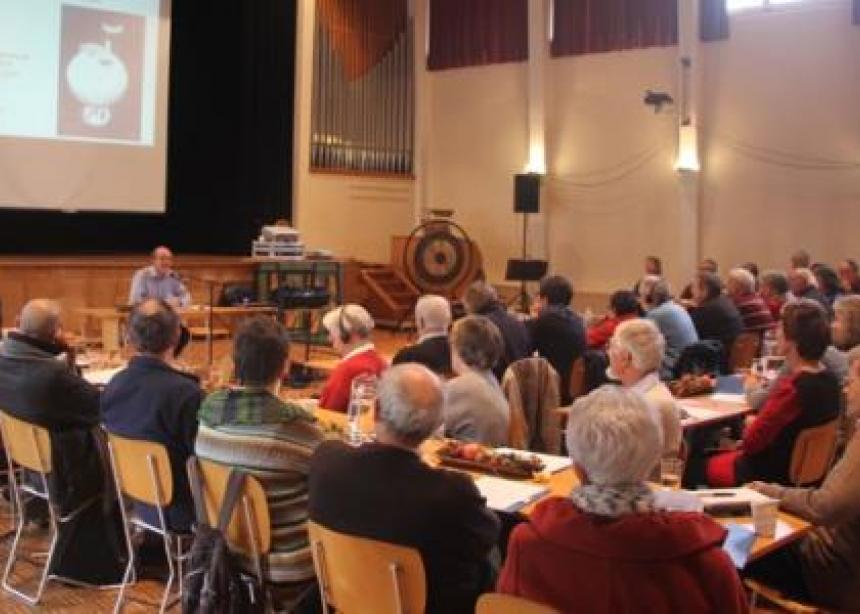 University of Zurich ethics professor Pierre Buehler addresses attendees of a public forum on human rights and faith, organized by the Mennonite conference in Switzerland. (Photo by Samuel Cacciabue)

“Nationalism is on the rise in many parts of the world,” says Juerg Braeker, general secretary of Konferenz der Mennoniten der Schweiz/Conférence mennonite suisse (the Swiss Mennonite church). “Mennonites, because of their view of the relationship between church and state, should be better equipped to point out the dangers of nationalism.”

The Swiss Mennonite church held a public forum in November 2017 to equip attendees to better understand the complex issue as relates to an upcoming legislative change. There is a proposal to cancel a binding reference to the European Declaration of Human Rights in the Swiss constitution. Opponents are concerned the change will weaken commitment to human rights.

The event organizer Anabaptist Forum for Justice and Peace, a working group of the Swiss Mennonite conference, invited speakers from Mennonite churches of Switzerland, from Reformed and Roman-Catholic church, and from political movements that fight against this initiative of national self-determination. The six speakers covered historical, ethical, theological and political aspects of human rights.

Speakers examined “the relationship between Christian faith and human rights as a common base for ethical orientation for all humanity,” says Braeker.

Some 50 people attended, half from Mennonite churches, the rest from other relevant Christian or political organizations.

Theologian and mediator Dorothea Loosli said Mennonites have been crucial in the development of human rights processes. Their defense of religious freedom extends back to a treatise on human rights written in 1647 by Richard Overton, who had connections to Waterlander Mennonites in the Netherlands.

University of Zurich ethics professor Pierre Buehler said the ethical importance of rights is that they are not chosen or defined but inherent. Christian theology expresses this by considering humans as created beings, defined by God, so no ideology of a given group can limit these rights in an absolute way.

Christians in Switzerland who resist the movement to national self-determination are concerned that it does not recognize “a final transcendence [God] to which life—in its political, legal and social dimensions—is referred, and which therefore sets limits to the range of human self-determination.”

University of Zurich ethics professor Pierre Buehler addresses attendees of a public forum on human rights and faith, organized by the Mennonite conference in Switzerland. (Photo by Samuel Cacciabue)