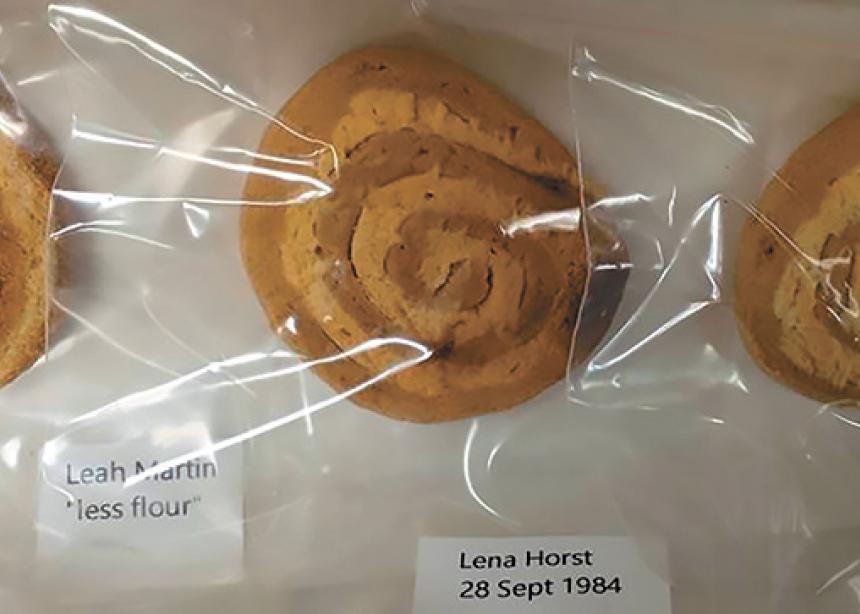 Big city lawyers paid Old Order Mennonite women $20 an hour to bake cookies, all in an effort to gather evidence in “the cookie war.” This “sweet and true tale” was shared recently as part of “The Anabaptist Story lives on: Virtual museum and archive tour,” sponsored by TourMagination, in which archivists and historians show unique artifacts, photos and documents as they share parts of the Anabaptist-Mennonite story.

During a recent virtual tour, Laureen Harder-Gissing, archivist at the Mennonite Archives of Ontario that is housed at Conrad Grebel University College in Waterloo, explained how Old Order Mennonite and Amish women in their kitchens across North America were drawn into “the cookie war,” and how a cookbook featuring many of their traditional recipes held important evidence.

It was the 1980s and the wholesale industrial cookie market was crumbling, according to Harder-Gissing. Consumers wanted something that tasted “authentic and homemade.” In an effort to meet that demand, Procter & Gamble spent six years developing and testing a cookie recipe that was “soft on the inside and crispy on the outside.”

But it seems the idea of an industrialized cookie that tasted homemade had been “oversold,” and companies seeking to “gain market advantage” started to scrutinize their competition, she said. Two of the “big players” in the world of industrialized food production, got into a spat. In 1984, Procter & Gamble sued Nabisco for patent infringement over a cookie recipe. Nabisco set out to prove that the recipe existed long before Procter & Gamble developed it. The recipe in question was for a cookie that swirled together a light sugar cookie dough with a dark molasses dough, for a treat that was both crunchy on the outside and soft and chewy on the inside.

Off went the big city lawyers and their researchers from both sides to gather evidence. It was not long before the trail led them to Mennonites and their recipe books. It appeared that the evidence lay on page 193 of the late Edna Staebler’s Food That Really Schmecks cookbook, featuring traditional recipes from the homes of Mennonites in Waterloo Region. Known as rigglevake kucha in Staebler’s cookbook, which is Pennsylvania German for “railroad cookies,” they are also called pinwheel cookies or ribbon cookies elsewhere.

By the mid 1980s, Staebler’s collection of “simple, country” recipes from Mennonite kitchens, interspersed with stories and commentary, had become “a tremendous hit,” according to Harder-Gissing. Staebler was often called on to “interpret” Old Order and Amish life to an “increasingly curious” national audience.

Staebler had many visits from lawyers, wanting her to find Mennonite women to bake sample cookies. They offered $20 an hour. At first she thought it was “great fun,” according to Harder-Gissing. Later, Staebler was concerned that she and the Mennonite women could be compelled to testify in court. Nabisco lawyers assured her, “Nothing could be worse for the image of Nabisco than subjecting Mennonite ladies in white bonnets to a session in court.”

Lawyers also visited Pathway Publishers and the Amish Historical Library in Aylmer, Ont., where the Amish community magazine, Family Life, was published. They took out an ad in the magazine offering $15 to the first 10 people to send in samples of cookies that were both crispy and chewy. Archivist David Luthy kept some of the sample cookies “for historical interest,” which he donated to the Mennonite Archives of Ontario, along with other artifacts from the Amish community.

The patent dispute was settled out of court in 1989, but that was not the end of the story. Kathleen McDonell wrote a play in 1988 called The Cookie War that was staged at least three times, including at the Blyth (Ont.) Festival and at the United Mennonite Education Institute in Leamington, Ont., now known as UMEI. As the legend grew, it “hit the press nationally” and, while the rights to a movie screenplay were sold, a movie has never been produced, Harder-Gissing said.

Staebler noted that these cookies “are a lot of work” and Mennonite women tend not to bake them on a regular basis. Nevertheless, Harder-Gissing said that, until the case was settled, “I suspect a lot of lawyers ate a lot of cookies!”

This and many other virtual tours in The Anabaptist Story Lives On series can be found at tourmagination.com/vtour-3/.

This article appears in the March 15, 2021 print issue, with the headline “‘The cookie war.’” Do you have a story idea about Mennonites in Eastern Canada? Send it to Janet Bauman at ec@canadianmennonite.org. 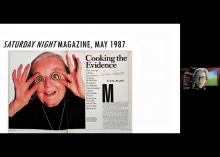 Edna Staebler, author of Food That Really Schmecks, is shown holding the cookies in question, in an article she wrote for Saturday Night Magazine in 1987 about ‘the cookie war.’ The photo was shown as part of the virtual archives tour by Laureen Harder-Gissing, far right, describing a patent dispute over a cookie recipe that drew Mennonite women into the conflict. (Screenshot by Janet Bauman)