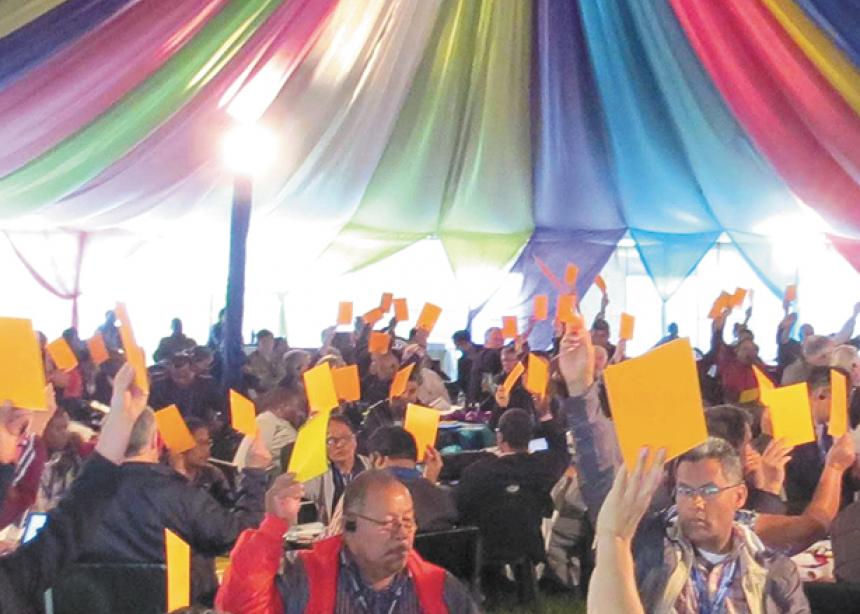 The mission of Mennonite World Conference (MWC) is to create space for the global Anabaptist family to meet together. Much of the time, it is fulfilled virtually, on social media or through email connections across continents.

But once every three years, the General Council, MWC commissions, and the Global Mission Fellowship and Global Anabaptist Service Network gather in person. This year, representatives from up to 107 national churches from 58 countries gathered for triennial meetings for five days in late April in Limuru, Kenya, where they discerned decisions, learned from teaching, ate together and shared their hearts.

Gathered in a rainbow-striped tent that was both a metaphor for the diversity of the gathering and a real tabernacle for God’s people, delegates approved strategic goals for the next three years:

“The unity of the Spirit is the reason we walk together, not the result of walking well together,” said Canadian Bible scholar Thomas Yoder Neufeld, the new Faith and Life Commission chair, and speaker at three plenary teaching sessions. “God is to blame for the diversity in our unity,” he said. “This is a permanent problem we do not want God to solve for us.”

The imagery of breaking down boundaries show how costly peace is, he said. His teaching—that patience, suffering, forgiveness, seeing in each other the face of God, are the ways to walk in unity—was put to the test when delegates experienced pain when disagreement surfaced over the Faith and Life Commission’s proposed guideline on responding to controversial issues.

The document was meant to provide a guideline for dialogue about subjects on which member churches disagree significantly, based on how they have discerned the Bible’s teachings and their implications for Christian living. It declared: “MWC addresses specific topics when one of its member churches officially requests MWC to do so. . . . Unless the conversation calls for a change in the ‘Shared Convictions,’ MWC will not require churches to address topics that they do not wish to address.”

The General Council did not reach consensus on accepting the document, which means that MWC continues without a clear process on how to discuss controversial issues.

• A statement of solidarity with Indigenous peoples, presented by the Peace Commission. It states: “[MWC] desires to follow Jesus’ example to respond to the cries of Indigenous peoples worldwide. This response is not concerned only with caring for people suffering within unjust structures. It also includes efforts to disarm the structures of oppression themselves (Colossians 2:15).”

It expresses sadness for oppression that makes a complete peace impossible. It confesses times when the church has been complicit with oppression, and it repents of participation in violence. It exhorts churches to reject interpretations of the Bible that justify mistreatment of Indigenous peoples.

The declaration cites the request to MWC for prayer and support from La Iglesia Evangélica Unida Hermanos Menonitas de Panamá, which is comprised almost entirely of Wounaàn and Emberá indigenous people of Panama.

• A teaching resource, “Identity and ecumenicity: A theology of inter-church hospitality and denominational identity,” presented by the Faith and Life Commission.

This document cites I Corinthians 13-14 as the point of reference for dialogue with other Christians in a spirit of love. It recognizes the specific gifts and graces denominations carry and share for the benefit of others. It calls MWC member churches “to be ready to live in ‘reconciled diversity,’ being both brave in claiming our denominational heritage . . . , and humble in acknowledging our limited understanding,” as they live out the ministry of reconciliation in the household of God (Ephesians 2:19).

The MWC General Council approved triennial financial projections that maintain the current level of revenue and expenses for core activities at US$800,000 per year. Although “fair share” membership contributions from some Global North members are decreasing, it is hoped that contributions from congregations and individuals will keep core revenue steady. An additional US$700,000 will be needed for Indonesia 2021, including the global assembly, the global youth summit and the next General Council gathering.

Henk Stenvers of the Netherlands was elected to assume the presidency of MWC at the next assembly in Indonesia in July 2021. Rebecca Osiro of Kenya, the current vice-president, was affirmed to serve a six-year term.

Osiro described it as a great honour for Kenya Mennonite Church to host the gathering of Anabaptist leaders worldwide: “We feel encouraged and strengthened that we come to this reality. Where the roads are not defined clearly . . . you bear with us and forgive us. How nice, how pleasant and good that we stay together in unity.” 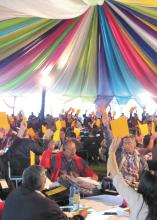 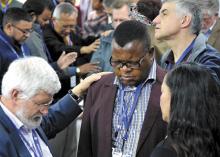 Alexander Neufeld of Germany, left, and Joji Pantoja of the Philippines, chair of the MWC Peace Commission, right, lead prayer for Alphonse Komuesa of the Democratic Republic of Congo. (Photo by Wilhelm Unger)