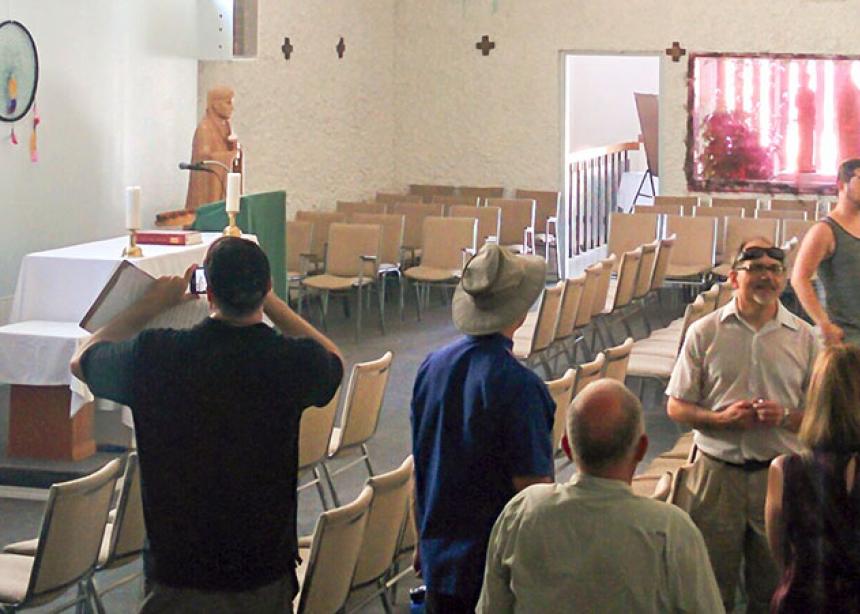 Squinting in the summer sunlight, we glanced across the street as a man stepped out of his car. Guilty as charged. Our walking neighborhood tour, composed of members and friends of Home Street Mennonite Church in Winnipeg, had come to stop at St. Kateri Tekakwitha Aboriginal Catholic Parish on Ellice Avenue in the heart of the city’s West End.

Introducing himself as a member of the staff of the parish, he unlocked the doors and led us to the sunlit rectangular sanctuary. Around the room, symbols, figures and images greeted us in the stillness, some familiar and some not. Our new friend spoke about what we were seeing, the story of St. Kateri, and a bit of the history of the parish and its parishioners. All smiles, we thanked him for the surprise detour, said our goodbyes, and continued our tour with renewed enthusiasm.

Planning that walking neighborhood tour was just one of many adventures Jim Cheng had as a Summerbridge participant at Home Street Mennonite this past summer. Summerbridge is a Mennonite Central Committee Canada program in which participants from Mennonite and Brethren in Christ churches are provided with a stipend that allows them to engage in service or ministry projects.

Cheng completed a bachelor’s degree with a double major in business management and social science at Canadian Mennonite University. “[It] was a complex degree that provided me with a different perspective in community development,” says Cheng, who had not worked in ministry before, but wanted to experience some of what he had studied in action.

As part of his service project, he planned workshops at Winnipeg Harvest, organized young adult events and good soil workshops, mentored a high schooler, helped rebuild Home Street’s website and even did some church renovation.

Soraya Canales-Galdamez
A distinctive of Summerbridge is its focus on a participant’s immediate context.

Soraya Canales-Galdamez emigrated two-and-a-half years ago to Vancouver with her family, where she now attends First United Spanish Mennonite Church. Originally a journalist in her native El Salvador, she has struggled with adjusting to life and her job in Canada.

When a friend suggested trying Summerbridge, she resisted: “I initially said no because of my English.”

But she cut down her work hours and took the risk, taking on Vacation Bible School, family retreat camps, church website updates and coordination of a local food bank, doing it all in English.

The experience brought out the best in her. “[My daughter] was always telling me, ‘Mom, you look happy today. Are you happy?’ ” she says with a laugh. “Before, I was going to church just to learn, but now I want to be involved in everything I can be.”

Mitche Mealey
Summerbridge can also provide a re-centring of a defined career path.

Mitch Mealey is a busy freelance graphic designer and a married father of two living in Moncton, N.B. Summerbridge allowed him to approach seven different churches and non-profits in his community, and give each a week of his time.

“My favourite parts were interviewing them, and learning about their passions and what they’re involved in,” he says.

He designed T-shirts, made logos, updated old flyers and coached people on how to think about visuals.

But the experience has reminded him of the honest purpose in his work. He says, “I will always try to see the face of my client and bring it closer to the face of the ones they are speaking [with].”

What links these experiences is a sharper grasp of the heart of God in community. “I would not be doing this kind of work without my faith,” says Cheng. “Going to church is not just about me. It is also about others: those you serve, those who serve you and those whom you serve with.”

To learn about Summerbridge, visit mcccanada.ca/summerbridge.

Matt Veith is a guest Manitoba correspondent. He also works as a freelance graphic designer in Winnipeg, where he attends Home Street Mennonite Church.