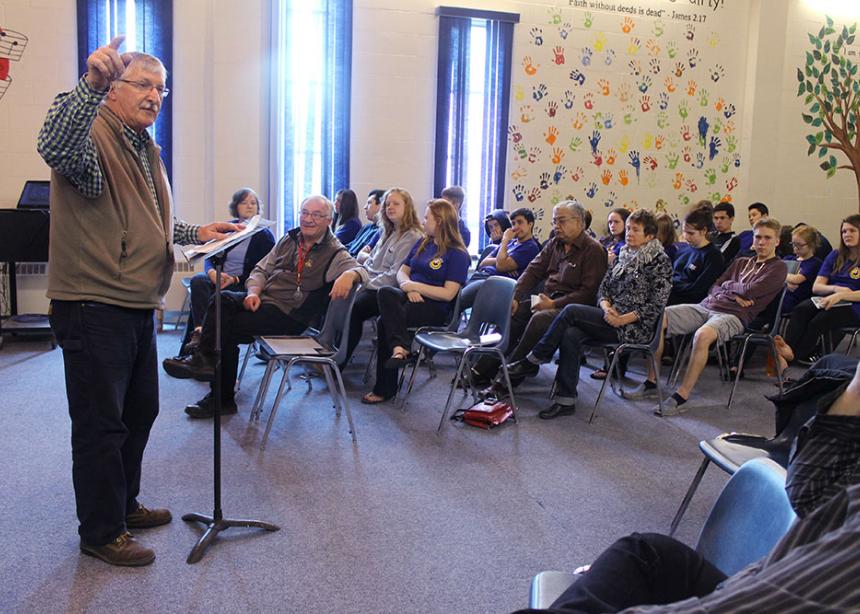 “I feel like a refugee in my own country,” said George Kingfisher. The hereditary chief of the Young Chippewayan First Nation was at Rosthern Junior College (RJC) to tell students how his people lost their land. RJC, partnering with Mennonite Church Saskatchewan’s Walking the Path Committee and Mennonite Central Committee Saskatchewan, invited Kingfisher and others to share their stories during the school’s Alternative Learning and Service Opportunities week.

Teacher Ryan Wood told students at the April 24, 2015, event that RJC sits on Treaty 6 land and the school has benefitted from the injustices of the past. The Young Chippewayan First Nation was the third-largest group to sign Treaty 6 in 1876. In 1879, the government of Canada established Reserve #107 for the Young Chippewayans at Stoney Knoll, about 75 kilometres north of what is now Saskatoon, and just east of the North Saskatchewan River. Whether rightly or wrongly, the government viewed most First Nations as complicit in the Riel Resistance of 1885 and, as punishment for the part they were perceived to have played, denied them food rations and permission to leave their reserves.

Facing starvation on the reserve, the Young Chippewayans went south to Cypress Hills in search of game, said Kingfisher. While they were gone, Mennonites and German Lutherans arrived in the area. Because the reserve was uninhabited, the government allowed the immigrants to take possession of the land. When the Young Chippewayans returned several years later, the land was occupied and they were forced to find homes on other reserves.

For Ray Funk, this story is a personal one. The farm where he grew up, north of Laird, Sask., was once part of Reserve #107. “Nobody thought about the Young Chippewayan people until they came and reminded us one hundred years later,” said Funk. Since 1976 and what he calls “the great awakening,” Funk has worked to redress the wrongs done to the Young Chippewayan people.

It’s a personal story for the people of St. John’s Lutheran Church as well. Their forebears built a church on the summit of Stoney Knoll in 1901. The church was eventually moved to the village of Laird, but the churchyard and cemetery remain. St. John’s pastor Jason Johnson told students about the challenges his congregation has faced in tackling past injustices. “As we [have confronted] our history,” said Johnson, “we have been transformed, and understand a little deeper what redemption means.”

In 2006, the Young Chippewayans, Mennonites and Lutherans met at Stoney Knoll to get acquainted, to share a meal, and to sign a memorandum of understanding, indicating that they would continue to work together to right past wrongs. Canadian Mennonite covered that historic event in its October 30 issue that year.

Leonard Doell, coordinator of MCC Saskatchewan’s Indigenous Neighbours Program, told students that, in response to the memorandum of understanding, MCCS is tracing the genealogy of the Young Chippewayan people to further their claim against the government. Funds for the genealogy project were raised through the Spruce River Folk Festival, held annually at Funk’s farm north of Prince Albert. (See that story here.) With enough money in place to complete the genealogy project, MCCS is currently “pursuing the possibility of purchasing land” for the Young Chippewayan people, said Doell.

In addition, Funk told students, a petition has been drafted encouraging the Rural Municipality of Laird to add the Cree name, Opwashemo Chakatinaw, to the road sign leading up to Stoney Knoll. Walking the Path Committee member Cheryl Woelk told students they would be given opportunity to respond to the stories they heard by signing the petition. “Now you are part of the story,” said Woelk. “How you respond is important.”

Later, students and staff went to Stoney Knoll for the signing ceremony. On the windy hilltop where St. John’s Lutheran Church once stood, Ray Funk read the petition. Harry Lafond, Executive Director, Office of the Treaty Commissioner, Saskatoon, briefly addressed the students. “You get a whole new chapter in the history of a place when you attach the original name to it,” said Lafond. “It’s so much more powerful for us if we can merge our history and make it one story.” Four RM of Laird ratepayers, all members of MC Saskatchewan churches, signed the petition. Finally the students themselves were invited to sign.

For some, it was a deeply moving experience. Alex Keller, a Grade 11 student from Bruno, Sask., found the day’s events to be “really beautiful.” She said that “showing recognition” to the land’s original inhabitants is “really important” and that she felt inspired “to see how passionate people are” about it.

Ally or accomplice: What does the Lord require of us?
Langley church adopts indigenous protocol
Churches ‘on the healing side’

Four ratepayers of the Rural Municipality of Laird signed a petition to include the Cree name, Opwashemo Chakatinaw, on the road sign leading up to Stoney Knoll. The four signers are descendants of the original Mennonite settlers in the area and members of MC Saskatchewan congregations. Left to right, they are Eldon Funk, Allan Friesen, Wilmer Froese, and Ray Funk. George Kingfisher, hereditary chief of the Young Chippewayan First Nation, is seated at the table. (Photo by Donna Schulz)

Rosthern Junior College student Madi Davis (in the red hooded sweatshirt) awaits her turn as her fellow student, Matthias Thiessen adds his name to the petition urging the Rural Municipality of Laird to add the Cree name, Opwashemo Chakatinaw, to road signs leading up to Stoney Knoll. (Photo by Donna Schulz)

Looking west from the top of Stoney Knoll, one can see the banks of the North Saskatchewan River. The gently sloping hill, once home to the Young Chippewayan First Nation, is some of the best farmland in Saskatchewan. (Photo by Donna Schulz)

Should the petition that Rosthern Junior College students signed be successful, this sign will be changed to include the Cree name, Opwashemo Chakatinaw, which translates into English as Stoney Knoll. Over time, the original English name was further changed to become Stony Hill. (Photo by Donna Schulz)