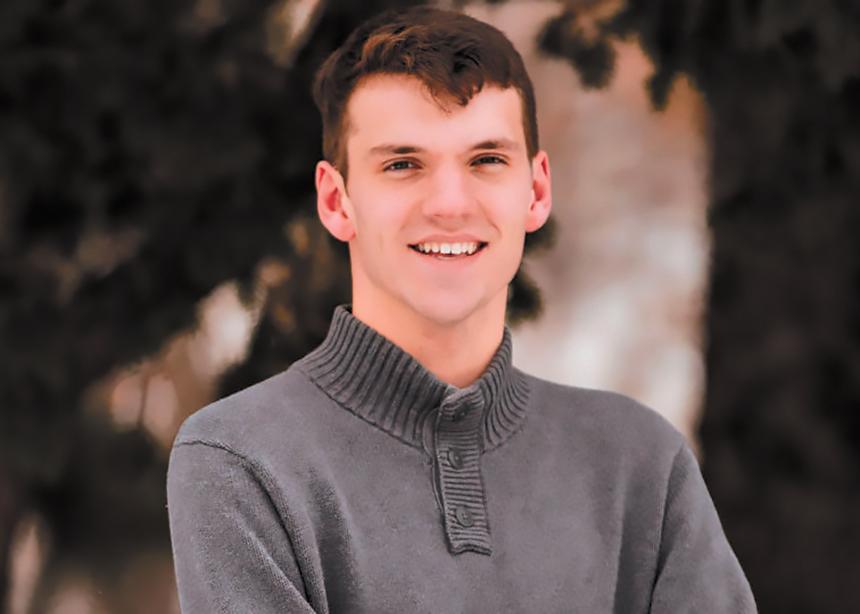 Micah Enns-Dyck is the founder and editor-in-chief of Macrina Magazine. (Photo by Lynette Giesbrecht)

At only 21 years old, Micah Enns-Dyck is the founder and editor-in-chief of a new online Christian philosophical journal.

Macrina Magazine, which he launched on Oct. 26, features written work covering topics in the realm of philosophy and theology. Among the team of editors working on the project is a doctoral candidate and teacher in Australia, a master’s student at the University of Cambridge in England, and a PhD candidate at Princeton (N.J.) University, to list the credentials of just a few. And theologians the likes of John Milbank and Natalie Carnes have endorsed the new digital publication.

Enns-Dyck, who is from Altona, Man., and grew up attending Seeds Church there, is in his fourth year of an undergraduate degree at Canadian Mennonite University (CMU), where he is studying philosophy and theology.

The idea for the magazine stemmed from his meme page on Facebook, “Hauerwasian Memes for Pacifist Teens.” The meme page, written about in Canadian Mennonite earlier this year, has gained more than 9,000 followers since its creation in April 2018.

“Over time, I’ve been amazed at how much influence the page has had,” Enns-Dyck says. “People message me through the page about how the page helped them learn about different sides of the Christian faith, or how they used to be hard-core evangelicals and they’ve sort of left that. . . . That was sort of the wake-up call.”

He started to realize how many people he could reach, especially in combination with the audiences of his friends’ meme pages, which have more than 10,000 followers in some cases. He started thinking about how he could do more with his audience, and use his platform in a more helpful and constructive way.

He brainstormed with his friends, who are administrators of other online meme pages, writers and students, and they came up with the idea of a magazine. He drafted a proposal and sent it to dozens of people he knew would be interested in contributing. “I ended up getting a really positive response, so that sort of propelled it to keep going,” he says.

The magazine publishes many kinds of written work, including essays, personal reflections, poetry and short fiction pertaining to theology and philosophy, although he says the topic is flexible. “We understand philosophy not as an academic discipline but as a way of life,” he says. “We’re just opening things up to the craft of thought and the craft of writing as such.”

That’s one of the reasons they named the magazine after Saint Macrina the Younger, a fourth-century ascetic. As the sister of two major saints of Eastern theology, Saint Basil the Great and Saint Gregory of Nyssa, Saint Macrina was an influential figure in Christian history.

“She is a really interesting figure of piety but also . . . her vision of philosophy was very holistic. She was influential for the monastic movement,” he says.

She embraced the concept of philosophy as a practice that encompasses all of life, including hospitality, prayer, and caring for the sick and poor. “It’s this very vibrant vision of what philosophy is that we often lose sight of if we think of it as this narrow practice of the mind, abstracted from the world,” he says.

This posture has also been reinforced through Enns-Dyck’s education at CMU. “Part of what makes this project possible is my education here, specifically the way in which the intellectual life takes form here at CMU, as this really vibrant, embodied discipline,” he says. “Not just in the method of the university, but also in the professors who are influential in sparking this idea for me and thinking about philosophy in this way.”

All the editors and designers working on the journal are people, or friends of people, whom Enns-Dyck has met on Facebook through his meme page. It has become a whole community. “There’s a group of us that have a group chat. . . . We’ve been talking every day for like two years now, so we’re pretty tight.” He has even met some of them in person.

All the contributors working on the project do so for free. The issues alternate between having themes and remaining general, and each issue is released gradually over the course of a month, with several works being posted every week. 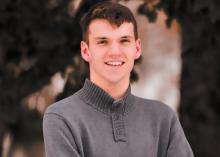 Micah Enns-Dyck is the founder and editor-in-chief of Macrina Magazine. (Photo by Lynette Giesbrecht)