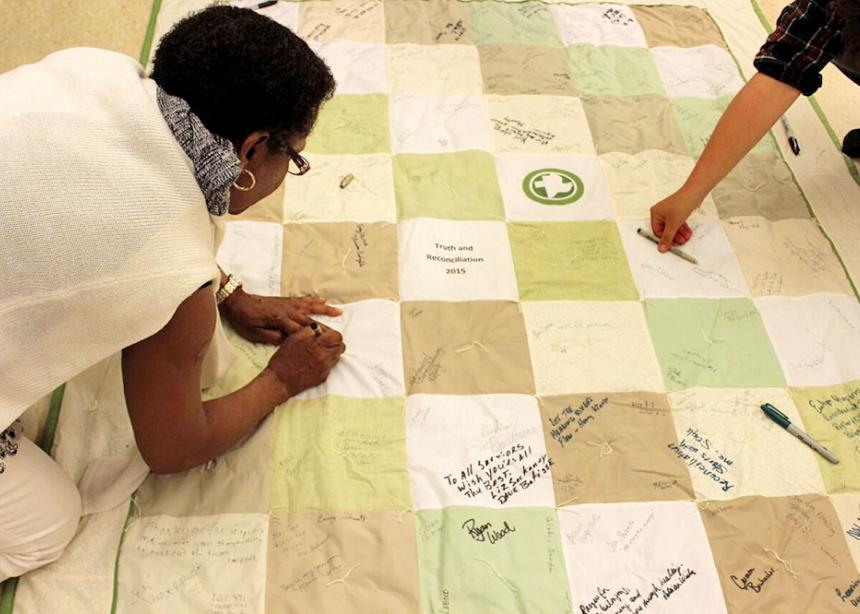 Eighty people gathered in Ottawa Mennonite Church (OMC) on the evening of May 31 for a time of worship and storytelling. Ten were indigenous people, survivors of Indian residential schools, who had travelled from various locations in Ontario to attend events surrounding the release by the Truth and Reconciliation Commission (TRC) of its summary report into the history and legacy of the schools. The visitors were accompanied by Lyndsay Mollins Koene of Timmins,  Indigenous Neighbours Coordinator with MCC Ontario.

Survivors told stories of observing or experiencing sexual abuse in the schools, being forced to eat their own vomit when they became sick, and of looking down upon their parents after a time of indoctrination in the schools.

From the other side, one OMC member said that her parents worked in a residential school. “They were kind and loving people but they were part of a system which did a lot of harm. I feel some amount of guilt and shame on behalf of settler society for this.”

The group shared songs and scripture readings in addition to the stories. People also wrote messages to survivors on an MCC blanket, which will be deposited with the National Centre for Truth and Reconciliation in Winnipeg.

Dennis Gruending is an Ottawa-based author and blogger and a member of the Parliamentary Press Gallery.