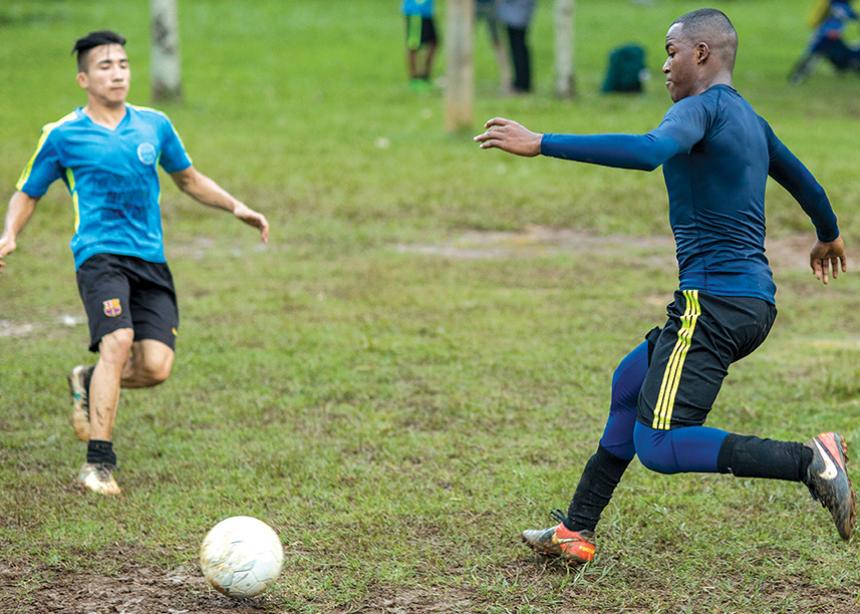 When Sigifredo Godoy talks about living out his faith, he’s talking sweat and strategy—the commitment, knowledge and skills that shaped him as a professional soccer player. That’s what he’s now passing on to young men from some of the most violent areas of his home city, Cali, Colombia.

“I’ve always thought that if God gives me a gift or talent, I need to use it to serve,” the 49-year-old says.

So when he began to look at creating a soccer school in Cali, he shaped it around reaching out to youth that other soccer programs might be leery to serve, whether because they are from areas known for gang violence or because they don’t have money for fees or training.

“There are a lot of youth that are going on paths they shouldn’t be,” says Godoy, a member of Light and Life Mennonite Brethren Church. “The traditional evangelism routes we had weren’t really allowing us to get close to them.”

Soccer, though, provided a way to enter into marginalized communities and to be active in the lives of youth there. People knew Godoy from his days of playing as a professional, and youth were eager to be coached by him.

Today, about 50 young men, aged 14 to 25, are part of Godoy’s soccer school. This is one of more than 20 local church initiatives that Mennonite Central Committee (MCC) supports in Colombia. The funding helps Mennonite Brethren and Mennonite churches reach out to children and youth in their local communities.

“This is a way to present Jesus in whatever stage these youth are in at any moment, to show them how to live your faith in real life,” Godoy says of the soccer school.

It’s also a route to the skills needed to try to play professional soccer. Practices are intense—two to three hours each day no matter the weather. “For soccer, there’s never a bad day,” Godoy says.

The majority of the time is spent on conditioning, drills and strategy, all practised without a soccer ball. “The ball is the last thing you work on,” he says. “You have to know what to do with the ball. You have to know in your position, if you get the ball, what you are going to do. You need to have a strategy before you play.”

On Tuesdays, players gather with Godoy at his church. While this meeting isn’t required, many players choose to come and talk about faith and getting to know Christ, as well as other themes like handling anger or dealing with professional soccer contracts. Youth hear about the church’s emphasis on nonviolence and learn about legal alternatives to required military service. The program provides opportunities for them to meet with a psychologist.

For players like Duvan Rodriguez, the muscle and skills he’s gained have been matched by a growth in self-confidence and new approaches to conflict. “Before, if I had a problem with someone, I might yell or want to fight,” he says. “But that’s gotten a lot better. I talk now with the other guys in a much more peaceful way.”

As part of the Tuesday meetings, he, along with other players, wrote down weaknesses. He put his on the wall, a way of reminding himself daily of what he wants to overcome.

“I told my mom, ‘They don’t teach you just how to be a better football player on the field, but to be a better person,’” 18-year-old Jaiver Valencia says of his first eight months in the program. “I’ve changed a lot. I’m not so arrogant when I play. I’m more responsible.”

But part of what players such as Valencia want to overcome or change is not easy to avoid—the violence and gangs that dominate many of the neighbourhoods where they live.

The support from MCC helps pay for snacks for the team and for transportation so youth don’t have to walk or ride bicycles to practice, which leave them more vulnerable to attacks. Some days, youth let Godoy know they can’t come to practice because there are gunfights in their neighbourhood and it’s too dangerous to go out.

But the violence remains part of daily life. Player Stiven Castro, living in an area held by many different gangs, must cross an invisible boundary, an unmarked but dangerous line between territories of different gangs, every time he goes to his church. It’s been fine so far, he says, “but I always go in the company of God.”

It doesn’t always work out so well. Last October, Valencia’s brother was killed crossing an invisible boundary. In response, Valencia is devoting himself to the dream his brother had for him—to play professional soccer and to travel, to find an option for life outside of the possibilities he sees in his neighbourhood. “This is something I promised my brother I was going to do,” he says.

As he does, he’s holding close to the ideas and hope he’s found through Godoy and the Tuesday meetings, exploring questions like how to be joyful and how to be happy, even in the midst of challenges. “How do we get out of bad situations?” he reflects. “How do we maintain a smile on our face? How do we keep finding ways to keep moving forward?” 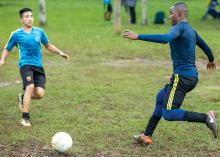 Teammates Johan Esteban Carvajal Motoa, Duvan Rodriguez and Stiven Castro hone their skills after a soccer practice in Cali, Colombia. They are part of an MCC-supported soccer school that reaches out to youth living in areas where gangs and violence are prevalent. (MCC photo by Colin Vandenberg) 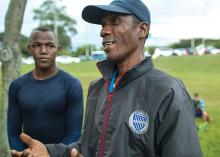 Soccer player Stiven Castro, 16, meets with instructor Sigifredo Godoy after a practice in Cali, Colombia. MCC supports the work of Godoy, a former professional soccer player, who runs a soccer school that reaches out to youth living in areas where gangs and violence are prevalent. (MCC photo by Colin Vandenberg)

Goalkeeper Duvan Rodriguez, 18, reaches to grab a field marker used to teach specific skills during soccer practice. Rodriguez says that being part of the soccer school, at which players are also taught how to manage their anger, has helped him resolve conflicts with words instead of violence. (MCC photo by Colin Vandenberg)

I like these kind of strategies to unite the youth and keep them out of violence. Being a youth leader in the Mennonite church in Ghana, games become our hobbies when reach youth day celebration in every district. Keep it. We will always update you on any youth program we will have, so that Canadian youth and youth in Ghana will be one.