Stories by the shore

MCC staffers, supporters share about their work ‘In the name of Christ’ 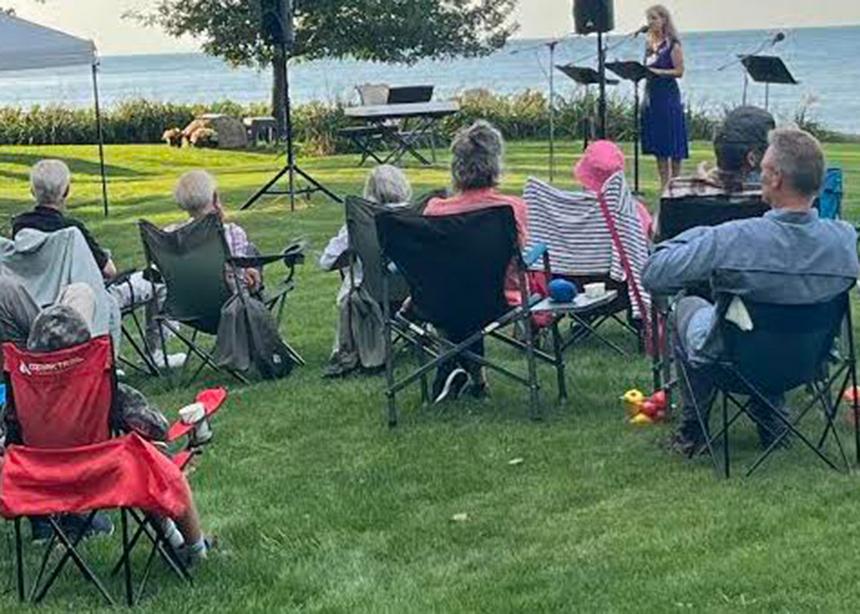 Darlene Bartha, standing at the microphone, hosts the evening at the lakeshore. (Photo by Randy Klaassen)

After a rainy day on Aug. 30, about a hundred guests enjoyed a balmy evening on the shore of Lake Ontario, listening to stories shared by various Mennonite Central Committee (MCC) Ontario staff.

Abe Epp, a longtime fruit farmer on Lakeshore Road in Niagara-on-the-Lake, invited MCC to use his beach-front property to host this event called “MCC stories by the shore.”

As guests arrived, they enjoyed light refreshments, mingling and listening to music provided by John Sherwood on keyboard and Glendon Smith on saxophone.

Wendy Adema, MCC Ontario’s program director, shared examples of personal stories from the five areas she works with: packing kits for flood victims, restorative justice for those leaving the prison system, walking with people in poverty, those coming through migration and resettlement journeys, and building awareness with the Indigenous Neighbours program.

Scott Morton Ninomiya, MCC Ontario’s Indigenous Neighbours program coordinator, told how he reimagined the parable of the sower. He explained how important it is to send seeds, gardening tools, greenhouses and potato seedlings to northern Indigenous communities, and how these items help build community relationships, connect youth with the elders, improve health and strength, and increase cultural survival and build self-esteem. He mentioned listening and learning tours to visit northern communities.

Dorothea Enns, a staunch MCC supporter, explained how she came by the name of Pencil Crayon Queen. She told the story of her mother distributing MCC care packages in refugee camps in Europe after the Second World War, and how her sister came to understand the meaning of the words “In the name of Christ,” and the joy of opening an MCC package of clothes, books and trinkets.

When she was attending school in the Niagara Region in the 1960s, students were given school supplies at school, but these did not include pencil crayons. Later, when parents bought school supplies, she was buying items for her own children, always making sure to include pencil crayons. While buying for her own children, she bought extra and started donating to others. In the first year, she donated 12 kits. These donations kept growing and, over 20 years, have reached a thousand kits a year.

After a musical interlude with a vocal ensemble from Niagara United Mennonite Church in Niagara-on-the-Lake, Rick Cober Bauman, MCC Canada’s executive director, told stories of people living in Ukraine amid the current war. In the midst of death and destruction, MCC’s shipments of meat and comforters are bringing a glimmer of hope to a hopeless situation, he said. Transporting containers to Ukraine is more difficult now, not being able to use the port in Odessa but having to move goods overland.

He went back a hundred years in history, when many of those present had families in Ukraine who were helped through MCC. And now, he said, “MCC is strong because of a deep investment in touching the needs of the world. MCC, at its best, is a thin membrane that allows each of you to feel need, to feel loss, and then, in your giving, to be changed by your encounter of sharing God’s love.”

He concluded by sharing prayers given to him by MCC’s colleagues in Ukraine. He asked those in attendance what prayers they would like to share with their friends and neighbours in Ukraine. He said he plans to share these with partners in Ukraine in the coming days and weeks. 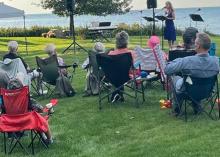 Darlene Bartha, standing at the microphone, hosts the evening at the lakeshore. (Photo by Randy Klaassen)