Still the same inside

Nursing home resident looks for opportunities to help others 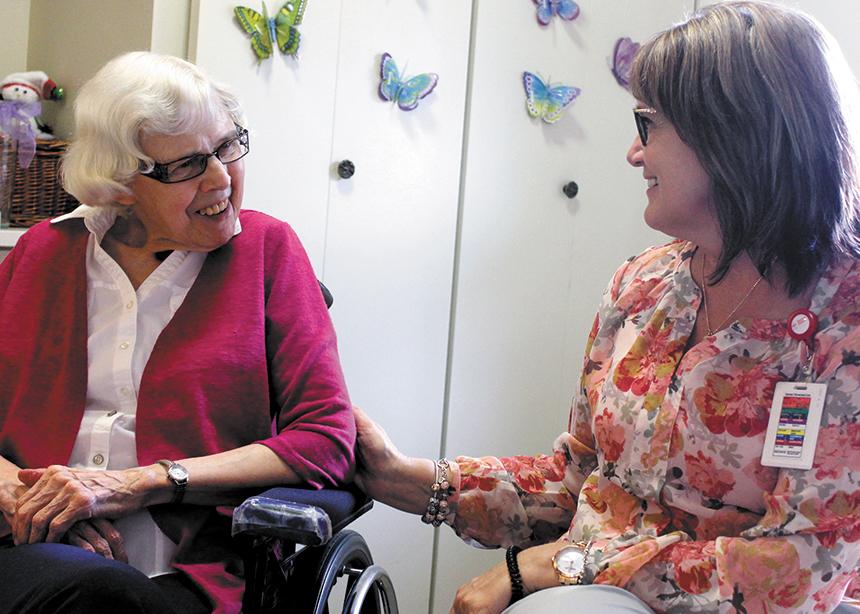 For Anita Lehmann, home is the dementia unit at the Mennonite Nursing Home. But unlike most of the unit’s 29 other residents, Lehmann doesn’t suffer from dementia.

When it became evident she needed care, Lehmann took the only room available in the 68-bed facility, which happened to be in what staff refer to as the secure wing.

Situated just east of the town of Rosthern and 69 kilometres north of Saskatoon, the nursing home is part of a larger complex that provides housing and care for seniors at various levels of care. The west wing is home to residents who require care but are in no danger of wandering.

The secure east wing is a safe place for those suffering with dementia or the effects of brain injuries. Residents’ rooms are laid out in a loop around a central nursing station and common living area. Residents are free to wander the loop but are prevented from straying beyond.

Since moving to the nursing home in February 2017, Lehmann has been offered a room in the unsecured west wing, but has chosen to stay where she is. “It’s a little community,” she says. And while she appreciates the sense of community in the secure wing, she also works to foster it.

Although she herself is wheelchair-bound, Lehmann looks for opportunities to help others. At meal times she sometimes helps her cousin. “I know she appreciates it so much when I come to her and talk to her and help to undo her bib and clean her up,” she says. But when the home’s administrator, Joan Lemauviel, commends and thanks her for doing this, Lehmann is quick to respond, “Oh no, I don’t need any thanks, that’s for sure not!”

“Each one is different,” she says of her fellow residents. “And I try to go to them and talk to them. There’s at least two that I know of that don’t talk—no, even more than that—but I can kind of get it out of them, you know, what they’re feeling like.”

“Anita’s always a very positive person,” says Lemauviel, who appreciates the gentle way in which Lehmann approaches other residents and encourages them. And Lehmann concurs: “You kind of have to know how to approach them, and then they’ll open up to you.”

She tells of one interaction with a non-verbal resident whose name is Donna. “I went to [her] and I said, ‘Hi Donna, how are you doing today?’ And I got a smile out of her, but she went like this [Lehmann shakes her head] and [I knew] she wasn’t feeling up to par.”

Karen Chaskavich, the home’s director of care, recalls seeing Lehmann interacting with the home’s youngest resident, a 25-year-old man with a developmental disability that prevents him from walking or speaking. “He had a teddy bear,” says Chaskavich, “and she was using the bear to try and communicate with him.” In her gentle way, Lehmann was able to touch something within the young man and get him to giggle, says Chaskavich.

It takes a bit of skill to communicate with her fellow residents. “They say you have to have the—well, I don’t want to say the know-how—but you know, it kind of is that way,” Lehmann says, adding modestly, “It’s sort of my nature.”

Living in the secure unit hasn’t always been smiles and giggles. Those suffering with dementia may behave inappropriately at times. “There is a side to coping with them, because some of them can get quite aggressive,” she says.

Amos Fehr, the home’s chaplain, remembers that there were some residents who made life rather stressful for Lehmann when she first arrived.

In spite of this, she chooses to remain in the secure wing. She has made friends there, and feels she has something to contribute. “When you’re a Christian, I feel that you should be able to do that, and that you should do that,” she says of caring for those whose needs are greater than her own.

See more in our Focus on Seniors:
Green bench wisdom
‘God just isn’t finished with me yet
A soon-to-be-favourite recipe 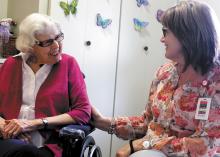