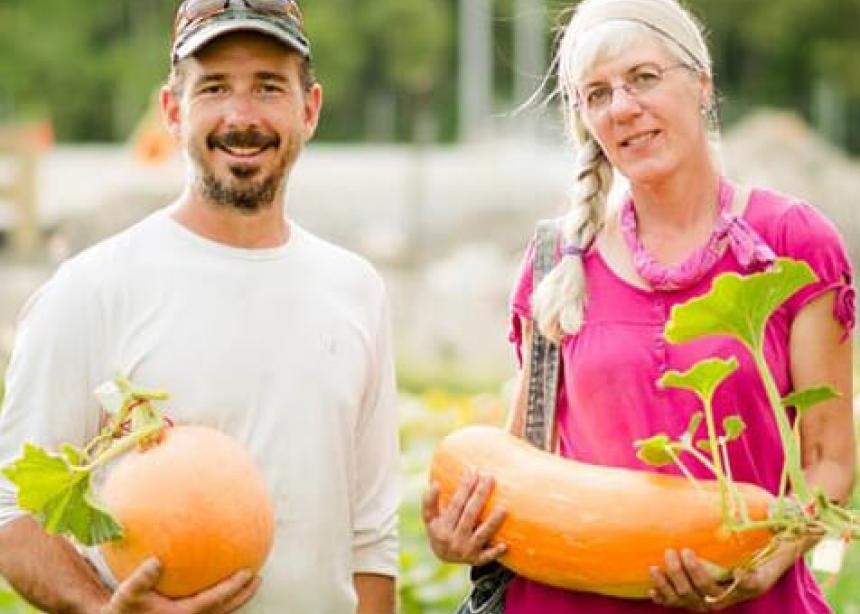 Canadian Mennonite University (CMU) made headlines this fall when it was revealed that workers at its CMU Farm had successfully grown an ancient variety of squash from seeds shared with them by the White Earth Seed Library in Minnesota. The squash was grown in collaboration with members of Manitoba’s Métis community.

The story that accompanied the “Gete-Okosomin” squash seeds was that they were found in a clay ball at an archaeological excavation near the Wisconsin-Illinois border. It went on to suggest that the dating of the clay ball indicated that the seeds were more than 800 years old.

The story captured the imagination of seed savers and gardeners across the continent. It is a good story—but how true is it?

Kenton Lobe, an instructor in international development studies at CMU and one of CMU Farm’s founders, smiles. “The truth of the story of these squash seeds is still emerging,” he says.

Further digging into the history of the Gete-Okosomin seeds—which, roughly translated, means “cool old squash”—revealed that they were originally given to David Wrone, an emeritus University of Wisconsin historian, by some elder women gardeners from the Miami Nation in Indiana in 1995. One of these squash had been grown and saved by the Miami people for many generations, perhaps even thousands of years.

The men and women stewarding the seeds took care to grow them so that they would not cross-pollinate with other kinds of squash, maintaining the variety and characteristics that Lobe suggests resulted in a tasty and prolific squash.

One of the squash grown this season weighed in at more than 14 kilograms.

In a note to the White Earth Seed Library, Wrone, who has spent much of his career studying the history of indigenous peoples around the Great Lakes, relates that he had earlier received squash seeds that had been found deep underground in a cave in Kentucky. They were well preserved in perfect temperature and humidity, and were estimated to be several thousand years old. Wrone reports that he grew them out, but that they were “smallish and not as tasty.”

The seeds from the Miami women were shared with Wrone and eventually with the White Earth Seed Library. Over time and through many tellings, these two squash seed stories crossed and turned into one. The seeds shared with CMU Farm were, in fact, those grown by the Miami women.

“The truth is, the work of seed saving has opened up space for indigenous-settler dialogue and has been both hopeful and helpful,” Lobe says, adding that CMU Farm lies on what was a Métis river lot in the 1870s, and which is still part of Treaty 1 territory.

While the new development in the Gete-Okosomin story may not seem as exciting as the story the farmers originally received with the seed, it is still fascinating, and shows the care and commitment the Miami people had for this variety of squash.

“The story opens up people’s imagination to indigenous seed varieties and the stewarding of agricultural biodiversity, which has been done by indigenous farmers from time immemorial,” Lobe says, adding that the story “plays a part in cultivating agricultural biodiversity on the farm and in restoring relationships with people who were here before the Mennonites arrived in this region.”

The squash seeds will eventually be available for sharing through the fledgling Red River Regional Seed Library hosted on CMU’s campus. 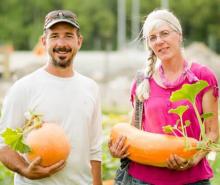 In the photograph at the beginning of the article Caroline Chartrand is holding a Gete Okosomin squash. Kenton Lobe is holding an Arikara squash, a another variety that was being grown out for seed at the CMU Farm.