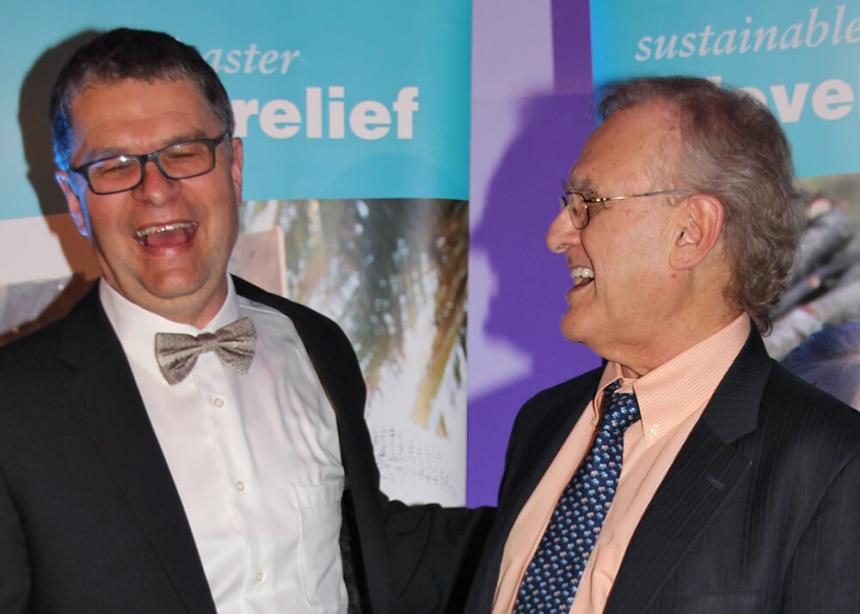 “Don’t get too used to this kind of event,” said Rick Cober Bauman, executive director of Mennonite Central Committee (MCC) Ontario, to gales of warm laughter as he welcomed around 500 participants to the organization’s “first-ever signature event,” a four-course dinner at the St. George Banquet Hall in Waterloo on March 30. In spite of the splendour and glitz of the evening, he was at pains to note that MCC still wants to feel at home at ham and scalloped potato dinners in church basements.

The event, dubbed the Power of Partnership, was a celebration of the many refugee families from Syria that MCC has been able to help settle in the past months, as well as a fundraiser to be able to continue the work. Tickets were $150 each or $1,350 for a table of 10. Many local businesses sponsored their own table.

Featured at the event was a refugee sponsorship group from Waterloo Region, comprised in part by the mayors of Kitchener and Waterloo, Berry Vrbanovic and Dave Jaworsky, respectively, and Dan Herman, executive director of the Centre for Digital Entrepreneurship and Economic Performance. The group formed last fall after seeing the photo of Alan Kurdi, the Syrian refugee toddler who drowned as his family attempted to cross from Turkey to Greece.

A short video created by Rosco Films of Kitchener showed the group picking up its family from a hotel in Toronto and bringing them to their new home in Kitchener. Vrbanovic noted that when he saw the two-and-a-half-year-old in the family, he was an emotional wreck. Vrbanovic called his own mother after that, asking her what it was like in the late 1960s when their family had fled Yugoslavia for Canada, and he was the age of the Syrian toddler he was helping to sponsor to a new life in Canada.

The capstone of the evening was an address by Stephen Lewis, former leader of the New Democratic Party of Canada, Canadian ambassador to the United Nations, professor at McGill University in Montreal and Ryerson University in Toronto, and a tireless worker against HIV/AIDS and for gender equality in Africa. Gasps followed his very free description of violence against women in places like the Democratic Republic of the Congo, and he challenged MCC to make gender equality its central purpose around the world.

Lewis noted that, as a social democrat, he struggles with parochial organizations like MCC. But he said to great applause, “I like MCC,” using words like “integrity,” “real” and “authentic,” and noting that MCC works without religious or ideological imperatives in human and humane ways. “Gobsmacked” was how he described his response to what he called MCC’s “reach and range.”

On a very serious note, and with the evening’s focus on refugees, he added that, with climate change happening, the industrialized nations can expect “tens of millions of environmental refugees by 2050.” 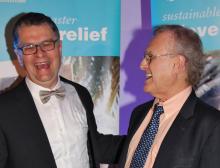