Step back in history

‘We hope to . . . use [Brubacher House] as a place that can further reconciliation,’ says Laura Enns 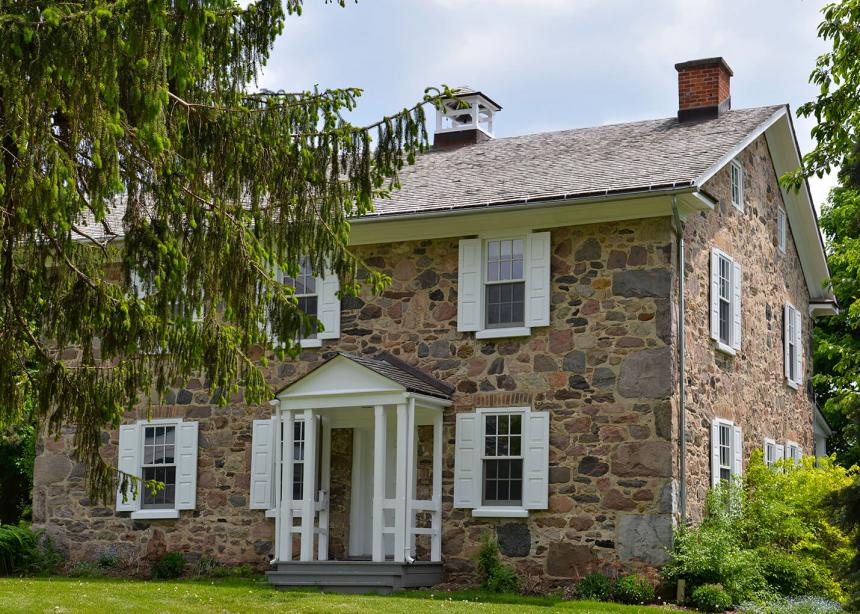 That’s just one of the facts Joshua and Laura have learned since they took over as hosts of Brubacher House in Waterloo, Ont., at the beginning of February. Once home to Magdalena and John E. Brubacher and their 14 children, Brubacher House now operates as a museum on the University of Waterloo campus and serves to educate and interpret the Pennsylvania German Mennonite way of life to visitors. As hosts, the Ennses live in the house, serving as its guides and caretakers.

The couple, who attend Waterloo-Kitchener United Mennonite Church in Waterloo, applied for the job after spending time as volunteers with the Iona Community in Scotland. “Having had these experiences . . . we were interested in learning [more] about our own heritage and sharing that with others, so it felt natural to come back and continue doing that in Waterloo,” Laura says.

In Scotland, the couple lived and worked at heritage sites. Joshua, 27, volunteered at an off-grid activity centre in an old fishing bothy (cottage), and Laura, 26, served as a music assistant in an abbey.

“We were inspired by how these organizations were doing a lot of amazing and very relevant peace and social justice work . . . using these old buildings,” Laura says. “They brought together these historical values [and] traditions, and [made] them relevant for today.”

The University of Waterloo bought Brubacher House, which was built in 1850 in a style typical of Pennsylvania German architecture, in 1965. The university has preserved and restored it as a reminder that the total 405 hectares of the university campus were once owned by Mennonites and devoted to agriculture.

Marlene Epp, professor of history and peace and conflict studies at Conrad Grebel University College, says that the location of Brubacher House on the edge of the David Johnston Research and Technology Park is noteworthy.

“It’s a large public university, it’s known for its engineering and IT [information technology] innovation, and so to have the contrast of this mid-19th century homestead of Mennonite settlers and the research technology developments around it makes it interesting,” Epp says. “It’s an opportunity to step back into history and learn how people lived in this area in the mid-19th century.”

Brubacher House is open from May 1 to Oct. 31, Wednesday to Saturday in the afternoon, or at other times throughout the year by appointment.

Joshua and Laura are excited about their work because it provides an opportunity to live closer to the land, and to build community around the arts, social and environmental justice, and their Mennonite heritage.

“One thing we’re really excited about . . . is the gardening,” Laura says. “There’s a sizable gardening plot that we’d really like to dig into a bit this spring and incorporate into the tour as much as possible.”

As a community musician, Laura is hoping to facilitate music nights that will help visitors engage with Brubacher House. She is also in conversation with a local theatre group about the possibility of writing and staging a site-specific play at the house.

The majority of people who visit Brubacher House are not familiar with Mennonite history. Joshua says that he is looking forward to having conversations with visitors about historical Mennonite values like simple living and pacifism, and how these values speak into Mennonite lives and culture today.

“We want to give voice to what’s so cool about being a Mennonite,” he says. “We want to ask: ‘What do the values of the people who lived in these historic places 150 years ago have to say to us today?’ ”

“There’s an opportunity for people who do heritage narratives or history storytelling in this area to think in new ways about that,” Epp says. “Laura and Joshua are the kind of people who will probe those questions, and I’m certainly excited and happy if they do.”

Laura says that she and Joshua are serious about trying to implement some of the Truth and Reconciliation Commission of Canada’s calls to action in their work. “This house, I think, is very much a symbol of Mennonite settlement in . . . southern Ontario, and so that carries a certain responsibility in terms of telling the history accurately,” Laura says. “We’re not just beginning from when the Brubachers arrived here, but starting with who the caretakers of the land were from time immemorial.”

“In a lot of our events and projects this year, we hope to engage with local indigenous groups to help us tell that story better, and also use this house as a place that can further reconciliation, and help us rebuild our relationships with indigenous peoples and the land,” she adds. 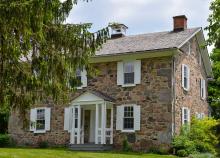 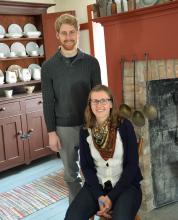 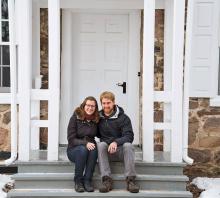 Love the story - brings back many good memories. My wife Judith and I were the curators at Brubacher House from 1994-2000 and enjoyed the unique setting and the many interactions with guests. We delved into the Pennsylvania German history, of the family and area, as curious newcomers to that side of the Mennonite story. I am so glad to learn of Joshua and Laura's commitment, as part of their curation, to also share the long history of the indigenous peoples who have lived in the Waterloo region. This is something, regrettably, that we did not fully know or properly honour at the time. I pray that we all can learn the "long history" of our own local areas - and in the spirit of the TRC, to work at reconciliation with our indigenous neighbours.

I echo Arlyn's comments. My husband and I took over as hosts from Arlyn & Judith in 2000 and we benefited from their work in detailing the Pennsylvania German history. Our personal interests led us to explore the food and gardening of the time. We expanded the vegetable garden at the house and delighted in experimenting with, and sharing, recipes from around that time period for preserving the harvest. (A personal favourite was crab-apple jelly made from the trees just steps from the front door). Like Arlyn, I am glad to know that the history of the indigenous peoples will now become part of the story at Brubacher House. Thank you, Joshua & Laura, for expanding this important piece of our local, shared history. I have always appreciated how each host couple brings something new to the house. I look forward to visiting and learning this summer!! Best wishes to you both!