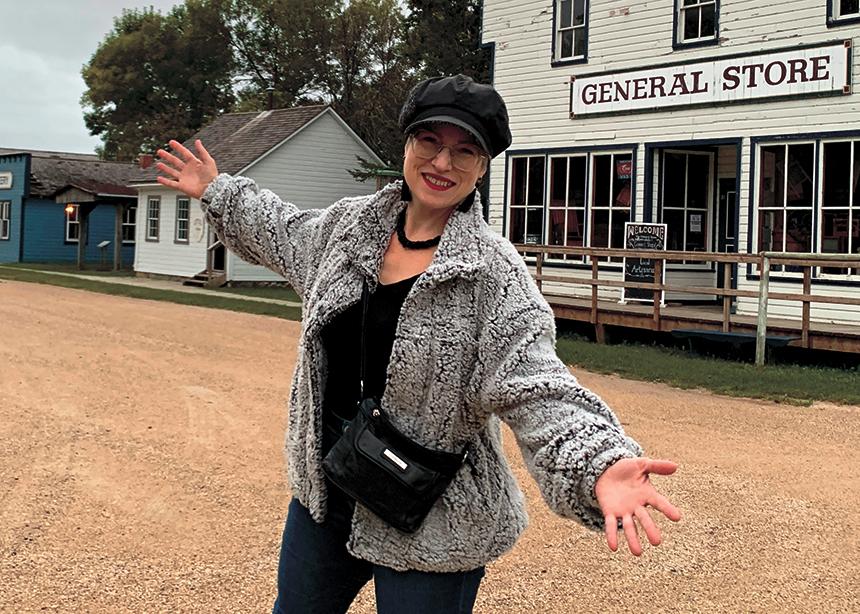 Erin Koop Unger has travelled the world, but these days it’s Manitoba and the Mennonites who live there that have captured her imagination.

Koop Unger is the creator of Mennotoba.com, a website where she writes about Mennonite history and culture in the keystone province.

The 44-year-old Steinbach resident started the website in 2017 with her husband, Andrew Unger, as a companion to his satirical website, The Daily Bonnet. While The Daily Bonnet exists to poke fun at Mennonites, Mennotoba aims to tell true stories.

“We were both getting very interested in what it even means to be a Mennonite here,” Koop Unger says. “I know that’s a hotly-contested subject, but [we were] just sort of pushing at it and exploring it.”

A copywriter by profession, Koop Unger reflects on a variety of topics on the website. Some articles recap visits to historical sites and archives, while others reflect on lectures at academic conferences or books she’s reading.

“[It’s] a place to process and have a conversation about what I’m learning on this journey,” she says.

Koop Unger previously wrote a travel blog called Misadventurer in which she reflected on the travels that have taken her and her husband to every continent except Antarctica. Misadventurer provided further inspiration for Mennotoba.

“We were travelling and learning things about other cultures [by] spending time elsewhere, and it always made me curious about my own story,” she says. “I didn’t really understand Steinbach and Mennonites, and I really should—I’m a Mennonite from here.”

Although she is descended from Russian Mennonite immigrants, Koop Unger’s family didn’t talk about that history when she was growing up. She was raised on a dairy farm situated between the predominantly Mennonite communities of Kleefeld and Grunthal, and her family attended an evangelical church.

When she married Andrew 20 years ago, the couple attended an Evangelical Mennonite Conference church where Andrew’s father was the pastor. In recent years, they’ve transferred their membership to Grace Mennonite Church, a Mennonite Church Manitoba congregation in Steinbach. They had no problem with the church they attended previously, but were inspired to attend Grace by the things they were discovering while exploring their history.

“We were learning about Mennonites so much and the peace [stance] really spoke to us,” Koop Unger says. “It felt like a natural move and an honest move to sort of reclaim [being] Mennonite for ourselves. Grace Mennonite really aligned with that.”

Mennotoba receives anywhere from 3,000 to 10,000 unique visitors each month, depending on how often Koop Unger posts. She doesn’t pay too much attention to the numbers, preferring instead to keep her head down and write. She does appreciate hearing from readers, though.

“I like having a place where I can bring these thoughts and ideas and present stuff and get either affirmed or corrected,” she says. “The people that connect with me because they read the blog are quite intelligent and it’s just a pleasure to have my thoughts read and responded to by people who are really thinking about it and exploring different facets of [being Mennonite].”

One of those readers is Sharon Neufeld, a 67-year-old retiree who has followed the website for the past few years. The Winnipeg resident has Russian Mennonite ancestry, was raised in Steinbach and grew up speaking Low German, so many of her interests dovetail with Koop Unger’s.

“I love Erin’s [website] so much because she writes about Mennonite history but also her daily life, and I can relate to so many things that she writes about,” Neufeld says. “I really respect her as a woman for putting her voice out there and doing what she does. It takes a lot of courage. And she’s funny. She’s so humorous.”

“She writes as someone who is still trying to understand,” says Friesen, 77, an amateur historian who has published three books. “She doesn’t simply declare, ‘I’m Mennonite and I know all about it.’ She says, ‘I’m Mennonite and I’m inquiring.’ I love that attitude and it’s interesting to read.”

While talking about Mennotoba and the historical sites she’s visited, Koop Unger recalls something her husband recommends: before travelling somewhere, you should read a book about your destination so that you can better appreciate your surroundings once you arrive.

The same thing applies when visiting historical sites in Manitoba, Koop Unger says. And if you don’t have time to read a book, there just might be an article on Mennotoba.com that discusses the history of where you want to go.

“If you bring your knowledge of what happened in that place,” she says, “the meaning kind of blooms out from there and it becomes even more exciting.” 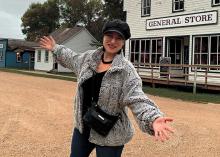 Keep it up. Keeps me aware of my Steinbach roots.