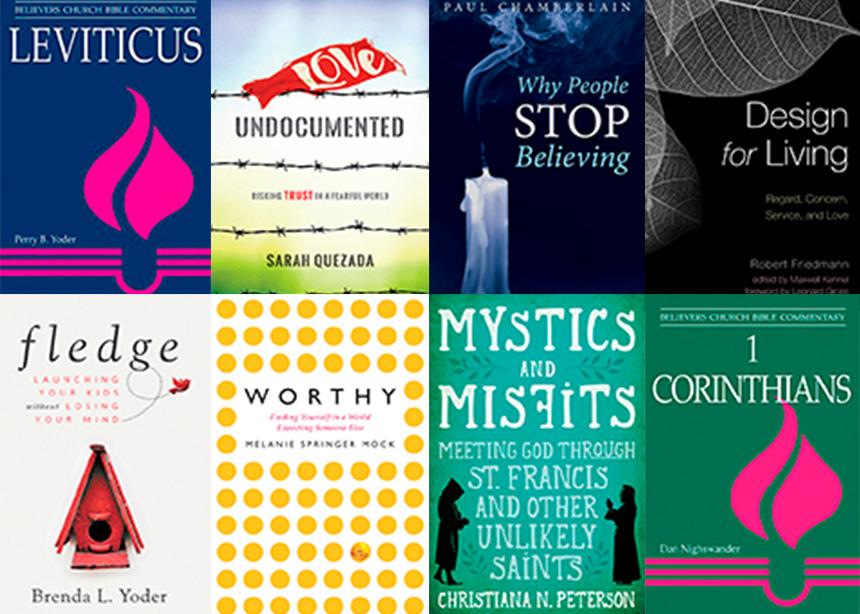 I Corinthians: Believers Church Bible Commentary. Dan Nighswander. Herald Press, 2017, 403 pages.
Like other commentary writers in this series, Nighswander provides explanatory notes as well as describing the text in the biblical context and in the life of the church. He also points out which parts of I Corinthians do not appear in the Revised Common Lectionary. A group study guide is also available.

Design for Living: Regard, Concern, Service and Love. Robert Friedmann. Maxwell Kennel, ed. Wipf and Stock, 2017, 200 pages.
Robert Friedmann, known for his theological interpretation of Anabaptism, died in 1970. Believing that his unpublished manuscript from 1954 was relevant for today, Maxwell Kennel has now brought it to publication. The book explores the meaning of life using a philosophical framework to describe discipleship. The foreword is written by Leonard Gross.

Education with the Grain of the Universe: A Peaceable Vision for the Future of Mennonite Schools, Colleges and Universities. J. Denny Weaver, ed., Cascadia Publishing House, 2017, 360 pages.
This collection of essays is Vol. 11 of the C. Henry Smith series. Among the 18 contributors who reflect on the intersection of educational theory and practice and Mennonite thought and peacemaking is Lowell Ewert of Conrad Grebel University College. The foreword is written by Susan Schultz Huxman.

Going Global with God as Mennonites for the 21st Century. Walter Sawatsky. Bethel College, North Newton, Kan., 2018.
This book includes four lectures delivered at Bethel College as part of the Menno Simons Lectures in October 2014. Beginning with the Russian Mennonite experience in the 20th century, Sawatsky reflects on the global Mennonite experience. Sawatsky taught church history and mission at Anabaptist Mennonite Biblical Seminary (AMBS) before his retirement in 2012.

Leviticus: Believers Church Bible Commentary. Perry B. Yoder. Herald Press, 2017, 344 pages.
Now retired, Perry Yoder taught Old Testament at AMBS for 20 years. He believes that the worship rituals described in Leviticus are important because they teach us about God and how to be God’s people. They also help us understand the New Testament.

Life at the End of Us Versus Them: Cross Culture Stories. Marcus Peter Rempel. Privately published, 2017, 318 pages.
Although this book includes many philosophical and theological references, Rempel uses easy-to-read stories to reflect on what it means to be a Christian in today’s world. He is refreshingly honest in his critique of modern culture and the future of the church. A discussion guide is also available.

Mystics and Misfits: Meeting God Through St. Francis and Other Unlikely Saints. Christiana N. Peterson. Herald Press, 2018, 263 pages.
Peterson weaves together reflections on St. Francis and mysticism with her experience of living in an intentional Mennonite community at Plow Creek in Illinois. As a mother with young children, she ponders her emotions as the community struggles to thrive. It is an interesting perspective on the Plow Creek community, which closed at the end of 2017.

Reflections on Science, Religion and Society: A Medical Perspective. Joseph B. Martin. Privately published with Friesen Press, 2017, 195 pages.
The author, who grew up in Alberta, retired from the faculty of Harvard Medical School in 2016. He has put together a collection of presentations he made to schools, churches and hospitals over many years, reflecting on the interconnection of faith and science.

The Upside-Down Kingdom: Anniversary Edition. Donald B. Kraybill. Herald Press, 2018, 320 pages.
This book, describing the radical aspect of Jesus’ teachings, was first published in 1978, and re-issued in 1990, 2003 and 2011. This is an updated and revised 40th-anniversary edition. The book has been widely read and has been translated into seven languages. Discussion questions for each of the 12 chapters are included.

Why People Stop Believing. Paul Chamberlain. Cascade Books, 2018, 210 pages.
Chamberlain, director of the Institute for Christian Apologetics at Trinity Western University, provides rational arguments in defence of the existence of God and the authority of the New Testament. He carefully examines various arguments given by atheists and explains why they are inadequate.

Along the Road to Freedom: Mennonite Women of Courage and Faith. Ray Dirks. CMU Press and MHC Gallery, 2017, 132 pages, full colour, hard cover.
This book includes 26 full-page prints of Ray Dirks’s paintings that made up the exhi-bition of the same name. As well as the story of each of the featured women, Dirks gives an account of his journey with each painting and the sponsoring family.

Eastern Mennonite University: A Century of Countercultural Education. Donald B. Kraybill. Penn State Press, 2017, 424 pages.
This 100-year history of Eastern Mennonite University (EMU) includes the story of the relationship of the school and the denomination through the years. Kraybill, who is a 1967 graduate, has written many books and is known for his expertise in Amish studies.

Making a Difference in the Journey: The Geography of our Faith. Nancy V. Lee, ed., Cascadia Publishing House, 2017.
This is the fourth volume of a series of memoirs put together by the Anabaptist Center for Religion and Society based at EMU in Harrisonburg, Va. Among the 15 writers who reflect on how their life journeys have made a difference in integrating faith, life and Mennonite thought is Dick Benner, a former editor of Canadian Mennonite.

Re-Envisioning Service: The Geography of our Faith. Ray Gingerich and Pat Hostetter Martin, eds. Cascadia Publishing House, 2016, 404 pages.
Vol. 3 of the Anabaptist Center for Religion and Society collection includes memoirs from a variety of Church of the Brethren and Mennonite educators, editors, service workers and peacebuilders. Although most are well-known, only Margaret Jantzi Foth was born in Canada.

The Exceptional Vera Good: A Life Beyond the Polka Dot Door. Nancy Silcox. CMU Press, 2017, 264 pages.
Born in 1915 near Waterloo, Ont., Vera Good did not have a traditional life as a Mennonite wife and mother. She pursued higher education and spent time in India doing voluntary service. She became a school inspector and worked for TVOntario in its early years.

The Quiet in the Land. Richard Toews. Self-published, 2017, 239 pages.
This historical novel is set in 1917 and includes the story of the Russian Revolution. Johann Toews, son of a Mennonite pastor, reflects on the contradictions between what the Mennonite church was teaching and its actions, and he considers joining the revolutionaries.

Fledge: Launching Your Kids Without Losing Your Mind. Brenda L. Yoder. Herald Press, 2017, 240 pages.
Using examples from her own parenting experience, the author examines the joys and pitfalls of caring for teenagers and older children. She expresses her own struggles with a potential empty nest. Each of the many short chapters ends with a prayer and questions for reflection.

Love Undocumented: Risking Trust in a Fearful World. Sarah Quezada. Herald Press, 2017, 196 pages.
The author explores the experience of those who live in the United States without legal documentation, comparing their situations to those of biblical characters. She exposes some of the injustices they experience. She speaks from a personal perspective as she dates, falls in love with, and marries someone who is undocumented.

Worthy: Finding Yourself in a World Expecting Someone Else. Melanie Springer Mock. Herald Press, 2018, 220 pages.
Using many personal anecdotes, the writer reflects on the numerous times throughout her life when she felt unworthy, including in the church. She advocates for accepting people as they are without judgment. Church book clubs should find this book eliciting lots of conversation.

Peace Lab: Discover God’s Way of Peace. MennoMedia. 2018, boxed set.
This year’s five-day Vacation Bible School curriculum explores ways of peace. It is again Bible-based and flexible to be used for a variety of ages. Each day’s theme is centred on a Bible story and comes with many suggestions for songs, activities, games, worship and drama.

Many of the featured titles on the book list are available for purchase or to borrow from CommonWord Book Store and Resource Centre in Winnipeg. For more information, visit commonword.ca or call 1-877-846-1593. 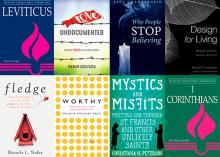