Spiritual snapshots of the U.K. and Africa 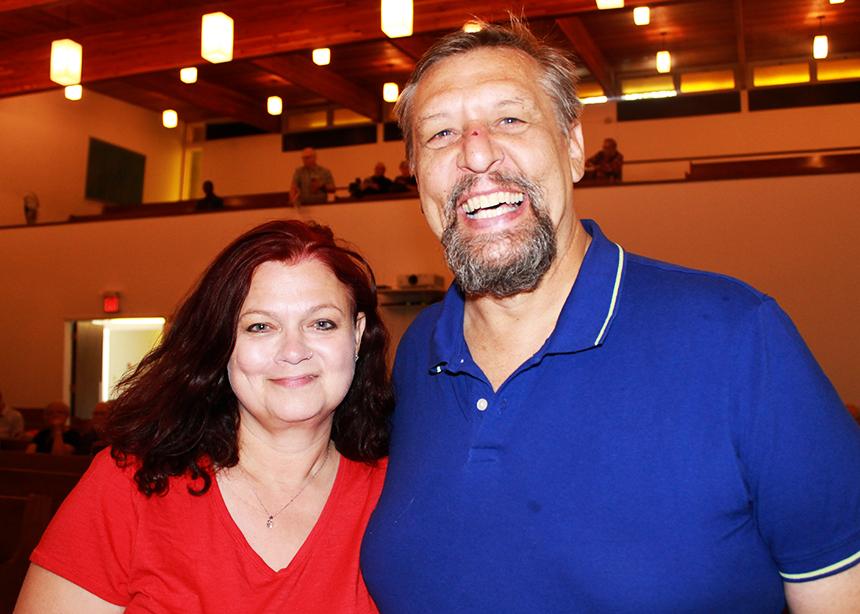 Cheryl and Mike Nimz have been Mennonite Church Canada Witness workers in the United Kingdom for five years. After itinerating in Canada for two-and-a-half months, they have returned to Birmingham, England, to continue their assignment. (Photo by Donita Wiebe-Neufeld)

Mike and Cheryl Nimz do not fit typical missionary scenarios, but neither does their mission field conform to stereotypes. As Mennonite Church Canada Witness workers living in Birmingham, England, since 2013, their assignment is to nurture Christian groups in a post-Christendom urban setting as part of an emerging Anabaptist Network of Communities.

Mike credits Alan and Eleanor Kreider, former directors of the London Mennonite Centre, for doing excellent groundwork that they are now able to follow up as they seek to build the church in new ways for new generations.

Speaking at Lendrum Mennonite Brethren Church in Edmonton on July 15, 2018, Cheryl described young people in the U.K. as “feeling disconnected from church and each other,” yet very interested in faith and what it means.

On Monday nights, the Nimzes participate in a “peace meal” that meets alternately in five different homes. Young adults gather for a potluck meal, a half-hour of worship that they take turns leading, and a time of sharing about the daily living out of faith. The group is diverse, with Methodists, Anglicans, Mennonites, Quakers and sometimes atheists/agnostics coming together for discussion. Cheryl said they are getting requests to help set up more “peace meal” groups.

On Tuesday nights, the couple are a part of a “working at theology” group. For the first hour they just talk and, as Mikes puts it, “fix the world.” After this opening, participants look at the Bible and theological topics. “It is a good place for some people who were ‘done’ with the church,” Mike said.

A big question the Nimzes face in the U.K. is, “What is the purpose of the church?” The question is asked as people recognize the need for faith community at the same time as they have rejected the institutional church of the past. The couple reports experiencing an excitement among those who hear about Anabaptism, and there are people wanting to be a part of the Mennonite faith.

The Nimzes will soon be working with a few people to explore starting Mennonite churches in the U.K.

During their two-and-a-half months in Canada, the couple visited churches in Manitoba and Alberta, and attended the Mennonite Church Eastern Canada annual meeting. They returned to the U.K. in mid-July.

Like other MC Canada Witness workers, they now have a three-year window in which to transition into a 50-percent relational funding model, with half of their support coming from regional churches, congregations, and individuals, while the other half will be funded by the central budget of MC Canada. On July 22, 2018, a service celebrating the long-term Witness work of Lillian (Haas) and Norm Nicolson in Burkina Faso was held at Holyrood Mennonite Church in Edmonton.

Lillian began literacy work in Burkina Faso in 1999; six years later, after the program was mostly operating on its own, she switched to helping with the already-running Bible translation program. After their marriage, Norm joined the work, and in 2008 he began doing audio recordings, then soon switched to teaching trades to the locals..

In her July 22 sermon at Holyrood, Lillian said an important question they discuss with local people is, “Who is God?” Their village is largely Muslim, infused with animistic traditions and beliefs that include revering ancestors and using fetishes and amulets for protection. God is viewed as distant, and there is a belief in fate rather than free will, resulting in a problematic idea that human actions do not matter. The locals are familiar with Old Testament stories and, in many ways, their culture is similar to what is found in them.

“In Africa, everyone knows that God exists,” said Lillian. She says a new thing Christian biblical interpretation brings into this culture is the idea that people are made in God’s image, and God is loving and in relationship with them. This means their actions matter, and that repentance and forgiveness heal relationships, and grace and truth come through following Jesus. “The western world can hardly relate [to the cultural context in Burkina Faso]”, she said.

The Nicolsons rely on the retelling and interpretation of biblical stories into the local language in their teaching. “The stories never grow old. God’s character is revealed [in them],” she preached.

She works to bring the biblical message to people in their own language and cultural context so they can understand, she said, emphasizing that good translation work is more than “word for word” interpretation. It is using appropriate words and concepts to make sure the meaning of the stories comes through in the language and culture of the recipients.

In a slide show after the service, Norm showed pictures of a mud-brick vault construction of a school that was built specifically for their children. The techniques are ancient and uniquely suited to the area. Materials are inexpensive and locally sourced. The half-metre thick walls and ceiling keep the building cool when the sun beats down, and they hold warmth when the weather is cold. Local builders were involved in order to learn the technique.

The Nicolsons had hoped for a one-year sabbatical in Canada before a planned return to Burkina Faso. The restructuring of MC Canada and a review of Witness projects, however, has ended their Witness term support. While they will still spend a year in Canada, they have added searching for a new partnering organization to their plans in hopes of facilitating a return to ministry in their Burkinabé village. 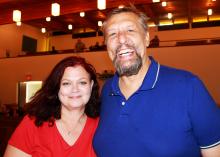 Cheryl and Mike Nimz have been Mennonite Church Canada Witness workers in the United Kingdom for five years. After itinerating in Canada for two-and-a-half months, they have returned to Birmingham, England, to continue their assignment. (Photo by Donita Wiebe-Neufeld) 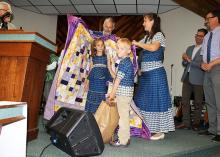 Norm and Lillian Nicolson and their children Kenneth and Nadine have returned to Canada after many years in Burkina Faso. A celebration of their ministry was held at Edmonton’s Holyrood Mennonite Church on July 22, 2018. Mennonite Church Alberta presented each family member with a quilt as a ‘warm welcome’ to Canada. (Photo by Donita Wiebe-Neufeld)