Within the last seven months, nearly 1,000 people have been killed in the cycle of attacks, according to the United Nations. 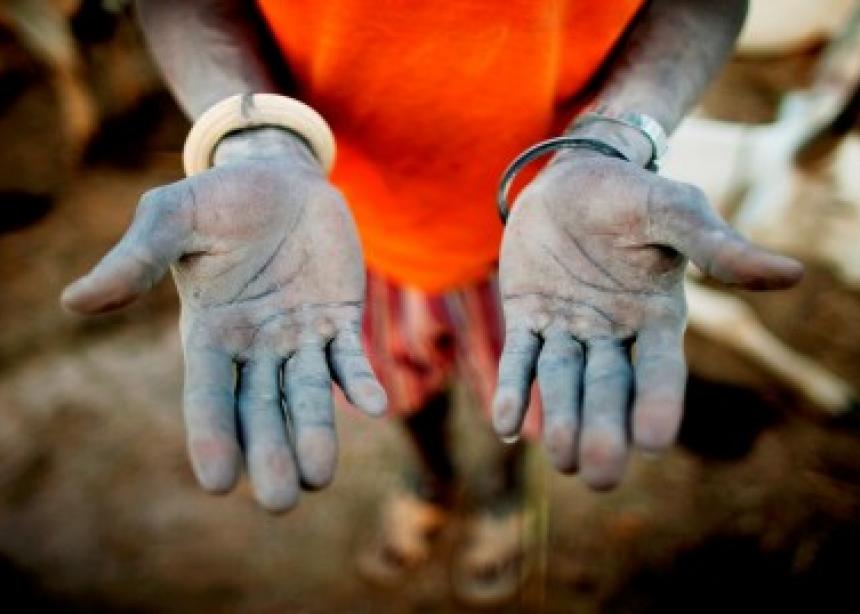 The hands of a cattle-herder. --Photo by Peter Muller of Safer World

The assistance is targeting nearly 60,000 people in Jonglei State where a cycle of violence between two pastoralist communities is continuing. The Lou-Nuer and the Murle have a history of raiding each other's cattle, women and children, but Christian leaders want the communities to give up arms.

"I urge the government to disarm the two communities (whose members posses illegal arms), simultaneously. The action should also be extended to other armed communities in the state," Anglican Bishop Alapayo Manyang Kuctiel of Rumbek told ENInews in a telephone interview from South Sudan on 16 January. South Sudan was declared independent on July 9, 2011.

The new round of violence started in late December after an estimated 6,000 fighters from the LouˆNuer charged through Pibor County in Jonglei State, killing hundreds of people from the Murle community. Since then, the Murle have staged a series of revenge attacks. By January 13, the government estimated that nearly 100 people had been killed in reprisal attacks. Within the last seven months, nearly 1,000 people have been killed in the cycle of attacks, according to the United Nations.

With tensions escalating in the state and civilians fleeing their homes, the government declared the state a disaster zone on 5 January. It appealed to international relief agencies to provide humanitarian assistance to the affected population. In response, the UN has mounted a massive humanitarian operation to aid the people said to be living in the bush.

"It is extremely difficult to reach these people as there are virtually no roads or airstrips. They will be lacking even the most basic supplies and services," Arie Den Toom, the Lutheran World Federation (LWF) South Sudan country representative, said in a statement on January 13.

The LWF, alongside the UN agencies, is delivering non-food items, with medical supplies being provided in a hospital in the city of Juba. The group is working with other members of the ACT (Action by Churches Together) Alliance that include Norwegian Church Aid and the Sudan Council of Churches.

"The people of Jonglei must be supported quickly -- to end violence, protect civilians and provide humanitarian assistance even in the most remote area where access proves difficult," said John Nduna, ACT Alliance general secretary.

Leaders are now voicing concerns that the cattle raids are threatening stability in the new nation. The clergy, who had endured decades of civil war, had welcomed the new government as a "dawn of hope."

The hands of a cattle-herder. --Photo by Peter Muller of Safer World