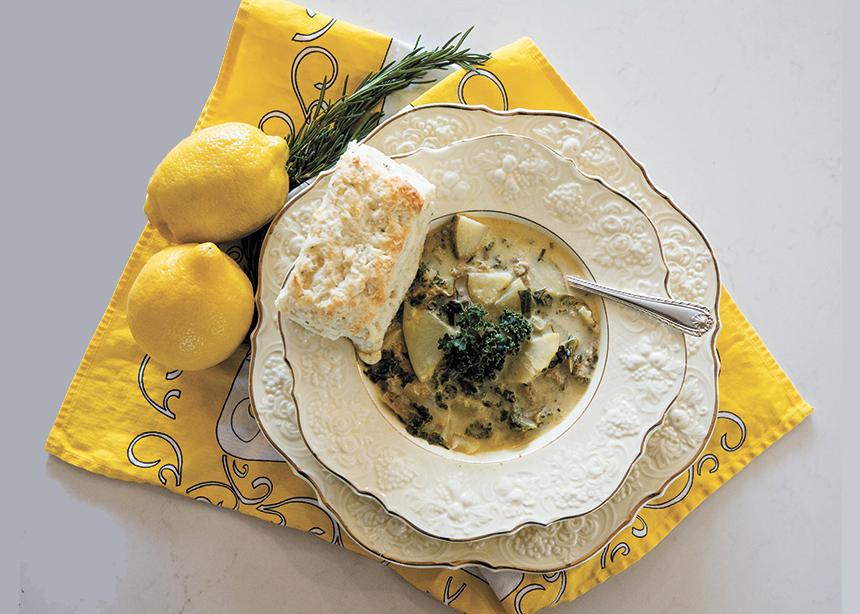 Many participants at the MC B.C. Women’s Day on May 1 enjoyed a lunch of soup and biscuits, prepared together as guided online by Chef Dez. (Photo by Jane Grunau)

Women of Mennonite Church B.C. couldn’t meet in person for the annual B.C. Women’s Day on May 1, but they could still see each other’s faces, enjoy fellowship and eat the same lunch.

This year’s event was held on Zoom, with 67 participants from 12 cities in B.C. tuning in along with some from Alberta, Saskatchewan, Manitoba, Ontario, New York and California.

Some traditions continued: Women from B.C. Mennonite congregations who had passed away since the last Women’s Day—this time covering two years, since no event was held in 2020—were honoured and remembered with a photo tribute. Cheryl Heinrichs of Living Hope Christian Fellowship led singing, and an offering project was suggested for Camp Squeah.

Anne Herridge, a poet and devotional writer who attends Crossroads Community Church, read several of her original poems. Originally from England, Herridge shared a poem she wrote following the recent death of Prince Phillip, the Duke of Edinburgh, who, she noted, was always at the side of the Queen, holding her hand. “God is holding us in his palm; we have our own royal consort in God,” she said.

Christian comedian Sara Weber of Hamilton, Ont., entertained the group with her “Mothers in a dangerous time” monologue, her humorous take on life and current events. Referring to I Corinthians 1:4, a verse that encourages thankfulness, she urged her audience to remember, “This is not the end of the story.”

Participants discovered that one advantage of staying in their homes and kitchens was being able to prepare the same lunch at the same time, just in time for the noon meal. Recipes were mailed to participants ahead of time for a cooking segment featuring Tuscan soup and rosemary parmesan biscuits from local Fraser Valley Chef Dez, a.k.a. Gordon Desormeaux.

Comments afterwards expressed appreciation for Janette Thiessen for organizing an event that was creative and with a variety of segments that appealed to all ages.

“I appreciated how well the event was organized and thoughtfully planned,” said Jane Grunau, who attends Langley Mennonite Fellowship. “The poetry and music combination created by Anne Herridge and Cheryl Heinrichs was meaningful, thought-provoking, and provided a spiritual emphasis to begin the morning. Sara Weber was humorous, but also reflective. Chef Dez’s lighthearted but informative cooking class was a perfect [and delicious] ending. [Many] thanks to Janette for facilitating this morning of community.” 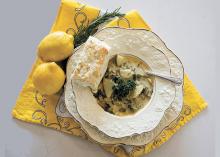 Many participants at the MC B.C. Women’s Day on May 1 enjoyed a lunch of soup and biscuits, prepared together as guided online by Chef Dez. (Photo by Jane Grunau)

is there a recipe to go along with the story?

Hi Walter. There is no recipe to go along with this article, but look for the next installment in our Gathering Around the Table story/recipe series this summer.