Meet the hosts of Gathering 2022 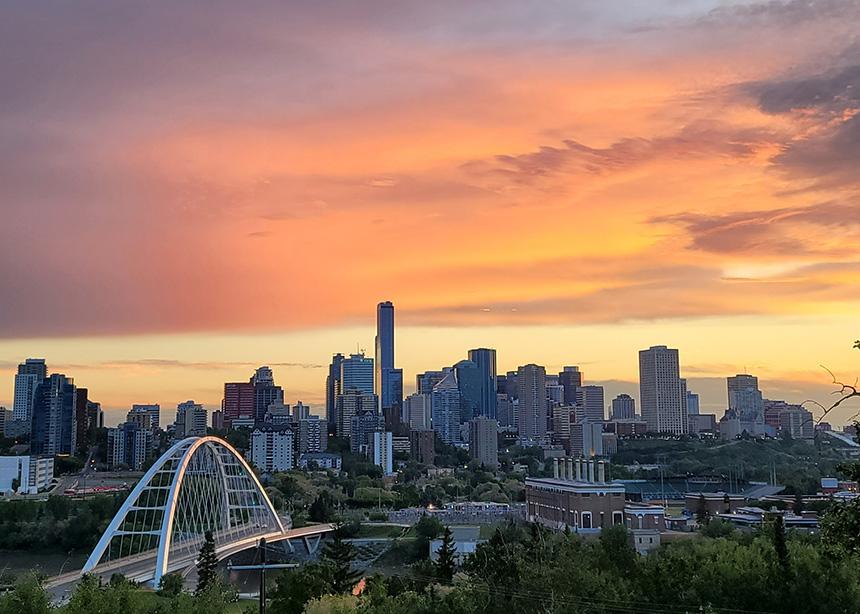 As Mennonite Church Alberta prepares to host the MC Canada national gathering from July 29 to Aug. 1, it is fascinating to consider how a small regional church body affects the flow of city life in Edmonton, its development and the surprises and challenges that emerge. (Photo by Len Franz)

You are easily forgiven for not knowing that Edmonton is a beach city. In spite of its northern location and prairie landscape, sandcastles and sunbathers began appearing along a bank of the North Saskatchewan river in 2017.

This so-called Accidental Beach emerged when upstream construction subtly changed the waterflow, exposing and enlarging a beautiful sand bar. Ever since then, crowds flock to the area to enjoy the sun and sand.

The surprising new recreation option is wonderful; however, it also creates parking, garbage and hygiene challenges that need to be overcome. It’s fascinating to see the possibilities and challenges that a small change upstream has created, and to ponder what the future might have in store when the waters change again.

Accidental Beach is a useful local metaphor for describing the five Mennonite Church Alberta congregations currently active in Edmonton. As Mennonite Church Alberta prepares to host the MC Canada national gathering from July 29 to Aug. 1, it is fascinating to consider how a small regional church body affects the flow of city life, its development and the surprises and challenges that emerge.

In the early 1950s, young, rural Mennonites began moving to the city for education and work. Bible study and discussion groups formed in homes, and new urban Mennonite congregations began to grow in Edmonton.

While all three functioned on their own, the overall Mennonite presence in Edmonton was small, and working together often made sense. The churches have a long history of co-operation. They have shared a ministerial group, worked together with Mennonite Central Committee (MCC) on various projects, and held joint Good Friday services. This co-operation increased the ability of Mennonites to have an impact beyond what might be expected.

A good example of how these few churches have shaped the city is the existence of the Edmonton Mennonite Centre for Newcomers. The organization, now well known, is a go-to source for news media whenever there are stories about refugee resettlement and related issues.

The centre began when Mennonites saw, and responded to, the wave of Vietnamese, Laotian and Cambodian refugees fleeing war in the late 1970s. Many of those who responded were first- or second-generation immigrants themselves, and family stories of loss and struggle informed their compassionate response.

From an initial full-time staff complement of 1.5 in 1980, the centre now has a staff of approximately 230 people working to assist up to 17,000 newcomers each year. The organization provides language training, job skills, and other resettlement services. While it still retains the Mennonite name and representation on its board, it is now largely government funded and operated.

Another project with surprising results is the North Edmonton Ministry. Spearheaded by MC Alberta and supported by MCC Alberta, the project aimed to build bridges between Christians (mostly Mennonites) and Muslims through the 2010s.

Donna Entz was hired to lead the work. Through personal relationships she and her husband Lorne built in the community and through spearheading interfaith dialogue events, trust grew between Mennonite and Muslim leaders.

When the 2016 Syrian crisis hit, Mennonites and Muslims in Edmonton were ready and able to work well together to provide a warm welcome for the refugees. Since then, similar interfaith dialogues have begun in Calgary.

In 2021, MC Alberta decided to continue the work, hiring Suzanne Gross to explore the possibilities of what this might look like into a new decade.

There have been many other significant projects through the years, including introducing the fair trade movement to Edmonton through Ten Thousand Villages (now Village Goods), restorative justice work with young offenders, prison visitation, support for families of prisoners, an MCC Thrift store, and recycling initiatives.

Some projects have come and gone, while others have adapted to changing levels of support from both churches and governments. In addition, there are many significant but less measurable contributions made to the city by MC Alberta churches.

Adela Wedler, a lay leader at First Mennonite Church, writes: “We are involved in various Edmonton projects such as the Mustard Seed (providing meals), and Meals on Wheels (a pickup depot). We are a place where a local Christian [Alcoholics Anonymous] group meets, and we run a not-for-profit day care. Providing worship at a rehab hospital. Our welcoming presence is becoming more known and we hope to provide a place where everyone feels comfortable and welcome to worship!”

Mennonite churches are a source of many volunteers whose contributions to the city are difficult to quantify.

The Edmonton Christian Life Community Church, for example, has played an important role in helping Cantonese speakers adjust and adapt to Edmonton. Teaching English through the use of Bible stories, and computer classes are just two of the services the church has gifted to the city.

The changing face of MC Alberta in Edmonton

The face of MC Alberta in Edmonton is, like the river that flows through it, dynamic and always changing. Congregations have come and gone, such as Faith Mennonite (1980-1996) and the Vietnamese Mennonite Church (1995-2017).

In the last 10 years, three of the five churches in the city have become predominantly African. Sunday worship services are conducted in Nuer, Amharic, Cantonese and English.

Executive minister Tim Wiebe-Neufeld says that he likes to relate to these different groups and experience their perspectives on faith. “People newer to the Mennonite faith, or who choose it, remind me about what is exciting and important about my faith.”

The struggles faced by newcomer churches today echo issues that faced the original Mennonite churches. Recent family stories of forced migration and trauma, urbanization and increased education of the younger generations, adapting to a new culture, and language of worship, are all live issues alongside the difficulties of resettlement.

Being a peace church in the recent aftermath of war is an important consideration for MC Alberta’s newest churches.

When South Sudanese Mennonite Church joined the regional church, it clearly stated a desire to be a peace church and to help others. Past experiences with MCC and the work of the newcomers centre were important in their decision to join MC Alberta.

Another issue shared across the years is concern for youth and the effective passing on of faith through the generations amidst change.

Pastor Mezgebu Tucho of the Bethel International Oromo Congregation, told Wiebe-Neufeld that it is difficult for the adults to know how to speak to youth about faith because the North American context and culture is different from what it was in Ethiopia.

Pastor Rueben Tut of the South Sudanese Mennonite Church says his church is young and energetic. In contrast to the aging and shrinking established congregations, the Tut’s congregation has large families and many young people. When the church joined MC Alberta, he says they were “looking for where we can worship, looking for a [church] to be a part of something.”

The synergies and opportunities that exist between Edmonton’s established churches and new congregations seem obvious, and the contributions to the city continue to change and grow.

Holyrood Mennonite church has evolved into a largely Liberian congregation. Interim pastor Patrick Kukanu says: “Because Edmonton is growing diversely, the experience of Holyrood is valuable in sharing light on cross-cultural engagements—the strengths and challenges.”

In light of a few difficult years, lay leader Margot Brunn is hopeful for the congregation’s future, saying; “Over the years, many members who had been displaced by war and discrimination enriched its worship and prayerful sharing. The tree of Holyrood has deep roots, ready to support a congregational renewal after the pandemic drought.”

Tut emphasizes the need for the extended Mennonite church family to put effort into developing and keeping relationships with each other strong. He wants other MC Canada churches to know that South Sudanese Mennonite Church is part of them. “We are Mennonite and part of the family of Mennonites. We want to have strong connections with MC Canada.”

Like the construction that created Accidental Beach, Mennonites have, and will continue to have, a surprising and ever changing influence on the character of the city of Edmonton.

The Mennonites of Edmonton will host the nationwide church at Gathering 2022 on July 29 to Aug. 1. Camp Valaqua, in Water Valley, will host youth for Amplify! July 31 to Aug. 4. To view an invitational video, go to bit.ly/3uSFB4u. Registration for both events opened on April 13. For more information, visit mennonitechurch.ca/gathering2022 and mennonitechurch.ca/amplify.

A few facts about Edmonton 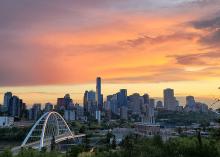 As Mennonite Church Alberta prepares to host the MC Canada national gathering from July 29 to Aug. 1, it is fascinating to consider how a small regional church body affects the flow of city life in Edmonton, its development and the surprises and challenges that emerge. (Photo by Len Franz) 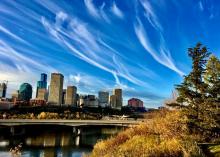 The face of Mennonite Church Alberta in Edmonton is like the river that flows through it, dynamic and always changing. Congregations have come and gone, such as Faith Mennonite (1980-1996) and the Vietnamese Mennonite Church (1995-2017). In the last 10 years, three of the five churches in the city have become predominantly African. (Photo by Len Franz) 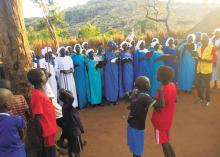 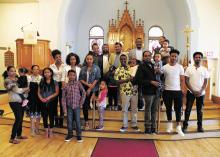