A small effort is ‘making a difference’ 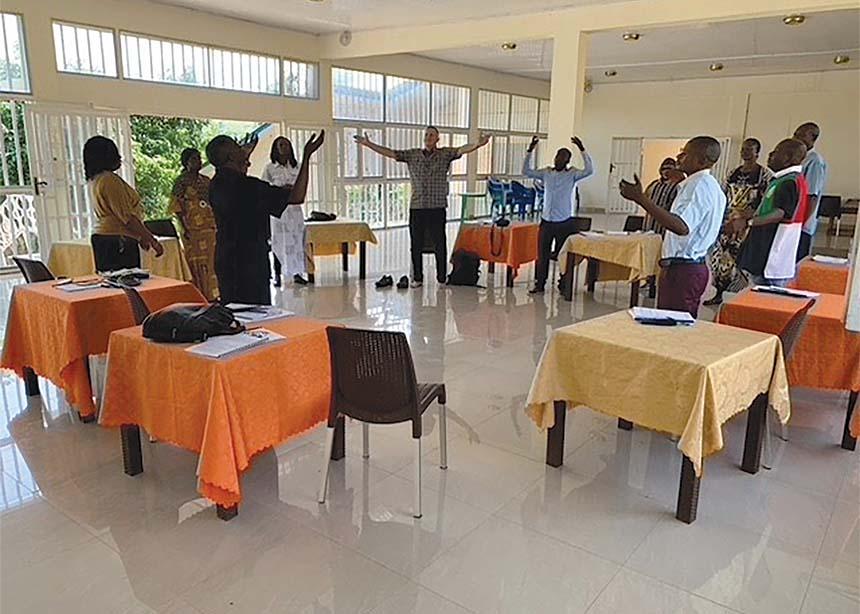 ‘Whether stretching our bodies for fitness, or stretching our spirits in worship, we experienced the empowering sabbath rest of God as we pulled “away from the crowds” for this short time,’ says Rudy Dirks. (Photo courtesy of Rudy Dirks)

Travelling from Canada to meet with Congolese and Angolan church leaders in Africa, Rudy Dirks is struck not by the cultural, social and economic differences between himself and those he meets, but rather their similarities.

“We are trying to navigate ourselves through a complex world, trying to do the best for our families, facing spiritual, emotional and relational challenges,” he says. “I feel humbled as I listen to my African colleagues. The beauty of this work is that we are all learning from each other what it means to follow Jesus faithfully, trust God more deeply and walk by the Spirit more closely.”

Dirks, a former Mennonite Church Canada Witness worker in Botswana from 1996 to 2003, is a leader in the Africa Leadership Coaching Network, made up of small groups of community leaders in the Democratic Republic of the Congo (DRC) and Angola who gather online to share and learn every two weeks via WhatsApp.

In October, Dirks travelled to the Congo to meet with the network, the first in-person meeting since the pandemic began.

The network, supported by Africa Inter-Mennonite Mission (AIMM), evolved from the Congo Leadership Network, an initiative that Charles Buller, Dirks’s friend and colleague from Goshen, Ind., began in 2014 to provide resources for Congolese leaders and their communities.

Missionary kids who grew up together in Kinshasa, the capital of the DRC in the 1960s and ’70s, Dirks and Buller are passionate about giving back to the land and people that were once a part of their childhood home.

Feeling called to join Buller in his work, in 2019 Dirks visited Kinshasa to meet with Buller and Congolese network members for a leadership seminar at the Kimwenza retreat centre. They then flew to Angola with two Congolese team members, Leonard and Antoinette Kiswangi, to help lead seminars in Dundo. Two hundred people came, and another 70 visited a second seminar held in Luanda.

Fast-forward to 2021, 18 months into a global pandemic, and the program has gone virtual.

Over the past year, the network has begun a three-year Leadership Coaching Certificate Program for the Angola Learning Group that Dirks participates in, and the Congo Learning Group led by Buller.

In October, Dirks and Buller met with nine leaders from the two learning groups.

“We met to share our experiences of personal growth as we learn to lead according to the model of Jesus, empowered by the Spirit and growing into the image of God,” says Dirks.

Dwelling on Psalm 84 each day, the group shared how their training has impacted members’ personal lives, marriages, families and communities. There was also a time to review, as the program moves into its second year of virtual bimonthly meetings.

One memorable moment for Dirks was when network member Maria Gomes sang a song she wrote as an act of worship and love to God, called “Sois Loué” (“Be Praised”).

“After a couple of rounds the others joined in,” says Dirks. “For 15 minutes we heard the same song, sung from our hearts, in French, Portuguese, Lingala, and Tshiluba. In a profound moment, our hearts were knit together with each other and God through music, words and different languages.”

Dirks stresses the need for MC Canada’s ongoing support of the leadership coaching program through its support of AIMM. Not only does MC Canada have a 100-year legacy of partnership with Congolese churches through AIMM, leaders and communities, he says, but an overall removal from the region of North American Mennonite workers in recent decades has meant a lack of cross-cultural engagement that is sorely missed by the Congolese.

“With few resources available, church and community leadership is faltering and struggling with the huge demands of communities experiencing poverty, trauma from war and divided due to unstable governance,” says Dirks.

“This leadership network is a small drop in the ocean of need, but it is bearing tangible fruit in continued partnerships in the kingdom, spiritual friendships and the development of leaders who lead from the heart,” he says.

Dirks says that the expansion of the leadership coaching program in Angola is evidence that “this small effort is making a difference.”

Tany Warkentin, MC Canada’s liaison for ministry in Africa, agrees. She says a new leader elected to lead one of Angola’s Mennonite conferences, Daniel Canganguela, has the support he needs because of the Leadership Network.

“Rudy’s training helps build up key church leaders like Daniel and empowers them to use Christlike leadership styles in all aspects of their family, church and community involvements,” she says.

For more information on the Leadership Network, visit mennonitechurch.ca/AIMM. 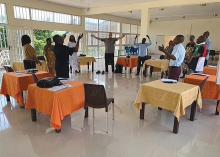 ‘Whether stretching our bodies for fitness, or stretching our spirits in worship, we experienced the empowering sabbath rest of God as we pulled “away from the crowds” for this short time,’ says Rudy Dirks. (Photo courtesy of Rudy Dirks) 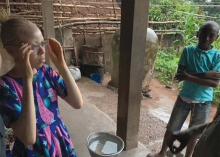 Abigail is the niece of the key leadership couple, Leonard and Antoinette Kiswangi. Through the help of some friends in Canada, it was possible to get her special eyeglasses for her unique optical needs. (Photo courtesy of Rudy Dirks) 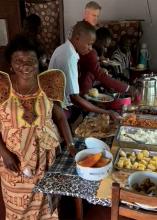 Mama Germain, the wife of a Mennonite pastor in Kikwit, prepared one main meal each day for the leadership coaching group that came to her home every afternoon. (Photo courtesy of Rudy Dirks)