The skill and soul of listening 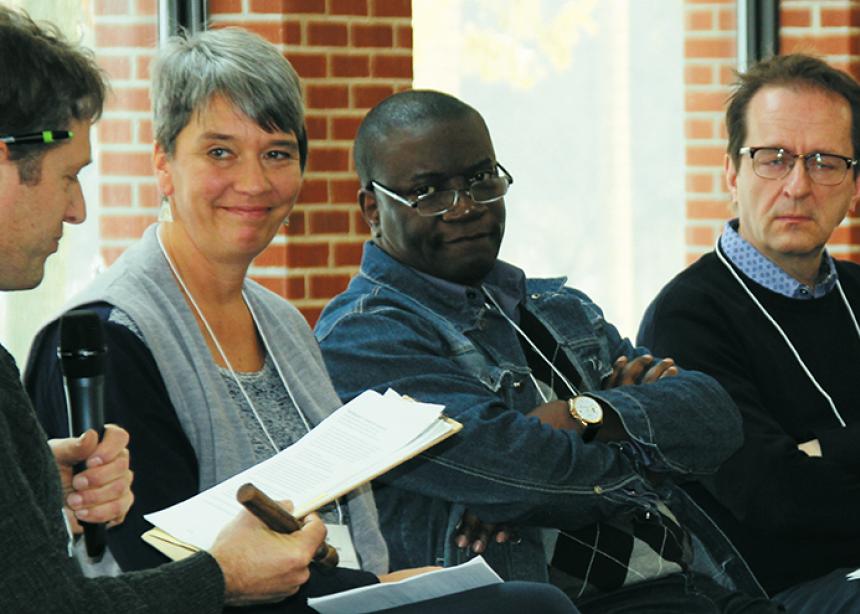 Listening to God in worship, contemplatively in a labyrinth, or in the Bible. Listening to each other across cultures, when your hearing is impaired or when with the elderly.

The morning panel of three pastors focussed on “listening with a pastoral ear.”

Tanya Dyck Steinmann of East Zorra Mennonite Church near Tavistock spoke about listening as a spiritual posture more than a skill or strategy, as a muscle to train and then use, and as a posture of alertness. For her, listening means being aware of her head, her heart and her gut (her physical responses while with another person).

Roberson Mbayamvula of Hagerman Mennonite Church in Markham and a regional minister associate in the regional church, spoke of a Congolese proverb, noting that people have “two ears but only one mouth [so] listen and listen again.” “Listening is a form of love. We put aside our own agenda and give attention to the other,” he said, adding that listening is about “selflessness and humility.”

Jim Loepp Thiessen, interim minister at North Leamington United Mennonite Church, spoke more about listening in discernment. He tells a few people about a situation he is involved in, asking them to seek God’s guidance. No names and few details are given. The people are to listen for any prompting. From those situations, he said that many times they have given him advice he could bring to the situation that proved very helpful.

The afternoon panel focussed on “listening with a congregational ear,” during which non-pastoral leaders shared their thoughts and ideas.

Willie Taves of Faith Mennonite Church in Leamington noted that by classifying decision-making and listening to each other as a form of worship the congregation had successfully dealt with a number of difficult questions, including the Being a Faithful Church process and a question about whether to sponsor a Christian or a non-Christian Syrian family. Honest tensions and open conversation had characterized both processes, he said.

Vic Krahn of Erb Street Mennonite Church in Waterloo noted that voting is a form of listening, as is consensus decision-making. He said the congregation sometimes votes on a matter, sometimes not; if no agreement seems to arise, then the question is left to a later time. “True listening does not know what the result will be,” he said.

Josie Winterfeld, the peace and justice and outreach worker at Stirling Avenue Mennonite Church in Kitchener, spoke about listening to the Spirit of God in the Word of God, in the church or outside of it. In the last of these, she focussed on listening to Indigenous people through their stories in order to learn how God is calling the church to new ways of being in relationship with them.

Among the workshops offered, Timothy Li-Hui Tang’s on “intercultural listening” was full both times it was offered. Tang, the associate director of the Tyndale Intercultural Centre in Toronto, explained that intercultural learning moves from denial that there is difference; through polarization, where “my” and “our” way is right; to minimization, where difference is seen as unimportant; to acceptance, which comprehends difference; and finally to adaptation, which bridges across difference, knowing that sometimes one culture and group has ideas and solutions the other needs.

The event was part of the Anabaptist Learning Workshop, a joint program of Conrad Grebel University College and MC Eastern Canada.

Laura Enns, coordinator of worship and neighbourhood engagement at Waterloo-Kitchener United Mennonite Church, leads her seminar group in an exercise of wondering who is speaking to whom at various points in a worship service. (Photo by Dave Rogalsky)