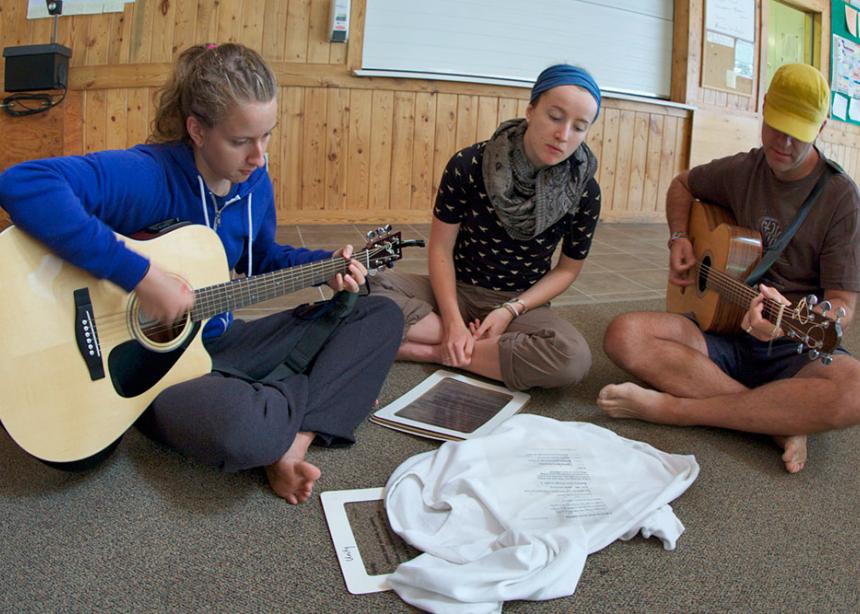 When children arrive at Mennonite Church Manitoba’s (MCM) three camps this summer, they will have a new tune to learn. “This Ground” is a simple, catchy, four-chord song—and it was written by current and former staff of MCM’s camping ministry, Camps with Meaning (CWM).

Darryl Neustaedter Barg, associate director of communications at MCM, led a handful of musicians in creating the song during two writing sessions at Camp Assiniboia this past May. The song was inspired by CWM’s 2015 theme and curriculum, “Knowing God,” which is based on the Lord’s Prayer.

It’s the 16th year that CWM has written new music for its camps. The songwriting sessions arose out of conversations by CWM staff in the late ‘90s who were frustrated by the difficulty of finding music that supported the Bible teaching at camp.

In spring of 2000, the first group gathered at Camp Assiniboia with Bible curriculum notes, a Bible, some guitars and invited God to lead them.

“Our goal is not to write the next ‘Now Thank We All Our God,’” Neustaedter Barg says. “The goal is for the song to work for the summer—that’s it. If it serves the curriculum, that’s good enough.”

Gabrielle Wiebe, who worked as CWM staff for eight summers, sees great value in having songs that directly connect to the Bible lessons.

“It gives everyone a different way to learn,” says Wiebe, who studied at university to become a music teacher. “It engages you in a different way, because you’re singing . . . instead of just taking [information] in.”

Songwriting sessions typically begin with a discussion about what makes for a good camp song. Since children are only at camp for a week, it has to be something simple enough to learn within the first two or three worship sessions. At the same time, Wiebe says, the songs have to be musically interesting “so that it feels like something worth singing.”

Tempo, feel and where the song might fit into a worship session are also considerations during the songwriting process. Making sure the lyrics reflect CWM’s Anabaptist-Mennonite theology is key. (“These are real Mennonite songs,” Neustaedter Barg says. “These are as Mennonite as songs get.”)

Gerald Ens, a veteran CWM staffer who taught Bible at Camp Assiniboia for one summer, says having original songs creates cohesion between the worship sessions, fun activities and Bible lessons.

“It was a great teaching resource to have songs that both worked with the specific theme and more generally reflected what I was trying to say [in the lesson],” Ens says. He adds that when he was a camper, it was often original CWM songs that were the most meaningful to him. “Those songs spoke to me and really convicted me.”

The songwriting process is communal and collaborative. As such, the songs are credited to CWM as opposed to individual songwriters.

During the summer, original songs are tested when they are sung by campers. Songs that resonate with campers are collected on CWM’s website, where anyone is welcome to download recordings of the songs, as well as lyric and chord charts. There are more than 35 songs on the site.

“The songs that are on the website are songs that survived the summer,” Neustaedter Barg says. “They were good enough that people sang them all summer and didn’t let them slide away….That’s how it works. The community discerns.”