Singing into the future 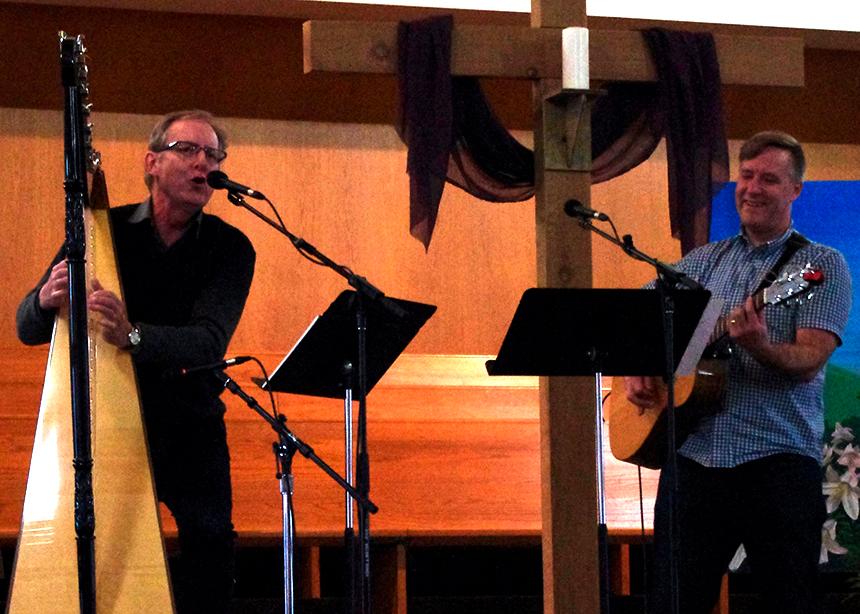 Music is an integral part of Mennonite worship. Whether it’s in church, at camp, at school or in everyday activities, songs have been faithful companions to Mennonites for centuries.

They can get so invested in music that it can be a point of unification but also a dispute that causes tension and division. The importance of music is why many people strive to keep Mennonite song collections in tune with the constantly evolving faith community.

More than 80 people from at least 16 different congregations across Manitoba gathered at Douglas Mennonite Church on March 11, 2018, to sing together, hear a progress report and raise funds for a new song and worship resources compilation that is currently being created.

Roughly every 25 years, Mennonite hymnals are re-examined and updated. Since Hymnal: A Worship Book, fondly known as “the blue hymnal,” was published in 1992, the time has come to once again review the current songbooks and create a new one. Resonate, a committee of 13 Mennonites from across Canada and the United States, was formed in 2016 to do just that.

Darryl Neustaedter Barg, Anneli Loepp Thiessen and Paul Dueck, members of Resonate, led the Winnipeg fundraiser. Old favourites like “What is This Place” and “My Life Flows On,” and new contributions like “Christ Be All Around Me” and a musical setting of “The Lord’s Prayer,” filled the sanctuary. Douglas Mennonite offered its space for the event free of charge.

The team was joined by Mennonite music legends Marilyn Houser Hamm and Henry Engbrecht, who reflected on the importance of singing in early Mennonites’ experiences and for the church today. Engbrecht emphasized the profound spiritual impact that congregational singing has on so many people’s faith journeys, as it did for him.

“This [hymnal] is a canon of the church’s life,” said Houser Hamm. “And it’s our history. Our identity.”

Many Mennonites agree and are asking the question, “So why are we changing it?”

“Well, because the world changes and the church changes, and what we sing needs to change, too,” said Neustaedter Barg, adding that it’s important to have a resource that reflects who the church is today and how congregants currently worship. One part of this is connecting with the global Mennonite church and larger Christian church, he said.

Loepp Thiessen agreed that change is important because a song collection should represent and support the broad diversity of Mennonite churches and speak to their needs. “At this point in history, we need songs that bring people together and unite our church,” she said.

The committee has already met a handful of times, but there is still a lot of work to do before the 2020 release, said Neustaedter Barg. The tasks are to review every song in Hymnal: A Worship Book, Sing the Journey and Sing the Story (almost half of the new collection will be made up of material from these resources); sort through more than 2,200 submissions of song texts, tunes, readings and visual art; and investigate what songs are important in the wider Christian worship scene right now. Resonate is also working on an accompaniment edition, and projector and tablet friendly versions of the book. This is not a quick and easy job.

The team is divided into three committees to look at song tunes, song texts and worship resources. Other than project director Bradley Kauffman and each committee’s editor, all the committee members are volunteers. Yet there are still a lot of costs for creating a new songbook. The expected development cost is almost US$700,000, of which $431,000 has been raised so far.

MennoMedia, the publisher of the new song collection, is a small organization that doesn’t have the funds to develop the resource itself. The project is entirely funded by donations, which also help keep the resource more affordable for congregations, according to Steve Carpenter from MennoMedia, who spoke at the fundraiser. Additionally, MennoMedia has created the opportunity for donors to have names placed in the back of the hymnal, starting at a minimum donation of $500. Different donation levels give different benefits.

The hymn sing fundraiser in Winnipeg raised almost $2,200 and followed eight other events of a similar nature across Canada and the U.S.

“The hymn sing at Douglas went really well; it was tons of fun,” said Loepp Thiessen. “I think it was an accurate representation of what our experience as committee members is like: lots of laughing, singing and learning.”

These gatherings are not only opportunities to donate, but a chance for Mennonites to connect with each other and remember why church matters. House Hamm says, “When I hear the singing, something stirs in my heart, and I know that these are my people and this is my church.” 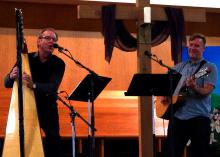 Marilyn Houser Hamm leads the congregation at Winnipeg’s Douglas Mennonite Church in singing ‘What is This Place.’ (Photo by Nicolien Klassen-Wiebe)

More than 80 people gathered at Douglas Mennonite Church in Winnipeg on March 11 to sing together and raise funds for the new Mennonite worship and song collection. (Photo by Nicolien Klassen-Wiebe)