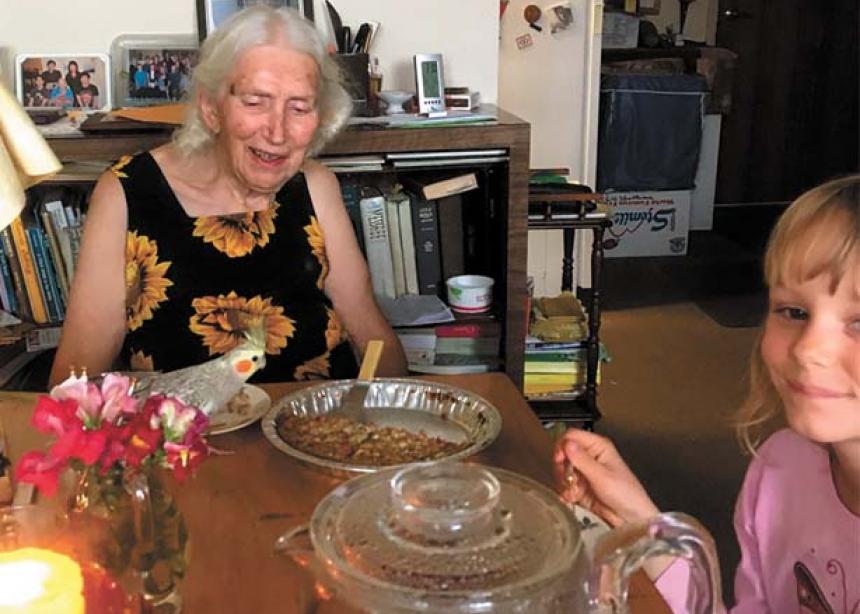 Annie Janzen earned no degrees and was never elected chair of a church council. She did not start a church, write a best-seller or perform for large audiences.

She did cook at Canadian Mennonite Bible College in Winnipeg for 27 years, travel the globe and make an unlikely diversity of friends. She lived a good, simple life. It was also a decidedly unconventional life.

Annie died in Winnipeg on Dec. 14 at the age of 91, after a brief stay in hospital following a stroke.

Earlier in the year, with the help of friends, she completed a modest, spiral-bound book about her life. In Gratitude consists of a timeline and some “signature” recipes, as well as brief homilies, letters and reflections she wrote for the writing group at Bethel Place, the seniors residence connected to Bethel Mennonite Church in Winnipeg, where she lived.

Her life was certainly worth chronicling, not as a litany of lofty achievements, but as a unique expression of generosity, delight, curiosity, community and faith.

Annie was born in Pincher Creek, Alta., on March 13, 1930. She and her two brothers grew up on the family homestead in Springridge, east of Pincher Creek. Annie wrote about “memorizing Bible verses while herding cattle as they grazed along the roadsides.”

After she completed Grade 9, her schooling was interrupted to care for her ailing mother. At 16, she was baptized at Springridge (Alta.) Mennonite Church. Later, she attended Menno Bible Institute in Didsbury, Alta. Annie then cooked at the school for three winters before taking on kitchen duties at CMBC (now Canadian Mennonite University, CMU) in Winnipeg.

During the summers, Annie cooked at various camps and church events, including the Mennonite Central Committee Native gardening orientations.

She was part of three Winnipeg congregations: Bethel Mennonite Church; then Charleswood Mennonite Church, which grew out of Bethel; and, since 1983, Grain of Wheat Church-Community, where she was very involved.

“I usually sit in the front row,” she wrote in a homily included in her book, “where I experience the ray of light from the Christ candle moving toward me and returning from me to the flame.”

Annie’s story is one of openness—to new experiences, simple blessings and the deepest acceptance of God.

She took uncommon delight in the mallard duck that nested under the rhubarb plant in her riverside garden plot. In goslings at Betty Kehler’s farm. A grouse drumming in the woods. The Nutcracker ballet enjoyed with a friend she made on a flight into Winnipeg. A ring of bees fast asleep around the centre of a cosmos flower in her garden. A simple homegrown, home-cooked meal with friends. And the beloved cockatiel she gave herself for her 90th birthday.

According to Marvin Hamm, a longtime member of Grain of Wheat, Annie had “an amazing capacity to be amazed.”

Tanya Hoover, whose family gardened alongside Annie for many years, recalls a visit to the Hoover home during which Annie cuddled and doted over the family’s kittens, her heart captured by the little animals. Upon leaving Annie said, “I will remember this for the rest of my life.” Tanya realized that Annie truly meant what she said, and that the sentiment was not unusual. Annie was semi-regularly enthralled, often by plants and animals. And water.

Although she grew up on the dry prairie, Annie loved water, especially natural hot springs, extra especially if there was opportunity to roll in snow or jump into a cold lake in between hot soakings.

Somewhat out of character with her sometimes rigid commitment to simplicity—she did not own a TV, cell phone or microwave for most of her life—Annie’s curiosity and connections took her around the world. In addition to domestic excursions, Annie travelled to 66 countries, often visiting friends. From the fjords of Iceland (a blizzard preempted a Greenland side-trip), and a village in India, to a Mennonite heritage cruise through Ukraine, Annie was on the move (and on the lookout for hot springs).

While she never married, and lived alone most of her life, she had a wide and diverse network of friends, created through hospitality, generosity and, to some extent, force of will. I was recalling with my wife a lunch invitation Annie issued when we visited her church many years ago. My wife said fondly, “It was more a command than an invitation.”

Annie could be insistent. And particular. “Things had to be done a certain way,” Hamm said.

“She followed fiercely her sense of who she was called to be in the world,” recalled longtime friend Kate Geiger.

Annie was quick to offer hospitality and she was free to request the help of others, whether transportation to pick rosehips out of town, a place to stay in another country or a helping hand in the garden. Generosity flowed through her life.

Geiger noted Annie’s gift of forming diverse friendships. She took an interest in kids, people of different cultures, people within the church, people who left the church—all were welcome at her table.

Annie was one-of-a-kind. Quirky. Not inhibited by convention. When the COVID-19 pandemic hit, she took to exchanging items with guests by means of a bucket on a rope let down from her balcony at Bethel Place. She wanted to share a giant parsnip with the Hoover kids, so she let it down from her balcony.

On a visit to the Hoover home for supper in her final months, she insisted on bringing a box of wood scraps from the shop at Bethel Place to use in the backyard campfire she had requested.

When Geiger gathered an evergreen Christmas bouquet for Annie, she hoisted it up to her balcony and then divvied up the carefully arranged bouquet to parcel out to neighbours.

Geiger feels that Annie’s experience of being different likely made her more open to others who did not entirely fit in. Geiger said Annie had “a genuine concern that others should not be othered.”

Annie gardened, cooked and hosted as long as she could. The evening before her stroke, she hosted friends for supper. She gardened last summer, although much of the work was done by others. Chris Hoover helped her plant onions and garlic last fall, which now await the spring and whichever person from her large network will receive yet more of her generosity.

In a 2015 homily, Annie shared about a prayer experience that marked her life. Her mother had seen two daughters die—one of whooping cough, another of a ruptured appendix—before Annie came along. When her mother became pregnant with Annie, she was not ready for another child. “I carried the burden of being born of an unwanted pregnancy,” Annie wrote.

Then she recounted praying through the related feelings with others: “I received healing, with Jesus saying to me, ‘It is I who gave you life at the moment of your conception. Lift up your countenance and be radiant. My presence is within you. You are my child.’ This healing experience has transformed my life. I don’t have to prove myself anymore and I can be gentler in my dealings with other people.”

In a tribute to her brother Peter, who died in 2017, Annie wrote about travelling to Pincher Creek to be with him in his final days. Near the end, he told a visitor: “I’ve given up.” To which the visitor reportedly responded: “Oh but you don’t want to do that.” Annie gently noted that she did not consider the response appropriate. Peter said the same thing to a subsequent visitor, who responded: “Yes, Peter, this is your time of letting go.” This Annie appreciated.

And now she too has let go.

1. Can you think of people you have known who are not particularly famous, but whose lives are expressions of generosity, love for others and deep faith? In what ways are these people pillars of the church? How important is it to publicly honour their contributions?

2. Will Braun describes Annie Janzen as an unconventional person. What do you find intriguing about her life? Does she remind you of anyone you have known? In what ways was she a good role model for children? What do you think Braun admires most about her?

3. Kate Geiger said about Annie that, “She followed fiercely her sense of who she was called to be in the world.” What are some obstacles that hinder us from following our calling “fiercely”? Do you think we tend to describe fervent followers of Jesus as quirky or unconventional?

4. Annie described her brother’s death as a time of letting go. Under what conditions is this the appropriate way to view the end of life? What are the attitudes and spiritual disciplines that might have helped Annie accept death with awe and gratitude? 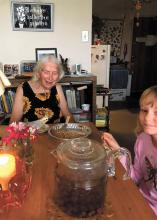 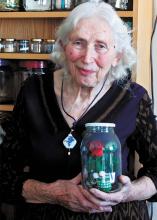 Annie Janzen in her Winnipeg apartment. (Photo by Craig Terlson) 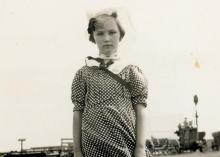 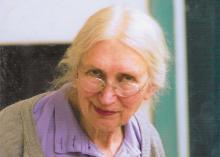 Annie was a marvelous and marveled person. Thank you Will for a very fine tribute to her.

I recall meeting Annie, for the first time, at an event hosted at/by CMBC, in the late ‘60s or early ‘70s.
She struck me immediately as someone who was at once dedicated to simplicity, and complexly direct with a responsive smile (or was that a smirk?) in response to a “stranger” before her.

She seemed to be focused on serving the best food, and offering the most relaxed yet purpose driven space for guests at the cafeteria - one felt her hand in the ambience as well.

Humble to a fault, vigorous in her response to life, I gained an appreciation for her persona, over the coming years. When time came for her to retire, I felt a personal sense of significant change having been foisted on community life where she was an icon.

What a life to have lived, to honour, and by which to have been touched.

Thank you for sharing this tribute.

I don’t often read articles that touch my heart the way this one did. Thank you, Will, for a beautiful story about a beautiful person.