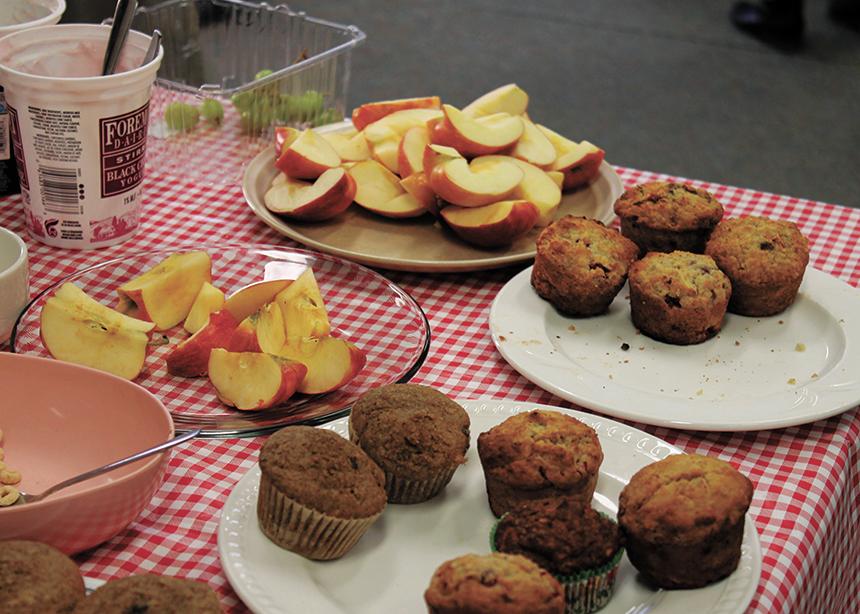 In 2017, when Kirsten Hamm-Epp was appointed to the newly formed Faith Leaders Council at the University of Saskatchewan, she likely didn’t imagine she would be hosting breakfast for up to 50 students every week.

But when the president of the Graduate Students Association approached the Faith Leaders Council with the idea for a breakfast program, Hamm-Epp saw in it an opportunity to get Mennonite Church Saskatchewan involved. In her role as regional church minister, she sent a request to local congregations to supply muffins for the breakfasts, which would take place at 8:30 each Thursday morning.

And many bakers responded, supplying not only muffins but also money with which to purchase fruit.

David Kim-Cragg is the ecumenical chaplain on campus. He also credits the Peer Health mentors, with whom the Faith Leaders Council shares office space, with helping get the program off the ground. “They supplied volunteers and helped advertise,” he says. “That made it more of a joy than a task.”

“It was a big morning,” says Hamm-Epp.

As word of the free breakfasts spread through the university announcement system, the program grew.

“This semester we’ve averaged 40 to 45 students each Thursday, and since March we’ve had 45 to 50 students,” she says.

Five to 10 regular attenders arrive early each week to help set up. These volunteers started coming for breakfast during the fall semester. Some of them have begun taking ownership of the program “in wonderful ways,” says Hamm-Epp. In late March, a group of Colombian and Mexican students made a Mexican-style breakfast of beans, salsa, guacamole, tortillas and eggs for their fellow students.

Hamm-Epp estimates that between 60 percent and 65 percent of participants are international students. “There are a number of Iranian, Colombian and Chinese students who attend regularly,” she says, “but they don’t keep to themselves.” When they arrive, students have to sit wherever there’s room, and this means mixing with others.

Lual, a medical student from South Sudan, says he finds that having breakfast on campus is “much better than eating alone,” adding, “The food is good, but the social networking is so much more important.”

He admits that lack of social contact has been a problem for him since coming to Canada. “Where I come from, everyone says hello to you,” he says. “Here, no one says hello. They are all busy on their phones.” At the weekly breakfasts he can have face-to-face conversations with other like-minded students, and friendships can form.

Hamm-Epp says that some students will take their muffins and go to class, but “many sit and chat for an hour.” She also hears students tell her, “Hey, I’m leaving now, but I’ll be here next week.”

She notes that another smaller group meets for breakfast on Wednesdays, hosted by other members of the council.

About five to seven regular attenders also participate in an informal Bible study, which begins at 9 a.m. Together, students and Faith Leaders read through a chapter from Matthew’s Gospel and share their thoughts and impressions with one another. They close their time together by praying for one another.

“I think I enjoy the Bible study almost more than the breakfast,” says Hamm-Epp. 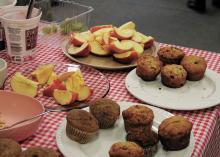