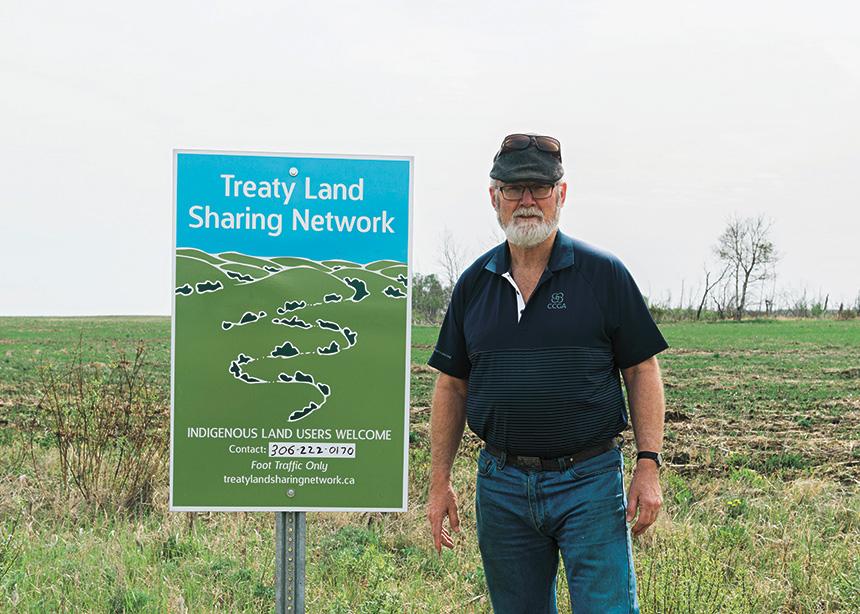 Doyle Wiebe stands next to the Treaty Land Sharing Network sign on his property, located near Langham, Sask. (Photo by Emily Summach)

Many Canadians are familiar with the saying, “We are all treaty people.”

It is a slogan created to remind all people, Indigenous and non-Indigenous alike, that treaties offer them rights and call them to responsibilities. A new grassroots organization in Saskatchewan is trying to help landowners live up to their responsibilities.

The Treaty Land Sharing Network is a group of farmers, ranchers and landowners who offer access to their land to Indigenous people to connect with the land, gather plants, hunt, and, in some instances, perform ceremonies.

Mary Smillie, a member of the network’s coordinating committee, sees the work of the network as a way to honour the treaties in very real way.

“First Nations entered into treaty with the settlers to the ‘depth of a plow,’ meaning farmers could farm, but the First Nations people could hunt and be on the land to live their lives, and, of course, it didn’t play out that way,” says Smillie. “We’re all treaty people, and we all need to take some time to understand what that means. Because what a gift having access to the land is for economic benefit and spiritual benefit. Land access is an opportunity, privilege, responsibility.”

The cofounders of the network, Valerie Zink and Philip Brass, were moved to action following the death of Colton Boushie, a young Cree Red Pheasant First Nation man who was shot and killed after trespassing on a farmyard in rural Saskatchewan. The landholder, Gerald Stanley, was found not guilty in Boushie’s death.

“You could feel the earth shake when the verdict came in,’’ and the network was founded “in an effort to be a counterpoint to the horror” of Boushie’s death, Smillie says. The group aims to help bridge the divide between landowners and Indigenous people in rural Saskatchewan.

Landholders who are interested in participating in the network must fill out an application form. Once approved, they receive a sign to put on their property, indicating they are network members and that this land is accessible to Indigenous people.

The network’s website (treatylandsharingnetwork.ca) allows Indigenous land-users to search for accessible land in the network based on location or other features, such as plant life. The network has 37 landowners sharing access to nearly 7,300 hectares across the province. Locations stretch as far north as North Battleford to the United States border in the south.

One of the network land-sharers is Doyle Wiebe. Wiebe, a member of Langham Mennonite Fellowship, is a fourth-generation farmer. He joined the network in April and now shares 65 hectares through the program.

For Wiebe, it was a growing understanding of the story of Indigenous Peoples in Saskatchewan that convicted him about how he could live up to his treaty responsibilities.

“There was an event last summer at Fort Carlton, Sask., where we heard the history of the treaties, and I was learning more about the relationship between settlers and Indigenous people,” he says. “That event, and other education like it, helped me to form a whole new set of opinions and beliefs of how our relationship should be fostered going forward. It reinforced the aspect that the treaties are perpetual, not one-off; treaties are about sharing, not apportioning land. My understanding is that the historic view of Indigenous people couldn’t even conceive of owning land. God owns the land just like the sky [and] trees; God gives to us to utilize for our benefit. The concept of owning land wasn’t seen in the language of the treaties.”

After joining the network, Wiebe contacted his neighbours to let them know about the sign and the program. Reactions were mixed, he says. And as of yet, he has had no land-users contact him to access his land, but he remains hopeful that the work of the network will continue to build relationships.

The decision to be a part of the network is deeply tied to Wiebe’s Anabaptist faith.

“We are all God’s creatures,” he says. “I have an admiration of the Indigenous view of the world and creation. We’ve done them a profound disservice, a negative impact, by taking away their dignity. And if there’s anything I can do to show them respect as a people, as with any other people I run into, anything I can do to improve relationship and show respect, and to help to reclaim some dignity, well, I want be on that side of history.” 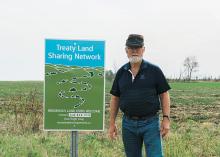 Doyle Wiebe stands next to the Treaty Land Sharing Network sign on his property, located near Langham, Sask. (Photo by Emily Summach)

Sounds like that region of our Menno settlers, is really on the cutting edge of rebuilding mutual respect, cooperation, peace, goodwill, and whole lot of new ways to “be” in the shared space and time.

Reminds me of other stories I was hearing back in the ‘80s when early conversations were tentatively hopeful for talks to lead to better days for all concerned.

I’m deeply moved by what I read (into) this story.

The Treaty Land Sharing Network initiative is a small but positive start towards the justice advocated by Yahweh and the pacifism/non-violence advocated by the Mennonite peace church theology. It is ironic that we as white European origin Christian colonizers are now offering to "share" the land belonging to First Nations. The Treaty Land Sharing Network site posits that treaties were a "sharing" agreement and not an agreement to cede or surrender title. Now we as white Mennonite members of a peace church, are in positions of power and ownership, whereby we are willing to provide some access to the "stolen" land in our possession.
The Mennonite "peace theology" position hangs by a thread when based on the underpinnings of the violence of stolen land and dispossessed First Nations peoples. The Mennonite community has in my mind, always had quite some difficulty in being "anti-colonial" because a serious examination of anti-colonialism would entail how we came into possession of the land, how that has impacted the First Nations groups, and what a just response might require of us. I am not a Biblical scholar, but would Yahweh, that great God of justice, not recommend to His people, that the land be returned?