For Benjamin Weber, working with youth is a way to use the gifts God has given him 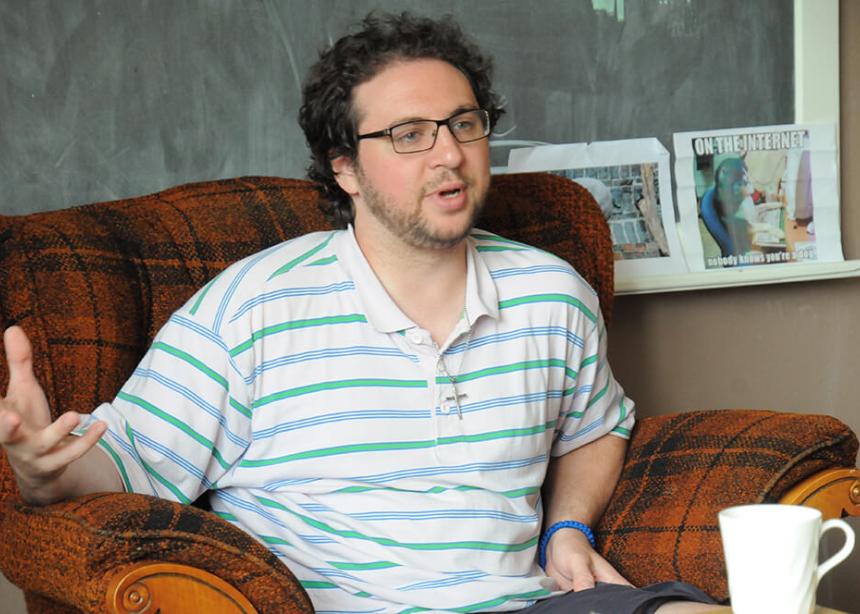 Some teachers want their lessons to run smoothly, but not Benjamin Weber.

“I like a healthy amount of chaos,” says Weber, 29, who teaches the youth Sunday school class at Stirling Avenue Mennonite Church in Kitchener, Ont. “I open the floor and let them ask me about anything. Usually it’s about current events, so we relate that back to the topic at hand.”

Weber has taught the class for the last four-and-a-half years.

“I believe God has given me this gift of fascination for things, a good memory for knowledge and the ability to impart that knowledge in a semi-coherent way, so I want to use that gift any way I can,” he says, adding with a smile: “I’ve gotten positive feedback, so I know I’m not completely corrupting the youth.”

Weber has not always been this passionate about church involvement, though. After growing up at Stirling, he stopped attending church for seven years in his late teens and early 20s.

“There was no definitive break, just a gradual process of going less and less,” he says.

At the same time, his interest in religion led him to study it at Wilfrid Laurier University in neighbouring Waterloo. Weber used his studies to think through whether he wanted to re-join the Mennonite church or follow a different religion.

“It wasn’t a knee-jerk [decision] to return to the Mennonite church,” he says. “I wanted to learn about all the faiths in the world so I could make a good decision. . . . It never hurts learning about other people’s religions. If anything, it only makes your own faith stronger.”

In addition to Weber’s studies, struggling with some bouts of mental illness led him back to Stirling. He had become socially withdrawn and wanted to return to Stirling because he was familiar with the people there, thinking it would be a good place to reignite his social life.

Weber was baptized when he was 26. He was serving on Stirling’s Faith Formation Committee when someone asked him if he would teach the youth Sunday school class, which consists of a handful of students in grades 9 to 12.

Weber and Carrie Martens, pastor of faith formation at Stirling, devised a three-year teaching plan that looks at both the Old and New Testaments, and covers topics like Anabaptist distinctives, women in the Bible and Christian tradition, and human sexuality. There is quite a bit of flexibility within the teaching plan for Weber to explore whatever he thinks will most connect with the church’s youth.

During a recent series on the gospels, the discussions centred around how Jesus’ parables relate to North American life today. This led to a discussion about reconciling religious faith with science.

“Science is all about questioning and doubt, and religion is often seen as just being about dogma and following the rules,” Weber says. “I think the Christian that can’t question and doubt is a shallow Christian. I think it’s important to question everything you hear. That’s why I encourage my students to question me.”

Martens says it is Weber’s confidence in what he believes and his ability to field questions from the youth that make him a successful Sunday school teacher. “He’s not threatened by what they ask,” she says. “It makes it really easy to have open dialogue, because the conversation remains fluid.”

She adds that Weber has had a profound impact on many of the youth, some of whom have mentioned his influence when talking about their decision to be baptized.

“Benjamin is very unique in his ability to analyze information, in his ability to inspire questioning or direct conversation [and] in his ability to intuitively know what will kind of have purchase with youth,” Martens says, adding that Weber’s passion for digging deeply into matters of faith is coupled with a quirky sense of humour. “He has the ability to laugh at himself, which the youth really appreciate.”

Weber keeps a handful of poetry books in the classroom where he meets with the youth, and ends each class by reading a poem. “Poetry opens your mind and makes you think harder, and I just think it’s a good way to end classes,” he says.

While he draws inspiration from writers like C.S. Lewis and T.S. Eliot, Weber says one of his biggest influences is William Tyndale, the 16th-century priest and scholar who translated the Bible into English because he believed everyone should have access to it. “I want all knowledge to be available to everyone, and then people can take that information and make their mind up with that, and they can find the truth, and hopefully find God through that,” Weber says.

“I’m very much a believer that faith affects everything you do,” he adds. “[Faith] is a big part of my life . . . and I hope to share that with other people.” 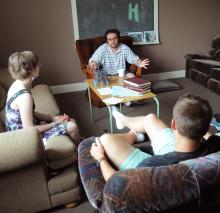