“You should do something with all this,” was the doctor’s prescription.

“All this” were the art supplies scattered across Shannon Moroney’s husband’s studio in their house. Jason, her husband of only four months, had at that point been in prison for three months awaiting trial for two violent sexual attacks on other women. Moroney was feeling completely shattered, having been told of his arrest while on a business trip.

Two weeks after the doctor’s strong suggestion, she had produced “The Shattering” or “Victim Impact Statement Exhibit 13B,” a mixed media collage, in early 2006. Full of images pasted around her wedding photo, she had begun her journey of healing, a journey as long as the salmon in the piece, swimming, as she says, “a thousand miles upstream.” Also included are images of Frieda Kahlo, the Mexican artist who struggled with both physical and relational pain throughout her adult life. “I was looking for connection and belonging in such a fractured landscape,” says Moroney of the collage.

Moroney’s art is being shown in the Centre for Peace Advancement at Conrad Grebel University College in Waterloo until Dec. 18, 2015, her first official show. In her more than 150 presentations on trauma and resilience she has used images of her art to illustrate her journey. She says most of her art stays in the garage, the images being too raw and violent to hang on the walls of the home she shares with her new husband and twin three-year-old daughters.

Two paintings that are allowed inside are 2008’s “Three Years Later” and 2009’s “Letting Go.” The first of these is a collage of four tulips in a fractured landscape. She had just returned from another painful visit with her first husband in prison and arrived at home to see the tulips pushing up through the snow. The “ground” through which the tulips push is broken glass, but Moroney says, “I was able to start walking again, though carefully.”

The second painting is a large blue field with gauze spread over the centre and around a frame. According to the artist, these symbolize a torn wedding dress, symbolizing “holding on to something essential in a post-trauma journey, but letting everything else go.” At the top of the piece is a broken necklace, given to Moroney by her maid-of-honour at her first wedding. “That relationship didn’t last the crisis,” she says. When she tried to wear it, the necklace broke repeatedly, so she “glued to canvas—sometimes what is broken cannot be fixed.”

Moroney now lives in Toronto, Ont. She volunteers with Leave Out ViolencE (LOVE) and is also a contributor to the international Forgiveness Project. 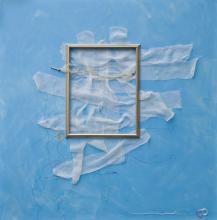 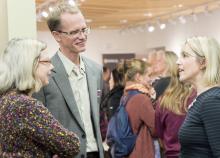 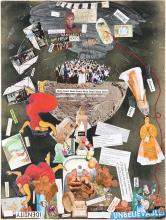 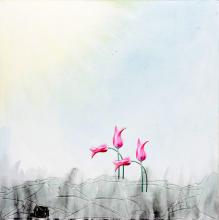