The Sermon on the Mount: living it out in mind and heart

Fourth in a five-part series leading up to the Mennonite World Conference assembly in Harrisburg, Pa. 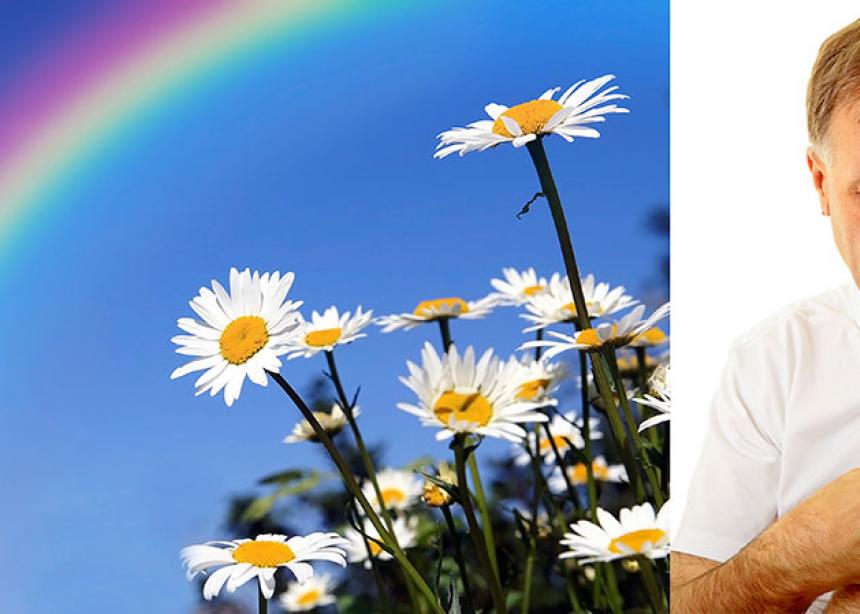 <p>The Sermon on the Mount is the thorn in our side and the rainbow in our sky, discomforting and comforting by turn, but always calling us beyond our perspective to a more joyous and loving existence.</p>

I was down in Mississippi, at a small African-American church. My parents were volunteering there with a ministry that had many different programs going. They had a farm, a clinic, a law office, a school, sports activities for the youth of the community, a resale shop, among other worthy endeavors.

I was surprised, and dismayed, to hear on Sunday morning a sermon about the Sermon on the Mount being for the last days. There was no dissent in the congregation, a congregation that was vocal about both assent and dissent. Heads were nodding and Amens heard. The dissonance was mine.

Here was a congregation living out the Sermon on the Mount more faithfully than many Anabaptist congregations I knew, but disavowing its relevance for the contemporary situation in which they found themselves. It was neither the first nor the last time I’ve had to gulp and swallow hard in my intercultural and ecumenical experiences over the years, but it remains one of the most vivid.

Congregations in the Anabaptist traditions have long held that living out the Sermon on the Mount is doable and that, furthermore, it is our calling. We’ve cherished some assumptions about that notion. One is that it takes a community, a church that is voluntary, visible, and in which there is mutual accountability in order to make the Sermon a way of life. We cannot do this on our own.

Another assumption is that it takes a peculiar people, a sectarian understanding, to live the way of the Sermon. It is not for mainstream or popular churches which are, by nature, overly influenced by what is practical or notions of the common good that include the necessary, if lamented, use of coercion in order to keep evil within bounds. The Sermon is for those traditions who favour being faithful over being effective in the world at large.

Ulrich Luz challenges those assumptions. Luz is a German scholar who has taken Anabaptist traditions far more seriously than any other commentator I know. In his sections on the history of interpretation he almost always includes Anabaptist perspectives. In his comments on the Sermon on the Mount, however, he takes Anabaptists to task for assuming that the ethic of the Sermon is only for sectarian groups. In fact, he says, the ethic of the Sermon is not only for the entire Christian church but for the whole of the world God created as well. The church in all its forms is held directly accountable by the Sermon, but the world is also held accountable to the Sermon, if indirectly. The Sermon is, without equivocation, the standard for human behaviour and human attitudes.

Those are bold words, bolder than I have heard among Anabaptist thinkers and church leaders. But they are words that we need to hear. Moreover it is a boldness that we need to adopt, without apology. Who better to make this expansive and missional claim than people who have tried for 500 years to live by Jesus’ words in Matthew 5-7? But to proclaim boldly that the Sermon on the Mount is God’s standard for the church and the world likely requires two shifts in our understanding of the Sermon—a shift in mind, our thinking, and a shift in heart, our feelings or attitudes.

The Sermon on the Mount contains a variety of genres, in the small sense of the word. The Lord’s Prayer is a poem. The story of the wise and foolish builders at the end of the Sermon is a parable. The saying about putting out the offending eye and cutting off the offending hand are hyperbole—never in this world to be taken literally.

In the larger sense of genre, the Sermon on the Mount is a series of what we sometimes call focal instances and, it is in this larger sense of genre that it is critical to know what kind of literature the Sermon is. Focal instances function to disturb our conventional thinking and get us to think outside the box. Focal instances function to give us ideas about new and different ways to live in the world. They are not meant to be copied or to be followed in any sort of slavish manner They are provocative and evocative rather than prescriptive.

So, Jesus says, if someone forces you to carry his or her pack for a mile, do it for two miles. Even in first century Palestine, where such an event was a live possibility, Jesus did not mean for his hearers to go looking for Roman soldiers with packs to carry. What he meant was that when we are forced to do something against our will or desire, we might well turn the situation around with our provocative and evocative attitude. We might well maintain our dignity; we might well shame our opponent; we might well derive moral goodness out of an attempt to demean us—by refusing to be humiliated and taking the proud, high, moral ground, out of the goodness of our heart.

So, Jesus says, look at the lilies. They don’t toil or spin and they still beat Solomon in all his glory. Even if some of us in the contemporary situation can afford not to work, that was hardly true of Jesus’s audience. He wasn’t advocating a general stoppage of work; he was asking his followers to take a look at their anxiety about work, about putting bread on the table, about survival in that harsh and uncompromising economic situation in which few people had options other than drudgery.

Joy and love constitute the second shift, the shift of heart, necessary to adopting a bold proclamation and living out of the Sermon on the Mount. We have a tendency in religious life to separate the behavioural aspects of the moral life from the grace that grounds it. The Israelite notion of the law was behaviour fundamentally rooted in the love of God for the Israelites. We act in these ways, and we are delighted to do so, because God has shown us steadfast mercy, time after time. It is the narrative of God’s love for God’s people that keeps us choosing the way of life rather than the way of death.

That Hebraic sense of grace is also at the heart of the Sermon on the Mount. UIrich Luz points to the Lord’s Prayer as the heart and soul of the Sermon. It is literally at the center, for one thing. It also grounds the Sermon thematically. For instance, the concern for the holiness of the name of God resonates in the injunctions to let one’s yes be yes in the early part of the Sermon as well as the command not to just say the name of the Lord but to do the will of the Lord at the end of the Sermon. The concern for daily bread resonates with the Beatitudes at the beginning but also the lilies of the field in the second half. We fulfill the Sermon, and can only fulfill it, by doing so out of gratitude and love for the God who gives us our daily bread, forgives us, and delivers us from evil.

Boldly proclaiming and boldly living out the Sermon on the Mount can be a joyous and generous way to live, if our practices are rooted in the loving relationship we have with Jesus. It is a way of life that challenges our best thinking. How, in our own world, with our own challenges, can we turn the tables on evil and live with humanity and dignity not only for ourselves, but for our neighbours and for our enemies? What surprising ways can we think and act outside of the boxes of race, gender, class, and other “isms” in which we find ourselves caught? What does it take to nurture and sustain the joy and the compassion of our own status as deeply loved children of God, followers of Jesus, indwelt by the Spirit?

Living boldly in the Sermon on the Mount, claiming it for the church and the world, just might be the most important key to living well in faith.

This article was commissioned by Canadian Mennonite in preparation for the July 21-26, 2015, Mennonite World Conference Assembly. See others in the series:

The Sermon on the Mount is the thorn in our side and the rainbow in our sky, discomforting and comforting by turn, but always calling us beyond our perspective to a more joyous and loving existence.