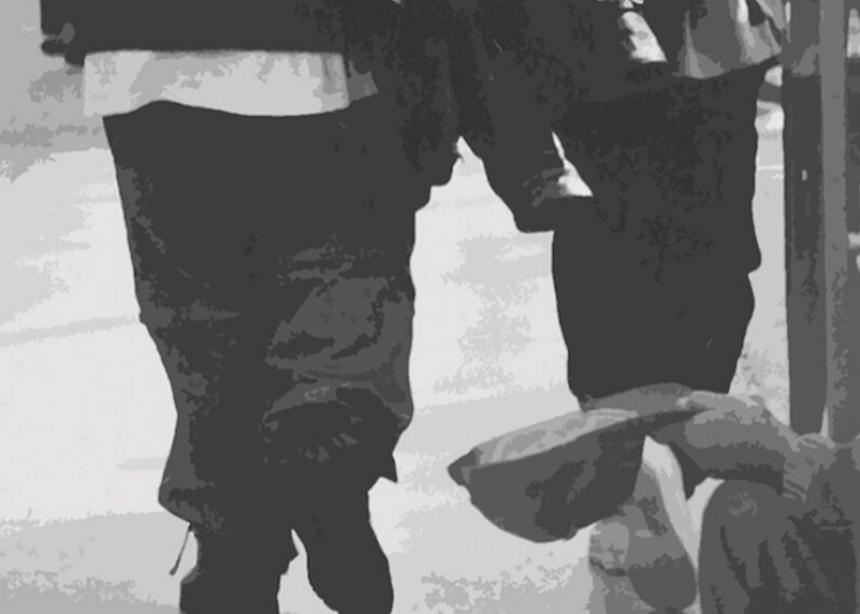 When I am asked what I do for a living, I often say, “I show people how much fun it is to give their money away.” That elicits a better conversation than if I tell them I manage a registered, charitable, donor-advised foundation.

I love what I do. It’s a joy to work with donors and colleagues who give money to see the world become a better place through the kindness of generosity. I also like the opportunity to “sell” generosity and charitable giving to people.

Yes, it’s true. People don’t just give because it’s a good thing to do. Many need encouragement to be generous. Altruism is a journey, and charities know this. This requires conversations with prospective donors, creating website content that engages people, and publications that tell the stories of lives changed. Aggressively waiting for the phone to ring has proven an ineffective strategy for charitable organizations.

According to the 2018 “30 years of giving in Canada” report by the Rideau Hall Foundation and Imagine Canada, whose board I sit on, charitable giving in Canada in 2014 was “approximately $14.3 billion in receipted and unreceipted donations to registered charities.” That is a 150-percent increase in real terms since 1984. The social value created by Canada’s 170,000 registered charities and not-for-profit agencies is larger than many people think. The sector employs two million Canadians and accounts for more than 8 percent of this country’s gross domestic product.

As beneficial as the charitable sector is, there is a problem

Charitable giving is sometimes a bandage solution to bigger problems that lie beneath the surface, such as systems of injustice and the blindness that fails to see or acknowledge them, or (un)conscious bias and the strong desire to keep the current social order in place.

The recent WE Charity/Canada Student Services Grant scandal has done little to help the conversation. We should be talking about the importance of the charitable sector and the need to do things differently, so that broken systems are fixed and marginalized people in society do not fall further behind.

Instead, the storyline has been about politicians who should have recused themselves from decision-making, the fall of the Kielburger brothers and their youth-motivation empire, and whether or not charities in this country can be trusted.

The COVID-19 pandemic has wreaked havoc with the global economy and it has also shone a light on the growing divide between the “haves” and the “have-nots.” The doors to factories and many other places of employment have been kicked open, and we are forced to see with new eyes the “gig” workers and underemployed who have been hit the hardest. Essential workers now include those who stock grocery shelves and work the cash register, but their newfound importance is not reflected in how they are treated and paid.

Some have said that the pandemic has put us all in the same boat. Hardly. We might all be in the same storm, but some of us are weathering it in a yacht while others are in dinghies or clinging to driftwood.

Affordable housing in Canada has been decreasing since the 1980s. Wages have not kept up with inflation, and housing costs have risen to the point where adequate housing is increasingly unaffordable for a growing group of people. For many, home ownership is a pipedream.

Of course, there is value in donating to shelters and other facilities that work to keep people safe and off the streets, but that does not solve the affordable-housing problem. That is a larger issue that begs us to consider what a just society looks like, and asks, “What will we do to make that just society a reality?”

Food insecurity is another growing problem in Canada and around the world. Donating food to foodbanks is greatly needed, but is the objective just to feed hungry people or do we want to eradicate hunger? Feeding hungry people is an immediate need that is solved as long as enough money is donated to foodbanks and we have sufficient volunteers to run the programs, but it fails to ask a far more important question: “Why do we have hungry people when the world has the capacity to grow enough food for everyone to live?” Donating to a foodbank is charity, but tackling the larger issue of why people are hungry in the first place requires us to address an injustice.

Charity and systems of injustice

Where there is a need for people to be charitable, there is likely a system of injustice that needs to be addressed as well. In the grand scheme of things, giving to charity is easy. It is voluntary and doesn’t require donors to ask many questions if they don’t want to. It is when we address the injustice that people become uncomfortable. As Dom Helder Câmara, a former archbishop of Brazil, said, “When I give food to the poor, they call me a saint. When I ask why they are poor, they call me a communist.”

Yes, the poor will always be with us. Jesus said it himself. But isn’t it strange that we have historically read that passage found in both Matthew 26:11 and Mark 14: 7 from the lens of prophecy? What if we read this passage as Jesus’ indictment—as a call to right wrongs, free captives from societal prisons and create a world of justice? Would our behaviour and mindset change if Jesus had said, “The poor will always be with you, so what are you going to do about it?”

The solution is not a matter of picking sides between charitable giving or addressing injustice. It is a “both/and” solution. Give to causes that make a difference, but confront injustice as well.

It may not be your calling to plan a march or organize a protest, but that is hardly the only way one can confront injustice. You can:

This list is hardly complete, and it is offered from the perspective of a white, middle-aged, cis-gendered heterosexual male, who has enjoyed the benefits of a system that was created for people who look just like me. I welcome the wisdom of those with lived experience different from my own to add to this list and to point out my blinders and insensitivity.

In the meantime, keep giving to charity

The needs are immediate. Some problems, and the people who face them, can’t wait for justice. They need support right now, and donations to charity can be some of the most efficient ways to ensure people and causes are supported.

Giving is the antidote to greed. The temptation to have more and accumulate is everywhere. Few people are immune to it. When the desire to have more gets the best of us, or we feel ourselves experiencing envy, it might be the time to donate something for the benefit of others. As it has been said, “If you are more fortunate than others, it is better to build a longer table than a taller fence.”

Charity isn’t perfect. So what? Give anyway. Charities, like any other organization, lack perfection, but that doesn’t mean they are without credibility. Except for a handful of organizations, charities in Canada run a pretty tight ship and do amazing work. You can donate to them knowing your donation is making an impact for a cause you care about. If you are still not convinced, find another charity to support, but don’t use your angst as an excuse to sidestep living generously.

You feel better when you give. Many times I have heard people say how good they feel when they have supported charitable causes. Give it a try if you don’t believe me. You might surprise yourself.

Stop giving out of duty and obligation. No, really. I’m serious! Some folks have it in their head that giving is about duty and obligation to prove one’s faithfulness. Charitable giving is an opportunity to share the resources you find in your possession. It is not the premium payment for the assurance of your salvation. Generosity is a holy moment given to you by God. Give thanks for the opportunity to be generous and do it with joy!

We are in the midst of a pandemic that has not only affected our physical and mental health but has kept us isolated from friends, family and colleagues, and wreaked havoc with our economy, the effects of which we might feel for decades to come. God willing, COVID-19 ends soon, but we may be in this for a while. That shouldn’t stop us from lending our voice and our wallets to do the right thing. As painful as this pandemic continues to be, it is also a chance for us to step up and be better than we were.

Darren Pries-Klassen has spent his career in the charitable sector. He is the past board chair of the Canadian Association of Gift Planners and currently sits on the board of Imagine Canada. Imagine Canada helps charities and nonprofits better serve people and communities. He is the chief executive officer of Abundance Canada, a faith-based, donor-advised foundation known formerly as the Mennonite Foundation of Canada.

1. What charities do you support? Does giving bring you joy? Why or why not? Where did you learn to be generous? How would you describe to someone else the benefits of generosity?

2. Darren Pries-Klassen writes that giving in Canada in 2014 was 150 percent higher, in real terms, than in 1984. Do you find this statistic surprising? What reasons can you think of for this increase in giving? How has your community increased its charitable work in the last 30 years?

3. “Charitable giving is sometimes a bandage solution to bigger problems,” says Pries-Klassen. Do you agree? What problems do you see in your community that need a better solution than charities can provide? Can charities themselves be a problem?

5. Which of Pries-Klassen’s ideas for confronting injustice are you involved in? Do you find any of them beyond the realm of possibility? What other ideas do you have for improving justice in your community? 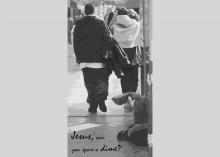 ‘Jesus, can you spare a dime?’ (Mennopix Digital Art by Ross W. Muir)