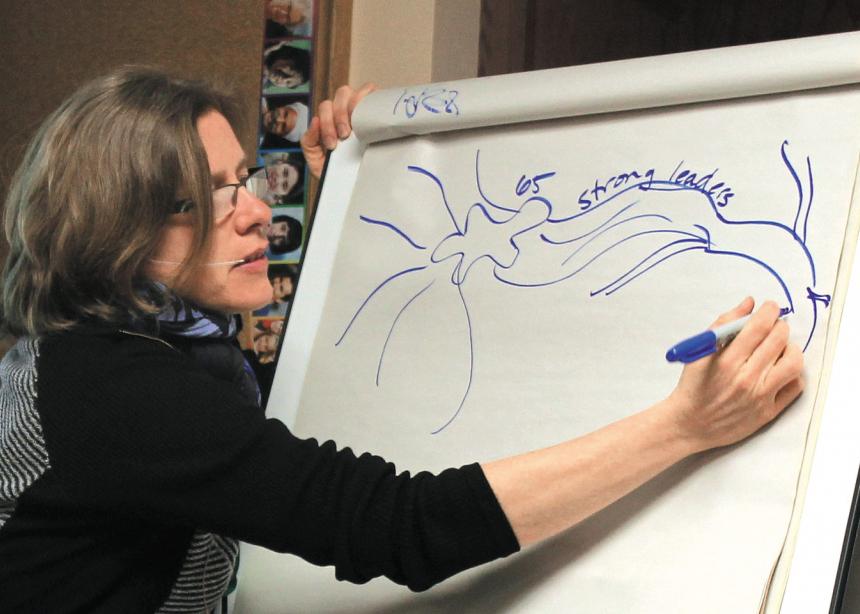 Where does one begin to renew a church? According to Betty Pries, the best place to start is with prayer, saying, “Finding our way through times of spiritual upheaval depends on spiritual renewal.”

Pries, who is a managing partner with the L3 Group in Waterloo, Ont., was the presenter at a workshop hosted by Mennonite Church Saskatchewan. Entitled “Refresh, refocus, renew: Open to God’s leading,” the workshop was held on April 28 and 29, 2017, at Mount Royal Mennonite Church in Saskatoon.

MC Saskatchewan has hired Pries to guide the area church through a yearlong visioning and direction-setting process. The first step was an online survey of members. The weekend workshop was the second step.

The workshop began with a session on spirituality and prayer. “There are three rhythms that are consistent in spiritual life,” said Pries. The first, “awe and wonder,” is associated with blessing and joy. The second, “suffering,” is linked with original sin, brokenness and wilderness. The third, “transformation,” is related to acceptance and surrender. “The church in Canada is in the suffering, wilderness stage,” she said, adding, “The way out of suffering always involves surrender.”

“Prayer,” said Pries, “is about letting go of all that keeps us removed from God’s presence.” While there are many forms of prayer, the listening prayer can be highly effective in opening heart, mind and soul to God. Listening prayer is not about hearing God’s voice while praying. Rather, it is about returning to God’s presence, again and again, in order to open oneself to God’s leading in the rest of life. “For most,” said Pries, “it is really hard to do.”

During the second session, Pries presented the results of the online survey. The 77 respondents represented 29 congregations; 44 percent were in the 51-65 age range, and 30 percent have been involved in MC Saskatchewan churches for more than 50 years.

Results indicate that members feel a deep love for the church and experience a strong sense of belonging, meaning and purpose. They expressed disappointment in declining or sporadic attendance, the tilt toward aging congregations and differences that have resulted in divisions between people. Hopefulness came from seeing young people grow in faith and from ministry projects that tear down barriers and open congregations to the world.

Said Pries of the results, “MC Saskatchewan is more about community, relationships and belonging than about structure.”

In the discussion following this presentation, participants asked some difficult questions:

• Lisa Martens-Bartel of North Star Mennonite in Drake noted that “the same conference people” filled out the survey, and asked, “How do we fill the gap between the engaged and the less engaged?”

• Joe Heikman of Wildwood Mennonite in Saskatoon said, “Those who aren’t engaged, but would like to be, named that there is grief.”

Pries acknowledged that “differences are painful and powerful,” but added, “We need differences to be strong, to be sharp. The Holy Spirit doesn’t just talk to me or to you, but to us working together. In differences, we find our way forward.”

In the remaining session, Pries led participants through a study of the “congregational life and renewal cycle.”

• During “creative formation,” congregations experience the nearness of God’s presence and a strong sense of vision.

• The next stage is “thriving,” in which congregations experience strong leadership and know why they are in existence.

• Eventually, energy begins to wane, and the congregation moves into the “struggle” phase, in which “structure begins to drive mission rather than the other way around,” said Pries. While there is a deep desire to return to the “thriving” stage, it is impossible to recapture what was.

• The next phase, “crisis and confusion,” is characterized by sorrow, grief and blame. “It’s not wrong to be in a stage of suffering,” said Pries. “If we stay in a stage of awe and wonder, we get to be ego-driven. Struggle brings our feet back to God’s fire.”

• “Surrender” follows, and is “hard, hard work,” said Pries. It involves relinquishing control and being open to hearing one another. Pries cautioned, “This is where most congregations and denominations stop the potential of their renewal journey.”

• The final stage is “listening.” “Don’t expect God to speak immediately,” said Pries. “It takes a bit of time to surrender enough to hear God speaking.” She asked participants to try to discern what questions they are to bring to God as a collective of congregations.

The next months will be a time of listening for MC Saskatchewan. The reference group, which includes Christy Martens-Funk, Anita Retzlaff, Pauline Steinmann, Josh Wallace, Kirsten Hamm-Epp and Ryan Siemens, will invite congregations to intentionally engage in a time of listening prayer during worship each week, seeking God’s guidance for the area church.

At the risk of being misunderstood, I would like to suggest that we have probably prayed enough and that we need to commit ourselves to living according to the quite adequate light we already have available to us in Scripture and in Jesus' life and teachings. I am not sure what will be gained nor how it will be measured if we commit to practicing listening prayer seeking guidance for the church.