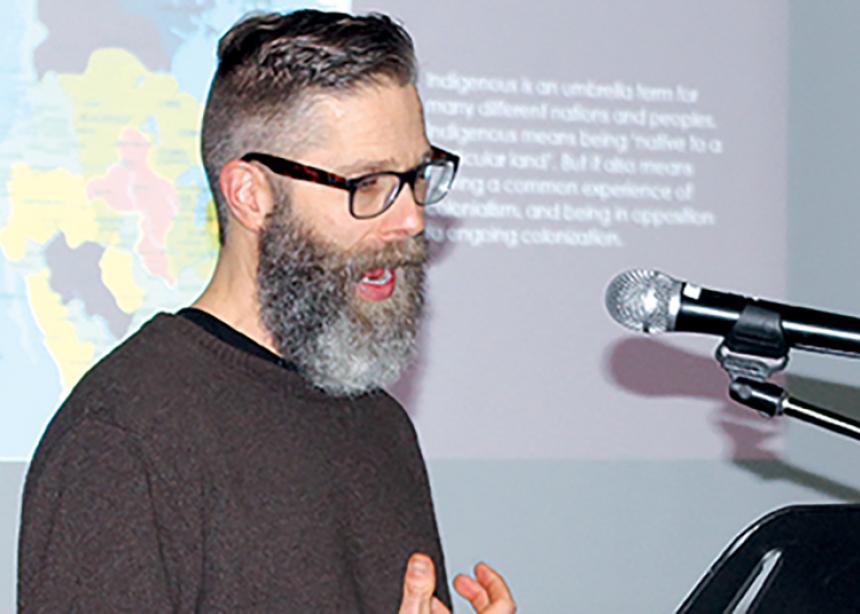 What does the ancient Levitical concept of jubilee have to do with reconciliation between Indigenous peoples and their settler neighbours? Plenty, according to Steve Heinrichs.

During Rosthern Mennonite Church’s Deeper Life Days on Jan. 26 and 27, 2018, Heinrichs, who is director of Indigenous-settler relations for Mennonite Church Canada, presented a three-session workshop entitled “Unsettling discipleship: The cost of colonialism, the joy of jubilee.”

Canada’s Truth and Reconciliation Commission and its resulting Calls to Action have raised awareness of past and present injustice toward Indigenous peoples. The current paradigm for reconciliation is one of social equity through education, bridgebuilding and friendship, said Heinrichs, and while these things are important, they are not enough to heal the fractured relationship. What is needed, in addition to friendship, is land reparation.

Some participants confessed to feeling challenged by Heinrich’s viewpoint. “[Land reparation] involves a giving up and we’re not ready to do that,” said Bernie Thiessen. “The other [view] involves educating ourselves.” Delilah Roth captured the complexity of the issue when she said, “As farmers, we feel a responsibility to the land, to feed the world, but just to give the land back is idealistic.”

Land reparation may be the key to reconciliation, but talking about it is difficult. “I find this challenging myself,” said Heinrichs. “It can be overwhelming and paralyzing.”

Indigenous political leader Art Manuel wrote: “It is the loss of our land that is the precise cause of our impoverishment. . . . The land issue must be addressed before reconciliation can begin.”

The biblical model of jubilee offers a hopeful paradigm. In Leviticus 25, God commands the Israelites to set aside every 50th year as a year of jubilee during which the land will remain fallow, debts will be cancelled, slaves will be set free and land will be restored to its original owners.

Jesus’ inaugural message in Luke 4 is most likely a reference to jubilee, according to Heinrichs, as is his Sermon on the Plain in Luke 6. But it is the tax collector Zacchaeus, in Luke 19, who perhaps best embodies jubilee. As evidence of his changed heart, Zacchaeus promises to give half his possessions to the poor, and if he has defrauded anyone, to repay them four times as much.

Reconciliation through jubilee begins with prayer. Heinrichs cited theologian and activist Ched Myers, who says that “to pray is to learn to believe in a transformation of self and world.”

Reconciliation through jubilee does not have to be difficult. It might include donating a portion of real estate sales toward land reparation funds. The Jubilee Fund, founded jointly by MC Canada and Mennonite Central Committee, is one such possibility.

It might include speaking out in solidarity with Indigenous people as they fight for their rights. In the Churches for Freedom Road campaign, a number of Winnipeg churches voiced support for the Shoal Lake 40 community’s plea for a road to give residents access to safe drinking water.

It might also mean walking alongside Indigenous people as they lobby for legislative change. “Our white faces have more power on the steps of the legislature than native faces,” said Heinrichs. “We need to leverage that.”

As challenging as these actions may be, they are inherently joyful actions, he said, suggesting that acknowledging and righting the wrongs of the past is liberating work for both Indigenous and settler peoples.

Again citing Art Manuel, Heinrichs said, “There’s no down side to justice.”

Indigenous people are ready to embrace the concept of jubilee. Rarihokwats, a Mohawk teacher, offers this re-envisioning of Leviticus 25 in a new book project that MC Canada’s Indigenous-settler relations department is creating called Unsettling the Word: Biblical Experiments in Decolonization:

“The Earth is your Mother. Who would sell their Mother? Remember that you reside on these lands during your time as a visitor, a steward of the land and its gifts which are intended for your Seventh Generation. The land provides for the life of your children and you must provide for the redemption of the land. If one of your neighbours has necessities, you will invite her to your table. You will help her meet her needs. You will expect nothing in return.”

See also “Land is the heart of the matter.”

Steve Heinrichs, left, invites workshop participants to stand on an imaginary spectrum identifying their views on reconciliation, ranging from advocates for land reparation to those advocating education and friendship. (Photo by Donna Schulz)

I understand the compassion Mr. Heinrichs feels for our First Nations people. As someone who has worked closely with them for many years in the correctional system, I have a deep love for them as well. Asking us to re-enact Mosaic Law, however, to make reparations is very misguided and concerning.

Firstly, it is no little irony that someone is asking us to look to the Torah for guidance on social issues when we have heard nothing but disdain for the Law from many in our church when it comes to the often heated debate concerning homosexuality. It concerns me that another Mennonite leader seems so confused about the Bible, in this case which aspects of the Law were abrogated (animal sacrifices, dietary laws), which remain untouched (sexual morality), and which are transformed by the cross of Jesus (jubilee, warfare, the Land). Luke 4 clearly demonstrates that Jesus has a much greater view of jubilee than simply giving back physical land. Like so often, the New Testament gives us the full spiritual meaning of what was first spoken of dimly, ‘naturally’ in the Old Testament (‘first the natural, then the spiritual’ 1 Cor. 15:46).

This leads to a second point. If we are going to entertain a re-enactment of O.T. jubilee to give back land to aboriginals are we not also saying that the modern state of Israel has the right to persecute Palestinian Christians and Muslims in order to re-establish the land literally promised to Abraham’s descendants in Genesis? Again, a proper New Testament understanding of who comprises Abraham’s descendants (see Gal. 3, Rom. 8-9) removes the compulsion for Christians to blindly ‘stand with modern Israel,’ as it regularly and aggressively engages in human rights violations to reclaim its ancient borders.

Instead, let us recognize that Jesus masterfully fulfilled the Law (and the Prophets) in his life and death. For this reason the true, spiritual meaning of jubilee has been revealed through Messiah, and as a result we look to him for its proper fulfillment, not Leviticus 25. Like Israel’s exodus from Egypt and entry into the Promised Land there is a much larger meaning in view regarding Israel’s story (1 Cor. 10). Ancient Israel’s true promised land was Jesus himself (see the book of Hebrews), and so likewise, the greatest gift we can give to our First Nations friends is the gift of personally knowing the Messiah who came to proclaim a perpetual jubilee for all mankind through the forgiveness of their sins (just like us). That is where true reconciliation is found (2 Cor. 5), not in real estate.