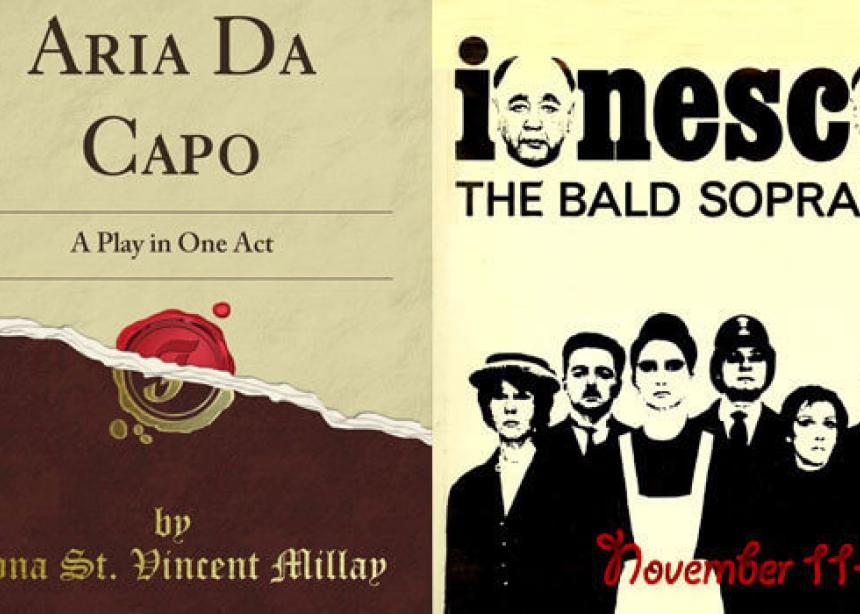 The Winnipeg Mennonite Theatre is a long-standing hidden gem of Manitoba’s fine arts scene. The amateur company is just that—a group of honest-to-goodness theatre lovers, whose Mennonite faith convictions enliven their artwork with a spirit of community service and vivid, conscientious story-telling. They are one of the only theatre companies in Canada that still presents plays in German, and regularly features new plays by local writers, often on explicitly Mennonite themes.

At first glance, Ionesco’s The Bald Soprano, and Millay's Aria da Capo might seem a strange couple on the WMT playbill—one, a staple of French absurdism, the other, a pacifist verse play. The first, famously disjunctive, the second, laced through with elevated aesthetic elements like harlequins, opera terminology and Greek character names. However, a little reflection reveals more kinship between the two than first expected. Both are classic modernist one-act wonders, born out of earth-shaking experiences the whole world shared: namely, a world war, or two. As a result, both plays ultimately ask very similar questions, though in different ways and naturally suggesting different conclusions.

The Bald Soprano, first performed in 1950, deals with issues of communication: is it possible at all between humans? How do the various alienating influences specific to the modern world frustrate our attempts at meaningful connection?

Aria da Capo demonstrates how human beings fabricate unnatural divisions among themselves, which erode the human consciousness, breeding suspicion, environmental abuse and violence. Both plays, at base, powerfully examine the subject of human isolation.

Terry Zimmerly, director of Aria da Capo and pastor at Home Street Mennonite Church says he chose the play because “It’s a classic; and as a peace play with a lot to say about how we treat the earth and each other, I thought it would be well suited for Winnipeg Mennonite Theatre, especially given the way political discourse is being used right now, in the United States and elsewhere. The other piece, The Bald Soprano, is all about language and Aria da Capo deals with that too—how language can be leveraged to create fear.”

Zimmerly says that while the play was originally written in the wake of the first Great War, which now lies even farther from living memory than World War II, he “certainly considers it a contemporary in terms of how it speaks to us today. When she wrote the play, Edna St. Vincent Millay was disgusted by how the elites and socialites were reacting to the tragedies of World War I. The play really shows us how easy it can be not to pay attention—to first nations, to the Middle East, to refugees, to what’s going on in the United States, what's happening to the environment. We see the aftermath of all these things, in theory, but often we're not moved by them. Our pleasures and comforts make it easy to turn a blind eye.”

Asked whether he believes audience members will fully absorb the present relevance of Aria da Capo, Zimmerly demonstrates incisiveness which is so necessary to good directing.

“I think one of the beautiful functions of art is that it helps some to see or hear who have not been able to see or hear before. The message can get across when it didn't at other times, from other angles. In a play, meaning and message can surprise us—it's like scripture that way, it's a living word. And sometimes it can even speak beyond what the author originally intended or expected.”

Come February, Agatha Christie’s “And Then There Were None” will show as part of the Royal Manitoba Theatre Centre’s Master Playwright’s Festival. But first—starting November 11th at le Cercle Moliere—Eugene Ionesco and Edna St. Vincent Millay, together with the Winnipeg Mennonite Theatre company, will teach Winnipeg the art of remembrance.